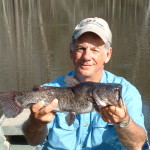 Catching bullheads and cats at night can be dangerous!

Watching a hospital show on TV last week brought back bad memories for me. On this show a guy came into the emergency room complaining about something in his ear. When the nurse looked into his ear with a flashlight he was horrified. One of his nightmares, a spider, was in the guy’s ear.

When running bank hooks at night at Clark’s Hill we usually checked them a couple of times after dark. Willow trees overhanging the water were good places to tie hooks but presented some problems. Lots of critters liked to hang out in those trees.

One night Linda was holding the flashlight while I baited a hook. When I stood up my head brushed one of the higher branches and I felt something on my ear. I brushed at it and told Linda to shine the light to see what was there.

Big mistake. It was a spider. Spiders don’t like light, so it went into the nearest dark hole it could find – my ear! I could feel it scrabbling around down in there on my eardrum, as far in as it would go.

Somehow I managed to get back to the trailer at the boat club and went inside. Mom and dad and Linda all tried to help, shining a light in my ear to see if they could do something but that just made the spider try to get away from the light, going deeper into my ear. I was about to go crazy feeling that thing moving around in there.

Finally mom poured some baby oil into my ear and the spider, not wanting to drown, popped out. It fell on the table and I hit it so hard with my fist the table jumped and made everything on it turn over. But that spider didn’t get back into my ear!

Another night I had just checked a hook and baited it up. When I stood up I grabbed a limb to steady myself and caught a glimpse of something that made my heart stop. There was a huge wasp nest about two inches from my hand and a foot from my face.

Luckily, wasps don’t fly at night and none came off the nest. But it was one of the worst scares I had running hooks.

As the front of the boat eased under the tree I grabbed a limb to steady myself and something made me shine my light on the limb. A few inches from my hand a water snake was lying on the limb, probably asleep. I didn’t scream or anything, I just told Bobby to back us out – in a very squeaky voice.

Harold figured out what was going on and later said he was afraid to move, he was expecting something to fall on his back any second. We all had a good laugh about it but went to the truck, got a .410 and sent that snake to reptile heaven.

If you fish at night you will have some exciting memories – if you survive them!