Why Take Your Kids Fishing
By Greg Wagner, Nebraska Game and Parks
from The Fishing Wire

It’s a sport. It’s a hobby. It’s a profession. It’s a pastime. It’s a lifestyle.

As a parent, I can tell you firsthand that spending time fishing with your son or daughter can be a key cog in their emotional development and mental well-being, as well as a contributing factor to what is referred to as a filial bond. And, it continues through the years and never really stops. In fact, it rolls on further with grandchildren. 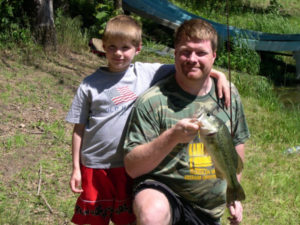 My young son, Noah Wagner, and dad, your blogger. Photo by Polly Wagner of Omaha, NE.

There are reasons why you should take your son or daughter fishing repetitively from the formative years through adulthood. As a parent, you should understand when you introduce your child to fishing, you are introducing them to far more things than than just “fishing.”

In the fast-paced world of everyday life, it’s not easy to set aside a a bunch of time to spend one-on-one with your son or daughter, especially as they age. Taking a fishing trip, whether it’s an extensive one that will require multiple days or just a morning or evening affair, allows you to focus all of your energy and attention on your child, no matter what age. In order to have a strong parent-child relationship, you have to forge a strong emotional bond with your son or daughter while they’re still young. Fishing together allows the two of you to get to really know one another as individuals, to chat openly and enjoy each other’s company.
Fosters Conversations. The quiet stillness of a lake shoreline or river bank, and the relaxing nature of waiting for fish to bite fosters plenty of conversation, some of which may be awkward to broach elsewhere or with other family members over the dinner table. The natural evolution of your discussions can and do lead to more than one topic you most likely wouldn’t discuss under different circumstances.

In a society where young folks show their parents the know-how and intricacies of new technology, it can feel like there isn’t much left in terms of skills that adults pass on to their children anymore. Fishing teaches kids the virtue of patience and diligence in an environment where entitlement has become an unrealistic expectation. But, the age-old art of hands-on fishing — tying on an artificial lure, baiting a hook, casting a line and working that lure or bait to try to catch fish is comprised of real skill. Fishing truly is a lifestyle, and it’s one that is difficult to learn from a YouTube video.

As your youngster builds their skills and become more successful, they build their self-confidence. This also leads to a stronger self-concept and greater independence. As children see they can be successful in fishing, they carry that confidence over to other parts of their lives through the years like school, sports, work, the military and even developing friendships and other interpersonal relationships.

As your son or daughter gets older and has less time to spend with you, windows of short periods of time may pop up for fishing, be ready and take advantage of those with them! The memories of your shared fishing trips, whatever duration, are engrained forever. And, when your young folks become adults, those cherished memories come in the form of stories. They will become fodder for pleasant reminiscences, however humorous, serious or embellished.

For us outdoorsy parents, the opportunity to share a passion for and appreciation of nature with a child is an invaluable one. Instilling a love of the outdoors and a sincere respect for wildlife, fresh air, sunshine and screen-free entertainment is a terrific way to combat the effects of technologically-advanced, indoor-based living where video games rule the day. With fishing, you’re perfectly positioned to pass along the basic tenets of environmental stewardship without seeming like you’re lecturing or preaching. You can guide your son or daughter in the right direction by demonstrating or modeling earth-friendly habits such as picking up litter, gathering discarded fishing line for recycling and properly releasing a fish.
Allows for a Lower-Tech Experience. Even though a Smartphone or iPhone may be carried on your fishing trip to capture or share moments, there are no larger digital screens available in the outdoors. This translates to no video games, big-screen TVs, tablets or computers on the water, which means that for at least for a few hours, a lower-tech good time can be had while still documenting the fishing experience with mobile devices. What better way to limit screen time than to by taking youth where those major screens aren’t available, but still have some modern technology available and good old-fashioned fun on the menu?
Establishes a Shared Hobby. A shared hobby allows you and your offspring a bit of common ground, something that will become even more important as they get older and look for ways to assert their independence. The enjoyment of fishing the two of you share may be one of the few ways you’re able to effectively communicate during the turbulent times of adolescence and young adulthood.

. Many see fishing as an individual activity but what most people don’t comprehend is that beyond the family, there are communities and groups centered around fishing. From the Small Boat Bass Club to the Nebraska Walleye Association to Trout Unlimited, there are a plethora of organizations in Nebraska for young folks and others to join to make new friends, enjoy camraderie and learn more about the specific facets if fishing for various species. There are also a number of fishing tournaments to enter that bring young people and anglers of varying ages together for fun and friendly competition. Just recently, Game and Parks and the B.A.S.S. Federation just hosted the State High School Bass Fishing Tournament held at Lewis and Clark Lake in northeast Nebraska where 18 teams participated.

Recreational fishing has been shown to be a wonderful stress reliver as well as an ideal way for anyone to relax, especially young people. It can also be seen as an excellent form of exercise, calorie burning and Vitamin D intake. Fishing strengthens the mind of young individuals by requiring the use of visual-spatial and problem solving abilities. It enhances hand-eye coordination and balance. In addition, research indicates that by preparing the catch of the day for supper (legal selective harvest), it typically leads to healthier eating habits. By combining these things together, fishing can contribute to healthier lifestyles, particularly with youth.
My 20-year old son, Noah, realizes that fishing is about catching fish, but much more. Actually, he called me the other day to go fishing with him, so we went. While we were rigging worms on our hooks for channel catfish, I asked him: Is fishing just about catching fish? His response: “Of course it is, dad. I like to catch fish, and big fish, but I’ve also waded into lakes and rivers just to let the water wash around me — casting my line, standing and watching, as frogs plop into the water and dragonflies land on the tip of my rod, while you and I talk, dad.” ” Yeah,” Noah adds, “I’d say fishing is more than just the fish.”

A native of Gretna, NE, a graduate of Gretna High School and Bellevue University, Greg Wagner currently serves as the Public Information Officer and Manager for the Nebraska Game and Parks Commission’s Service Center in Omaha. On a weekly basis, Wagner can be heard on a number of radio stations, seen on local television in Omaha, and on social media channels, creatively conveying natural resource conservation messages as well as promoting outdoor activities and destinations in Nebraska. Wagner, whose career at Game and Parks began in 1979, walks, talks, lives, breathes and blogs about Nebraska’s outdoors. He grew up in rural Gretna, building forts in the woods, hunting, fishing, collecting leaves, and generally thriving on constant outdoor activity. One of the primary goals of his blog is to get people, especially young ones, to have fun and spend time outside! 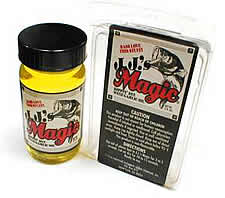