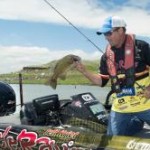 On a recent trip to South Dakota’s Lake Oahe, often described as one of the nation’s premier smallmouth bass fisheries, Yamaha Pro Jeff Kriet left most of his fishing tackle in his truck. He didn’t forget it; he knew he wouldn’t need anything except two spinning rods and a box full of small soft plastic lures. By day’s end, he’d caught and released more than 30 smallmouths.

“For me, summertime smallmouth fishing in clear water means using finesse tactics, not heavy tackle,” explains Kriet, a veteran Bassmaster® Elite angler known for his expertise with light lines and small lures. “Once the water begins warming, the fish normally move a little deeper and for some reason also become a little more choosy about the lures they’ll hit.

“My own favorite presentation is a drop shot, in which the lure is located about a foot above the sinker, because it allows me to keep that lure in the strike zone as long as I want to, and it looks completely natural in the water.”

Among tournament pros like Kriet, the drop shot has become an extremely popular bass fishing technique because it also works in both shallow and deep water and brings strikes when other presentations fail. Kriet, in fact, admits he always has a drop shot outfit on his boat deck wherever he’s competing. 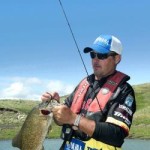 Slow is the way to go

“I start with six pound test fluorocarbon line on a medium action spinning reel,” explains the Yamaha Pro, “and generally tie either a 3/8 or 1/4 ounce sinker at the end of my line. Then, about 12 inches above the sinker, I tie a small No. 1 hook and thread on either a thin four inch plastic worm or some other lure that looks like a small shad.

“After I make a cast, I let the sinker reach bottom and then slowly drag it along until I reach some type of cover, like rocks, or logs. Then I just let it sit there and barely shake my rod to make the lure move. I really think the key to drop shotting is not over-working the lure with a lot of hops and jumps. The lure is not intrusive and the bass aren’t frightened by it the way they may be by larger, noisier lures.”

At times, summer smallmouth may also be suspended, and when Kriet sees them this way on his depthfinder, he usually fishes the drop shot vertically by simply dropping the lure straight down to them. Frequently, smallmouth either hit the lure as it falls, or they follow it to the bottom and then strike.

“One of the common misconceptions about a drop shot is that it is strictly a deep water technique,” Kriet continues, “but I frequently fish a drop shot in water less than five feet deep, and I know some pros who tie their hooks just three or four inches above the sinker and fish in water only a foot deep. Even rigging this way keeps the lure above the bottom, which allows bass to see it clearly.”

The drop shot rig uses a weight of 3/8 to 1/4 ounce about 12 inches below a number 1 hook, rigged with a 4-inch plastic worm or small plastic shad.

Another misconception about drop shotting, he adds, is that constantly shaking the lure will make it appear more natural to smallmouth, but in reality, just the opposite is true. In most instances, just barely moving the lure is more effective.

“I always shake my rod with a slack line so the sinker stays in place on the bottom and only the lure moves,” concludes the Yamaha Pro, “and I just barely twitch the rod instead of really shaking it like I sometimes do with a larger jig. The lure is going to be moving even when I’m not shaking the rod, due to water currents, and that’s the way a real minnow or shad behaves.

“When you fish a drop shot this way, just dragging the sinker slowly along the bottom and barely shaking your rod tip, it really becomes an easy way to fish for summer smallmouth, and best of all, it’s also one of the most effective ways to fish that I know.

“That’s why, when I see clear water in the summer, I know I can leave the rest of my tackle in the truck.”