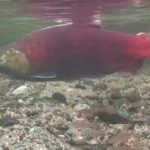 Sockeye salmon from the salmon cam

EDITOR’S NOTE: The following was provided to The Outdoor Wire by the U.S. Forest Service

Through the end of August, you will get the chance to be entertained as sockeye salmon swim along Alaska’s Steep Creek as the adults spawn before swimming to their deaths.

The Forest Service has placed the salmon cam in the creek on the Tongass National Forest so viewers world-wide have the opportunity to view fish in their natural setting. The ability to watch salmon in the wild is a treat for many people, but the underwater camera gives you a more intimate, unique look.

“The overall escapement, or numbers of fish that reach the spawning grounds, for Steep Creek sockeye varies from year to year,” said Pete Schneider, a fisheries biologist on the Tongass. “An average run would be considered 1,000 fish. We have seen it as low as 350 and as high as 4,000. So many factors can contribute to run size. It’s difficult to predict. So keep watching.”

Early in the spring sockeye fry emerge from the gravels and move into Mendenhall Lake and Mendenhall River sloughs and ponds, where they feed for 1-3 years before migrating to the ocean. After spending several years at sea, the adult sockeye return to Steep Creek to spawn, their last act before they die.

But all is not lost. The dead sockeye are still good meals for a variety of forest critters, including their own fry and as their nitrogen-rich carcasses decompose they provide valuable nutrients into the ecosystem.

If you see the view clouded, it could be because a female salmon is building her redd (gravel nest) by agitating the bottom of the creek bed with her fins and tail. She then bends her body back and forth to make a depression where she deposits her eggs. A male then moves in and deposits his milt, or sperm, over the eggs after an often lengthy courtship. The female uses her tail fin to cover the redd then moves upstream to do it again. Female salmon will often build multiple redds in the same general vicinity and then guard them as long as they can before eventually dying.

Sockeye salmon are held in high regard in Alaska. They are known for the high quality of their meat, bold spawning colors, unique habitat requirements and the fact that they can be tough to catch because they rarely bite on sport gear in salt water. Add all these factors together and sockeye rival king, or Chinook, salmon for the most attention.

“I typically leave the camera in place until the end of September. Often the water quality becomes too poor by October due to the amount of rainfall,” Schneider said. “The sockeye run will dwindle by the end of August. After a short lull for a week or two the coho salmon will arrive.”

Schneider said the coho run will not be as large as the sockeye. However, more Dolly Varden char enter the stream, too. Many Dollies arrive “early” to feed on loose eggs during sockeye spawning, but many more arrive in early fall to spawn. They spawn about the same time as the coho in different locations along the creek so they do not overlap with the coho, a process refined over years of evolution.

As the fish are making their way along the creek, Schneider and other Forest Service employees make daily counts. The third week of July they counted about 30 sockeye milling about in the beaver pond downstream from the camera.

“They are in full spawning colors, but are likely waiting until a rain event occurs. This lowers water temps and raises water levels, which often will trigger the movement of fish upstream to the actual spawning grounds and into camera view,” he said. “Unfortunately, I can’t move the camera downstream any further than I have to see them.”

Surprise guests for the fish and viewers could be a black bear or two. Bears that feed on salmon are larger because they eat. A lot. And salmon provide the high calorie diets they need to gear up for the winter hibernation.

“Bears will often target the female salmon for their eggs. Their keen sense of smell can detect the eggs, and I have seen them actually release a male and return to fishing for females,” Schneider said. “When salmon are plentiful, it is normal to see a carcass along the bank with only the belly eaten. The brains are also a high-calorie hotspot, even though they are smaller than a walnut.

“Make no mistake, however, as absolutely none of the salmon go to waste. There is a plethora of mammals, birds, insects, fungi, and plants waiting to make full use of the remaining nutrients.”