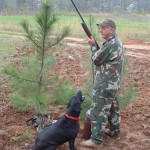 Rip loved to hunt – I really miss him

One of my all time favorite outdoor writers, Gene Hill, said “I can’t think of anything that brings me closer to tears than when my old dog – completely exhausted after a hard day in the field – limps away from her nice spot in front of the fire and comes over to where I’m sitting and puts her head in my lap, a paw over my knee, and closes her eyes, and goes back to sleep. I don’t know what I’ve done to deserve that kind of friend.”

Dogs are special. I know of no other creature that will give you unconditional love no matter how you treat them. They will protect you, be a comfort when you feel bad and make you even happier when you are in a good mood. They are loyal to you.

I have been lucky enough to have five such friends in my adult life. The only problem with dogs is they have such a short life span. You always lose them way too soon. They seem to be youthful and happy for years then suddenly they start getting old. In no time it is up to you to make sure they don’t suffer any longer.

Rip was special. He showed up at my farm uninvited and stayed around the barn. I had not had a dog in my life for about ten years and really didn’t want another one since it still hurt from having to put my first two down.

But Rip would run out and greet me, tail wagging and mouth smiling, every time I drove up. I tried to ignore him for a couple of weeks but he won my heart so I stopped and got food and water bowls, some dog food and a collar and headed to the farm.

As always he ran out to greet me but somehow slipped and fell. I felt the back tire of my truck bump over him before I could stop. When I got out of the truck he was standing there, looking at me like “uh o -I didn’t mean for that to happen.” Then he walked a few feet and blood came out with his urine when he went to the bathroom.

I was sure he would die so I didn’t even put the collar on him, but did put out some food and water. The next day I drove up and he ran out to greet me, wagging and smiling like nothing every happened. He surely didn’t blame me.

After putting on his collar I drove him to Memorial Drive Vet Clinic and had him examined. We could see the tire track across his lower stomach and hip. The vet said that was about the only place you could run over a dog and not kill it, but he might still have problems.

For the next ten years Rip lived at my house. He was rambunctious – I had to fence in the back yard to keep him from running off and getting in the highway, but he seemed perfectly happy. He was a mixture of lab and hound, and loved to chase and retrieve a ball. I had to hit a tennis ball with a racquet to make sure it went far enough so he would not get to it before it hit the ground.

Rip never barked. He also never met a stranger. I often took him to town in the back of my truck and usually someone would be petting him when I came out of the store. You could tell he was a happy, friendly dog.

The first time I got out my shotgun to kill a squirrel in the yard I was not sure what Rip would do. When I shot the gun he got excited and soon found the squirrel. In no time, if I walked out the door with a gun Rip started looking in the trees for my target. He seemed to learn to go around to the other side of a tree where I was looking for a tree rat so it would come around so I could shoot it.

Although gunfire didn’t bother him at all, he was terrified of thunder. In June during a late night thunder storm on Thursday night he dug under the fence and got out. Saturday afternoon we got a call that he had been hit by a car on Highway 19 not far from our house.

We took him to the emergency vet clinic in Fayetteville. We were real worried since he did not seem to know us and looked dazed. The vet treated him and said he was in shock.

A few hours later we called and they said he seemed to be resting comfortably but they were worried about him since he still seemed to be dazed, but they were hopeful. Then, at about 11:00 PM, they called and said he had gone into convulsions. They felt he had brain damage and said there was less than a 25 percent chance of recovery. I could barely get the words out of my mouth to put him down.

We picked up Rip’s body and brought him home. I wet the ground as I buried him under the pear tree beside Merlin and Squirt.

One thought on “Dogs Really Are Man’s Best Friend”