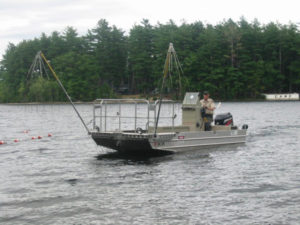 The electrofishing boat has two booms which deliver an electric current into the water.
Each year during late May and early June, the regional office gets a phone call or two about some strange things happening during the wee hours of the morning on some local lake or pond. I even had one caller exclaim once that a UFO had landed on the pond! If you see such a thing, rest assured it is probably not a UFO, but rather your regional fisheries staff working late nights to collect fishery resource information.

Each year about this time, the regional fisheries staff of the Sebago Lakes Region sample 2-4 different waters to collect baseline information on the bass population(s), as well as determine the relative abundance of other fish species. Sampling is done at this time of year during the night, because the fish are more likely to be in shallower water spawning and are less likely to be spooked by the approach of a boat.

Each bass is measured and weighed, so biologists get a clearer picture of the bass population in the lake.
This sampling is performed with an electrofishing boat. A what? An electrofishing boat has an onboard generator that delivers an electric current into the water, which temporarily stuns the fish so they can be collected with nets. Because the work is done in pitch black conditions, there are lots and lots of lights, beepers, and motor sounds…no wonder we get mistaken for aliens!

Prior to sampling, we survey the shoreline habitat of each lake (in daylight) and categorize the shoreline habitat into different habitat types (i.e. sand, cobble/rubble, muck with weeds, etc.) and mark the start and end of each with a GPS unit. Since most lakes are too large to sample the entire shoreline in a night. We then take the habitat data for the entire lake and develop partial sampling transects of each habitat type relative to their proportion in the lake. Once determined, coordinates for these sampling transects are entered back into the GPS, so we can navigate in the dark.

The boat hugs the shoreline and biologists are ready to net any fish that are temporarily stunned.
The boat is operated by a crew of three, one boat driver and two netters. Fish are stunned, netted, and placed into a live well for each transect. After one or two transects are sampled, the bass are anesthetized then each is measured, weighed, and returned to the lake or pond to recover. This work is repeated for each transect until completed, which is typically sometime between 2:00 and 3:00 a.m.

Sometimes the night drags into early morning, but the onboard work lights allow biologists to accurately measure and record the data they need.
To date, we have collected baseline data on about 50 regional bass waters. This baseline length, weight, size class structure and catch per unit of effort data (abundance) on bass gives us a basis for categorizing waters by fishery quality, comparing populations or performance among other regional waters, and for evaluating changes in population characteristics over time due to varying regulations, environmental conditions, or other variables.

The next time your “upta camp”, beware of those nocturnal biologists. Hopefully, we will not be interrupting your peaceful evening, but if we do…it’s all to evaluate, protect, and enhance our important fishery resources.

The controls at the helm of the electrofishing boat are a little more complex than most center consoles.

Once the fish are measured, they are released back into the water, so lunkers like this one can be caught again.