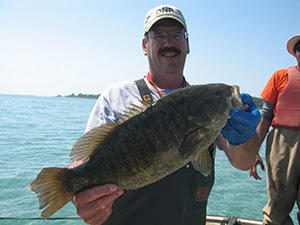 For so long it was believed that smallmouth bass didn’t travel that far or intermix their populations – especially in a large waterbody like Lake Michigan. But early studies, originating in the

Historical data on the northern Lake Michigan smallmouth bass population was collected via very limited surveys from the mid-1950s, through the late 1990s. Then in 2005, an ongoing smallmouth bass survey was launched jointly with Central Michigan University (CMU) to look at population trends in the species.

When the study was initiated, the Beaver Island Archipelago area was chosen as the main study area. It was the location of CMU’s biological station and more importantly the residents of Beaver Island were concerned about the local bass population believing increasing numbers of cormorants locally were the direct cause of the decline in the local bass population. In 2009, the study area was expanded to include the Waugoshance point area, then again in 2014 to include Grand Traverse Bay.

“Historically the local bass fishery was considered world-class and drew in a lot of anglers,” explained a DNR fisheries research technician out of Charlevoix, John Clevenger. “All of a sudden the fishery was low – the cormorant populations were high – and we wanted to try to see what truly caused the bass to decline.”

The initial study started to unravel some of the mysteries of these local bass – not limited by cormorants but rather these fish traveling to other areas of the lake. Researchers use small trap nets to capture smallmouth bass, place metal jaw tags on them and then return them to the water. In the first couple of years of the study, a select few bass were also surgically implanted with an acoustic tag. These fish were then tracked almost daily throughout the summer months to determine their whereabouts.

“We very quickly started finding fish – courtesy of jaw tag returns from anglers – outside of the Beaver Island archipelago area,” said Clevenger. “We started to realize these fish do move great distances. This study is now helping us understand how and why.”

The “why” is still a big question that has yet to be answered through the course of this 60-plus year study. Researchers have some good guesses, but specifics are hard to pinpoint.

“At some point in their life these fish are wandering,” said the DNR fisheries biologist out of Traverse City, Heather Hettinger. “They might be looking for food or for better habitat.”

That wandering is part of the reason the study expanded to other areas, with the potential for Lake Charlevoix to be added in the future. And while the “why” continues to go unanswered, lots of other great information is gleaned.

Hettinger explains between the fish captured or recaptured through this study each year – plus the jaw tags reported by anglers – they’ve developed this immense spread of data that gives a pretty clear picture of how the fish are growing and how the pattern of the population lays itself out. That information becomes critical when working on potential regulation decisions – particularly when concerned members of the public report a lack of big fish in the area.

“We have these great graphs that allow us to look over time and watch how these fish grow and where the patterns are,” she said. “If we hear concerns we can refer to these graphs and point out where we’ve seen drop-offs in larger fish or where we can refute their claims.”

The area currently has two different sets of bass regulations – Waugoshance and Grand Traverse Bay are the same but the harvest opener at Beaver Island opens later in the year. All three points are very popular with bass anglers – further proving the value of this study as the department manages the fishery for future (and current generations).

See below for graphs showing length distribution of smallmouth bass in the three areas this study covers. 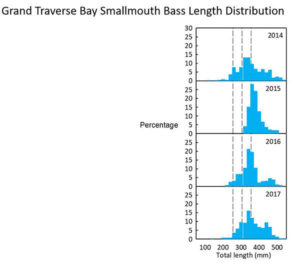 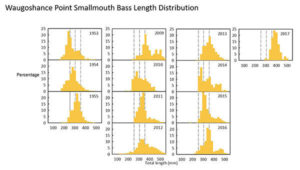 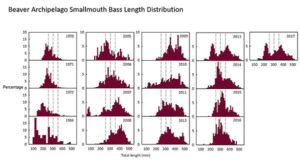