Greenback Cutthroats Get a Boost into the Colorado Back Country

This week, the endangered Greenback Cutthroat Trout got a major boost from Trout Unlimited volunteers and agency partners in Colorado.
from The Fishing Wire 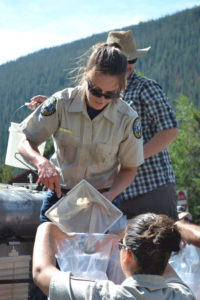 CLEAR CREEK, CO — Once thought to be extinct, the rare greenback cutthroat trout is making a big comeback thanks to the efforts of the Greenback Cutthroat Recovery Team – a partnership that includes the US Forest Service, Bureau of Land Management, US Fish and Wildlife, the National Park Service, Colorado Parks and Wildlife, the Western Native Trout Initiative, and Trout Unlimited.

Over the course of two days in mid-July, 1,700 Year 1 Cutthroats (~4-6 inches) made their way into two headwater drainages in the Clear Creek Watershed, an hour west of Denver, CO. The Dry Gulch and Herman Gulch creeks represent the first major river populations for this threatened species since it was rediscovered in 2012.

To help agency partners stock these important little fish, over 80 Trout Unlimited volunteers carried the cutthroats in large packs up steep switchbacks and bush-wacked through dense brush to get to the remote rivers. Some people hiked over six miles into the top of the drainage (over 11,500 feet)! These volunteers came from ten different TU chapters and represented all walks of life – anglers and conservationists coming together to recover this native trout.

“We couldn’t do it without the volunteers,” says Paul Winkle, Colorado Parks and Wildlife biologist for the Clear Creek Drainage. It was a major undertaking that took a lot of support from agency staff, non-profit partners, and local businesses.

At Colorado TU, we are very proud of the hard work and dedication that our chapters and volunteers provide to these projects. It shows what can happen when people focus on collaboration and overcoming differences. It didn’t matter whether someone was young or old, Democrat or Republican, a dry fly purist or never fished before – we were all side by side, climbing those steep trails together. All to save the Greenback.

That’s right! Over 80 volunteers and 20+ agency staff from Colorado Parks and Wildlife, US Forest Service, and US Fish and Wildlife service packed up 1700 native Greenback cutthroat trout to be released along Dry Gulch and Herman Gulch on July 16 & 18. These little trout were raised in a hatchery as part of a statewide effort to restore population’s of Colorado’s state fish. I’m not sure if you can tell if a fish is happy, but those little guys sure looked excited to be released into their new home. Check out the video spotlight that CBS Local Channel 4 did about the effort, below:

Feeling inspired? Learn more about Native Trout across Colorado – the efforts to protect and restore populations and ways to get involved.

Volunteers gather before setting off to deliver native trout to their new home. Volunteers and staff from:

A big shout out to all the volunteers who came out to hike and haul the native trout to their new homes, and to the various groups and agencies that came out to restore Colorado’s native fisheries. Read the full story that CBS Channel 4 News did here.

Thank you to the following: