I love any kind of fish or seafood stew or chowder. Anytime I go to a restaurant I check and order it if it is on the menu. And I make several kinds at home from the fish I catch.

I filet all my fish first. Sometimes I save the bones and little bit of remaining meat on them, especially if I am making my version of a Manhattan style fish stew. The bones give it a stronger fish flavor and make a good stock for this kind of stew.

For my Manhattan style stew, I filet about five bass and keep the filets and bones. This will make about six quarts of stew, and it freezes well. After washing carefully, I put all of the bones in an eight quart pot and cover with water, keeping the filets to the side in cold water in the refrigerator. As it starts to warm I add a few bay leaves, salt and pepper and some other spices like thyme if it sounds good. i bring this mixture to a boil and turn the heat back to barely keep it boiling until the meat is done and white and the bones have time to flavor the stock, about 30 to 45 minutes. But the time is not critical, a little longer just makes the flavor stronger.

While the stock is boiling I fry about six strips of bacon in a frying pan until they are crisp. 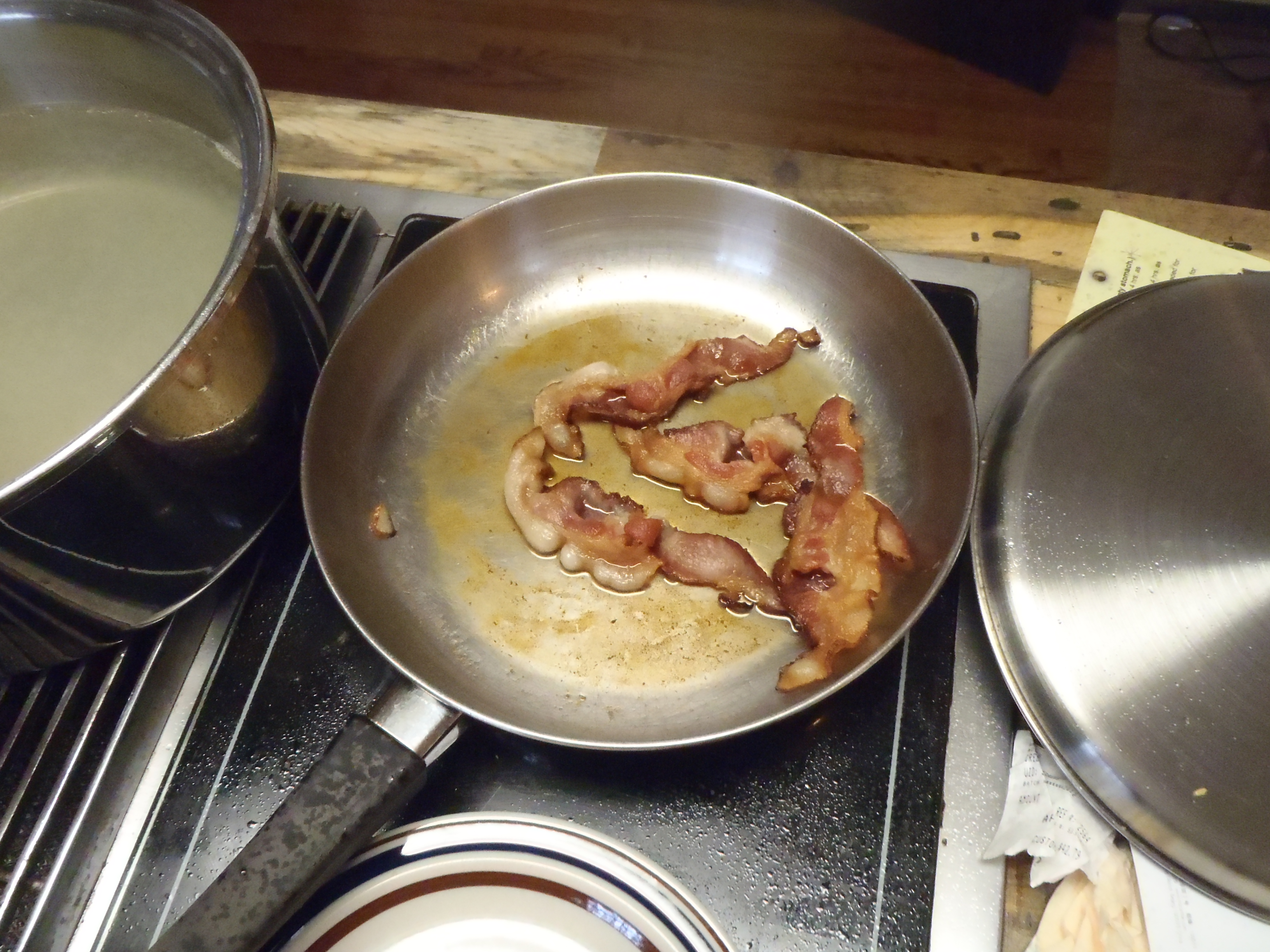 Fry about six strips of bacon until crisp

Remove the bacon and sautee onions in the bacon grease until slightly brown. You can skip this and add the chopped onions raw, but I like to brown mine. Chop them as coarse as you like. Sometimes I use a blender and chop them very fine, other times I just coarse chop them. 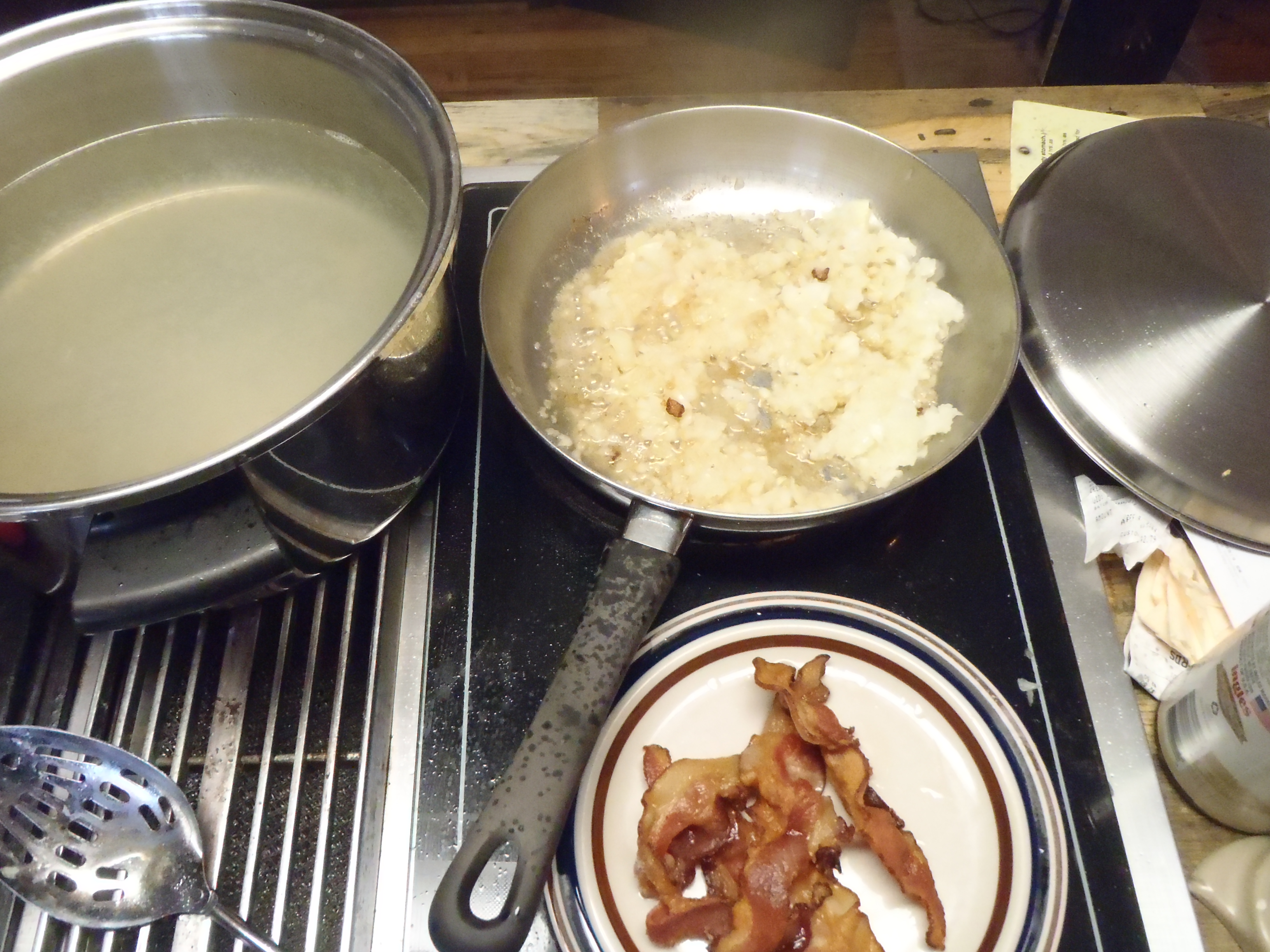 Crumble the bacon and add it to the onions for more flavor. Let it cook a few minutes then remove from heat. 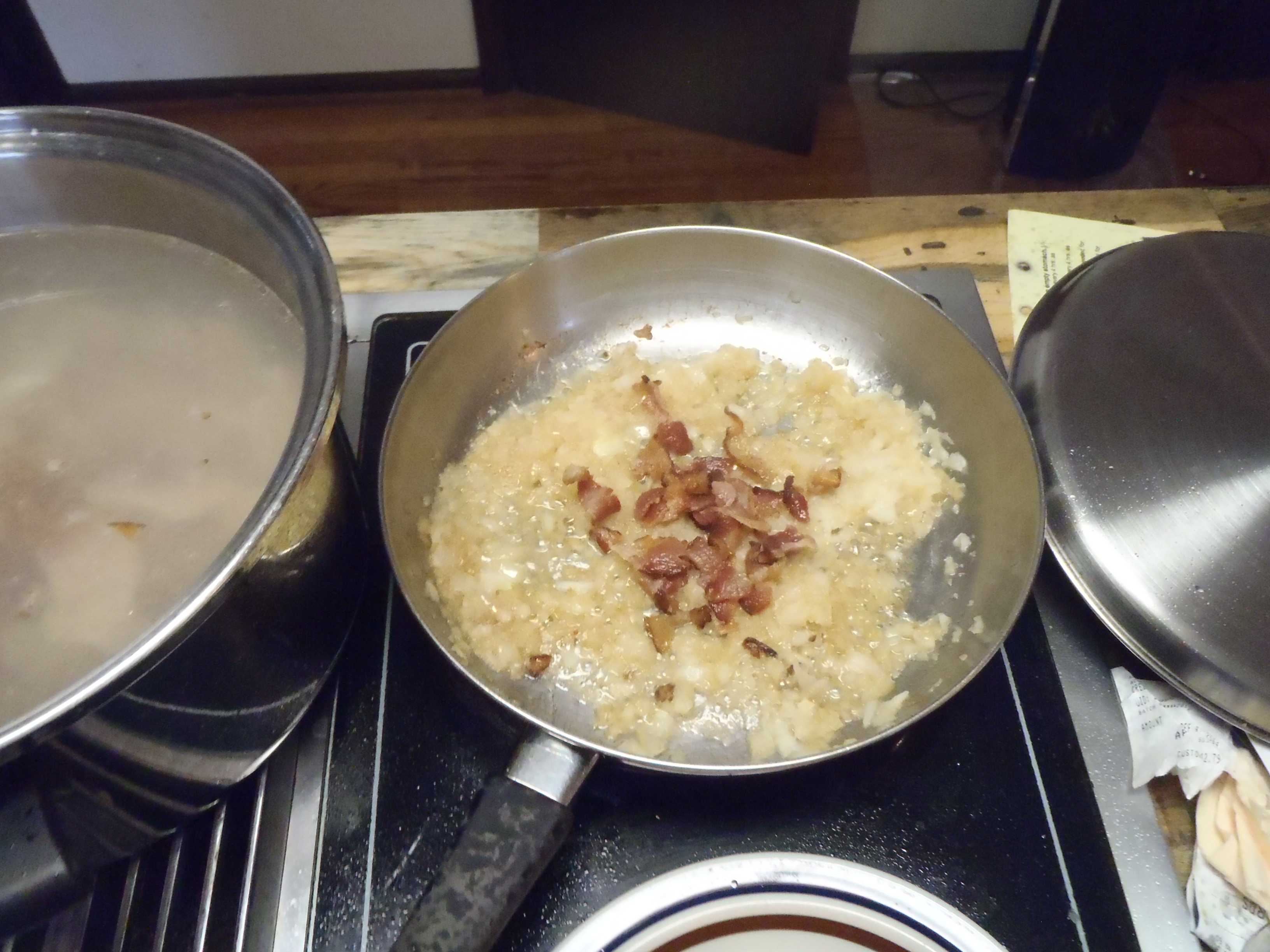 Crumble the bacon and add it to the onions

Drain the broth to remove all the bones. 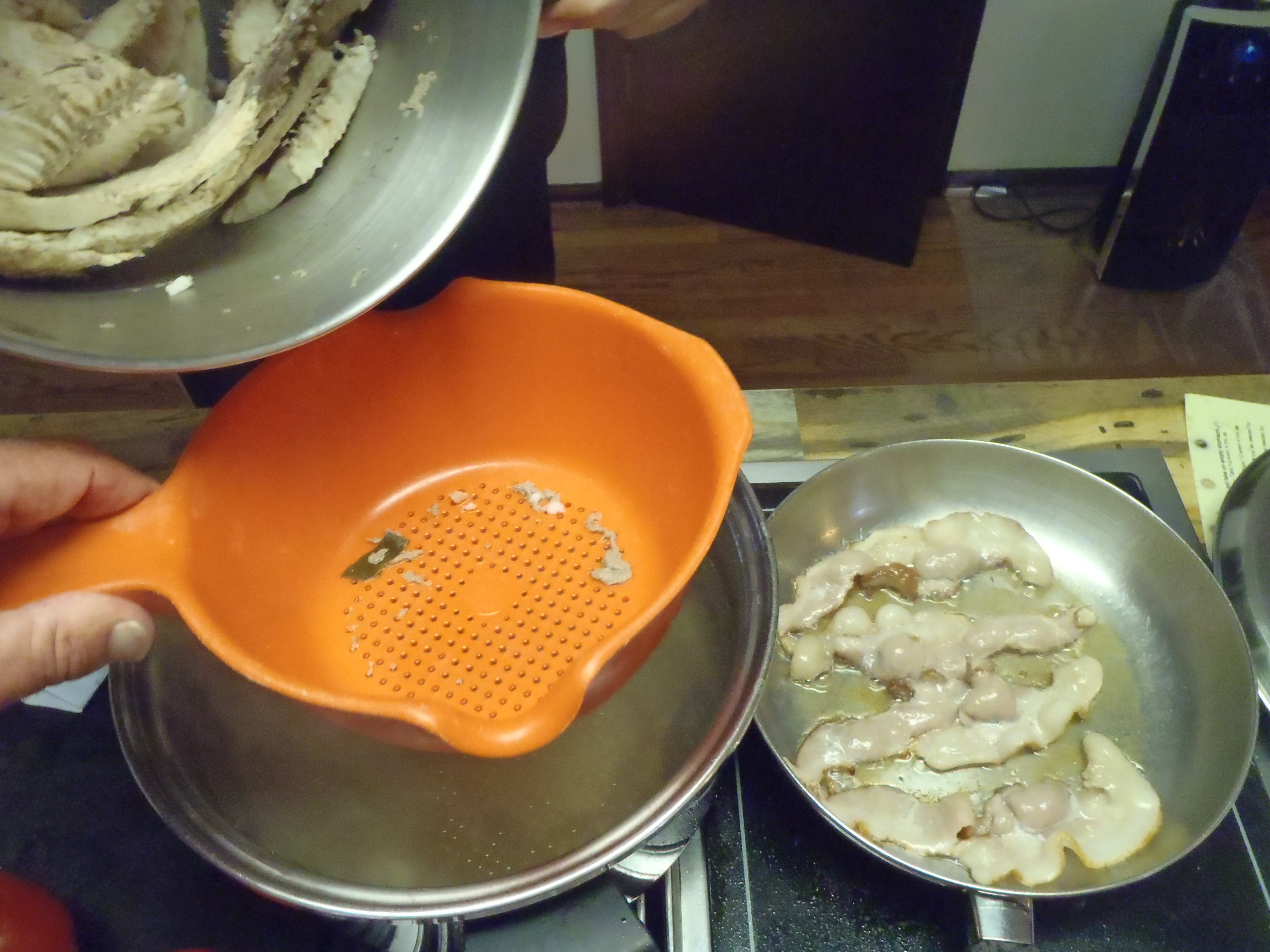 Strain the broth and get all the meat off the bones

Take the meat off the bones and add that meat back to the broth. I carefully squeeze every bit of this meat to make sure there are no small bones in it. 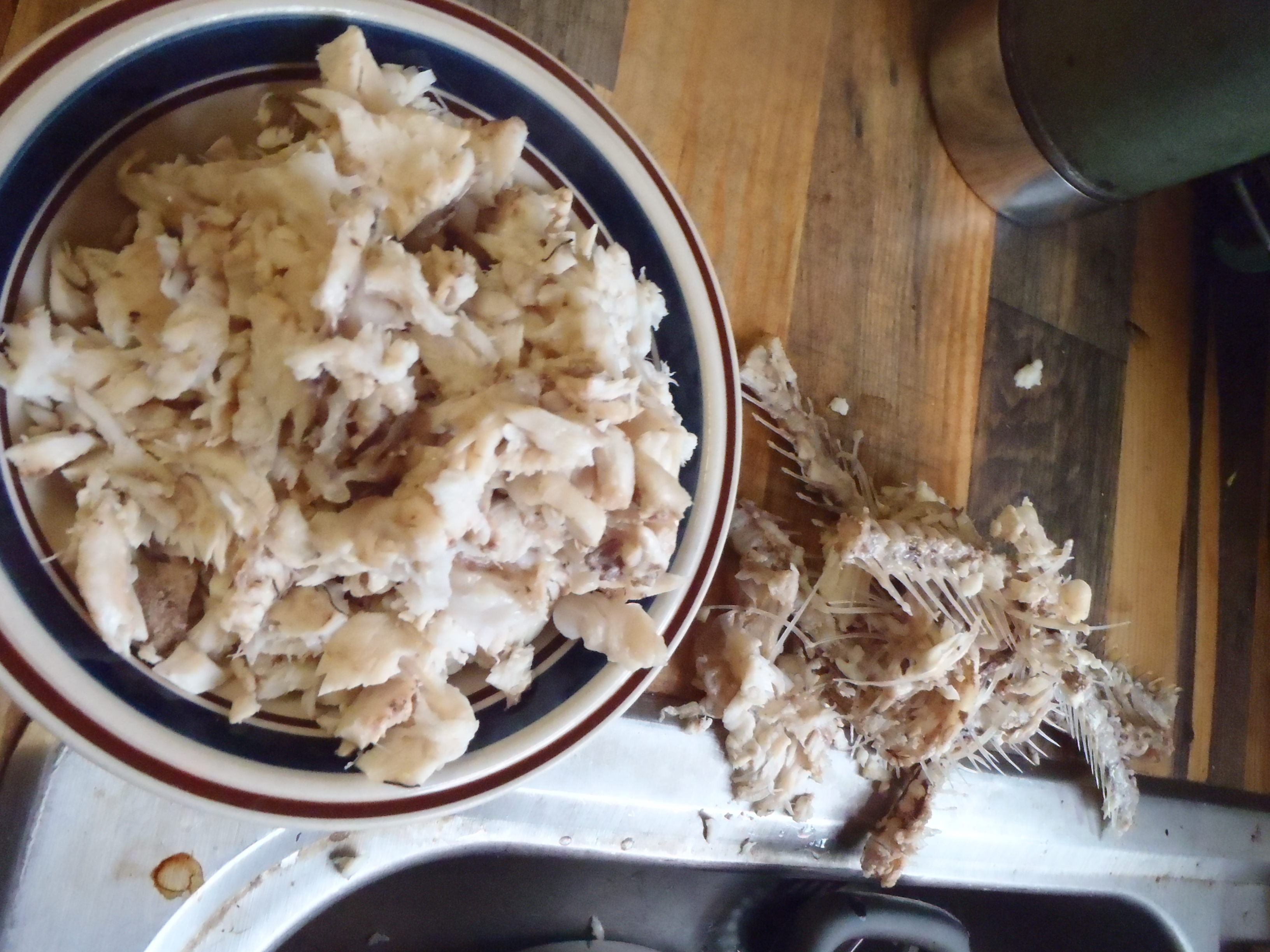 Add onions and bacon to broth as it simmers. 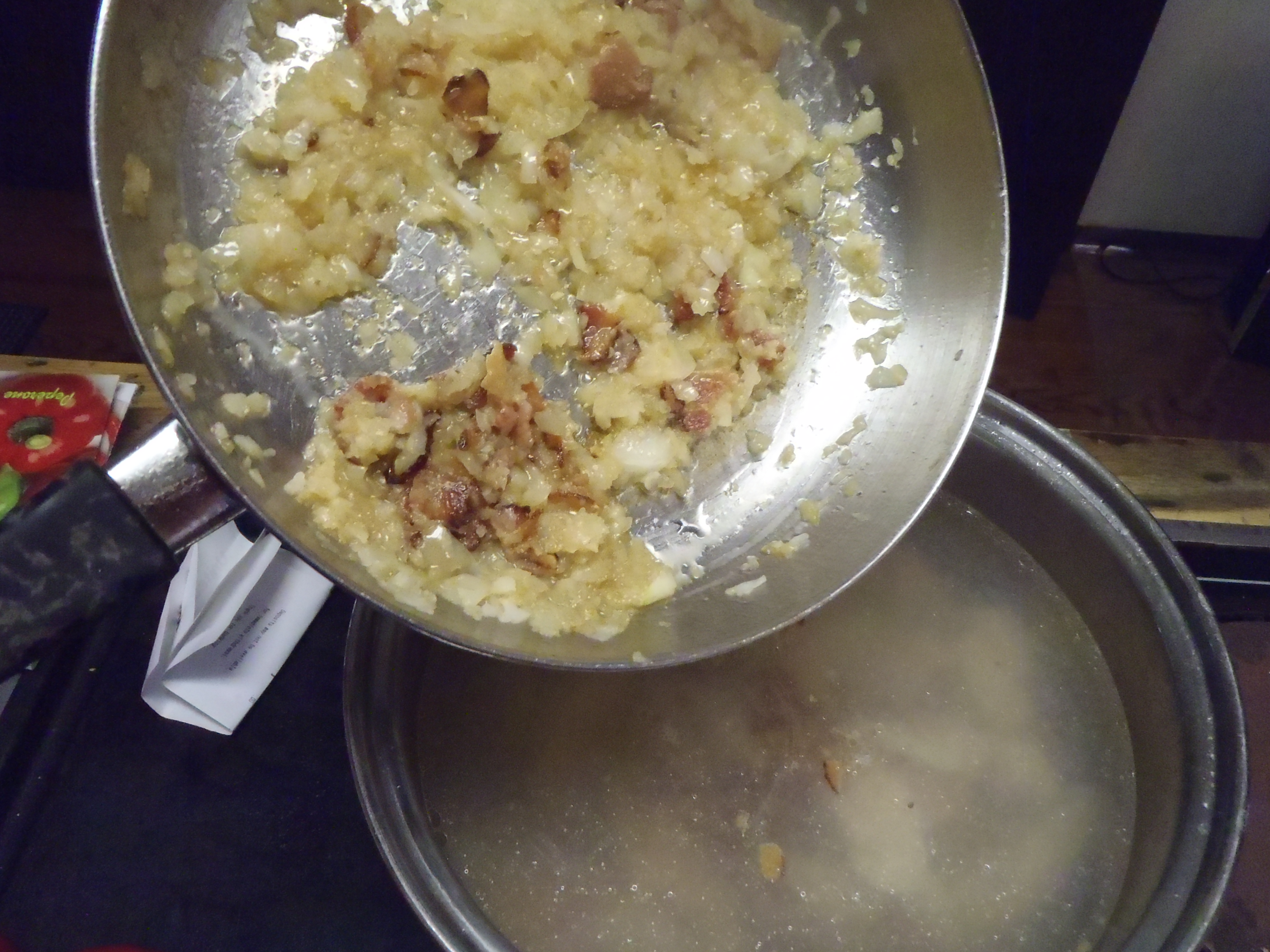 Add the onions and bacon to the broth

Cut the fish filets into chunks – I like mine about 1.5 inch squares. Add the fish to the simmering broth. 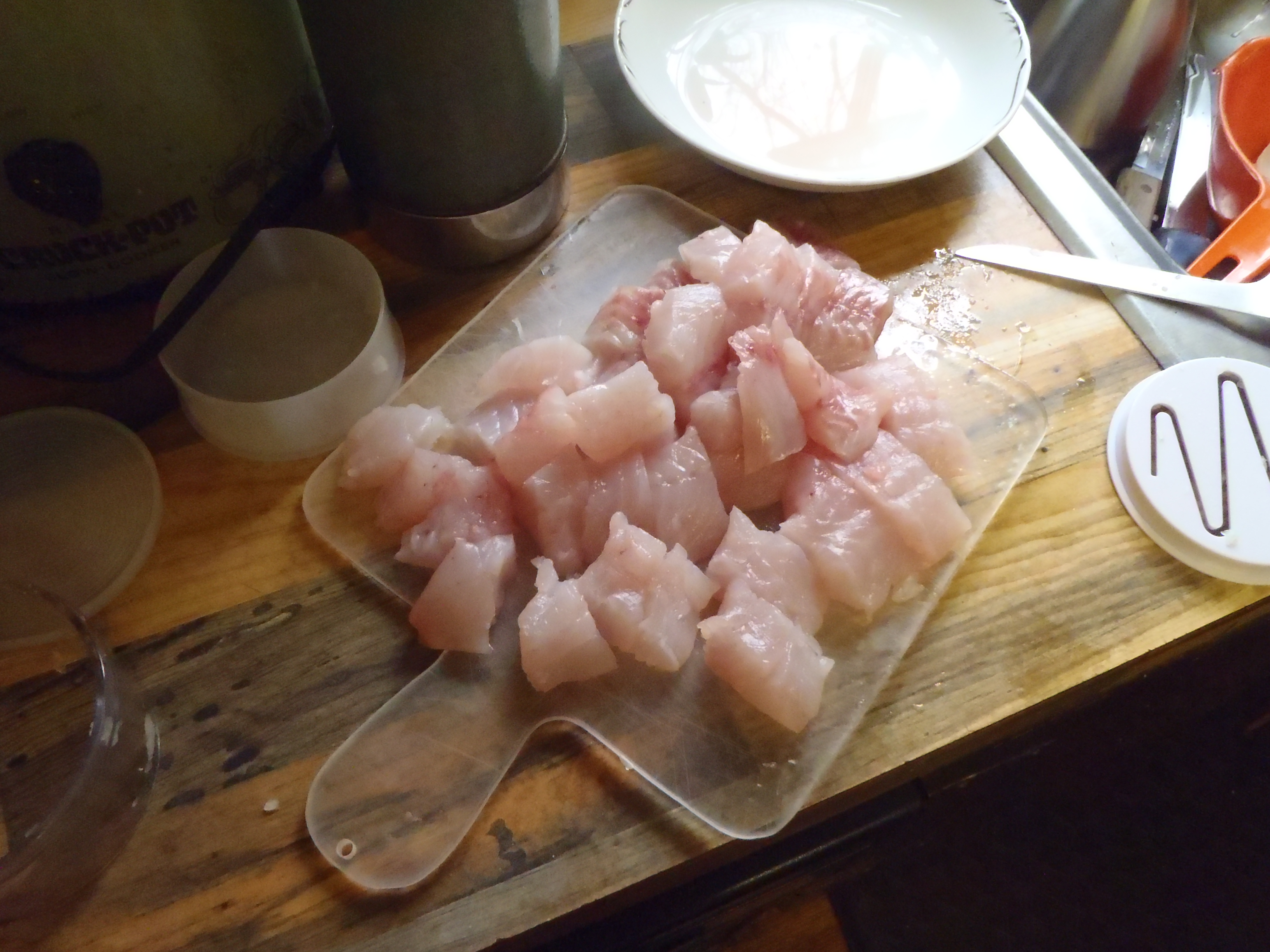 Cut the fish filets into chunks and add to the stew

Add a can or two of diced tomatoes to the stew. I like to use tomatoes with chilis in them for a little kick.

Add a can or two of diced tomatoes, with or without chilis

I like a very tomato flavored stew, so I add a can or two of tomato soup, paste or sauce. Add enough to suit your tastes.

Simmer for an hour or so and it is ready to eat! For a heartier stew, add some rice to the stew and cook until the rice is done. Or for variety, cook the rice separately and spoon the stew over it. I like my stew straight and eat it with saltine crackers. I do like to add some Tabasco or other hot sauce to spice it up – sometimes I like it HOT! 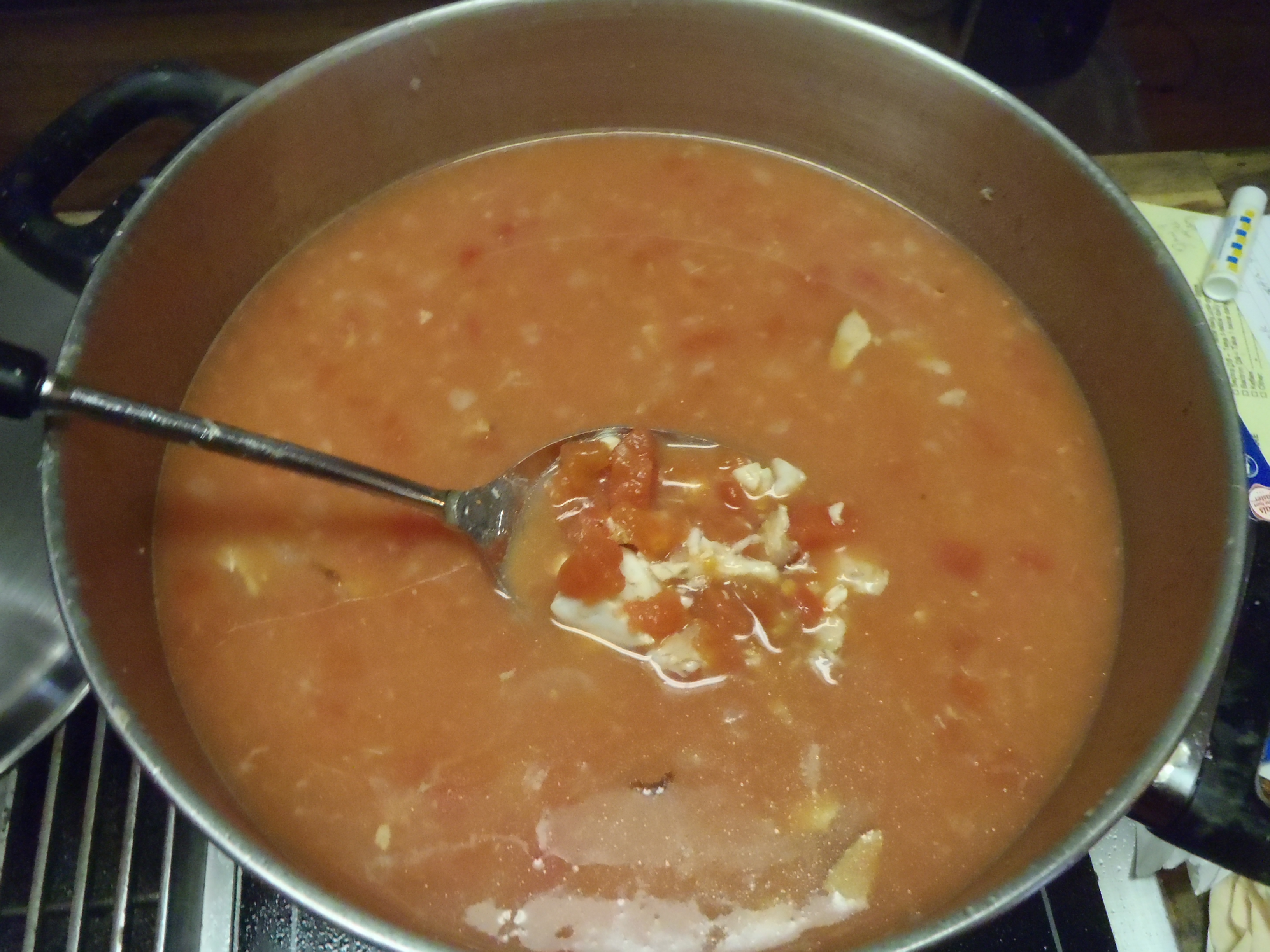 Simmer for about an hour