I love to catch fish – I never met one I didn’t want to catch – but I like to eat them, too. I know those fanatical about catch and release will be upset, but I believe in catch and hot grease, too, even for bass. I keep a lot of the spots I catch, especially in area lakes where they are not native and cause problems, and cook them just about every week. I have many good recipes for fish.

When I filet fish getting ready usually takes more time than the fileting. I like to leave fish on ice overnight before fileting them. When I am ready to go to work, I get my filet board – a 2×8 about three feet long, and put it on top of a big trash can so it will be about waist height. I hone my big filet knife with a steel so it is very sharp. Some folks like an electric knife and some are good with it, and I use one if I am fileting a lot of fih. But since I usually filet five or fewer fish, I like my regular knife. It is slower but more precise. And I take a bowl big enough to hold the filets with me and set it nearby. 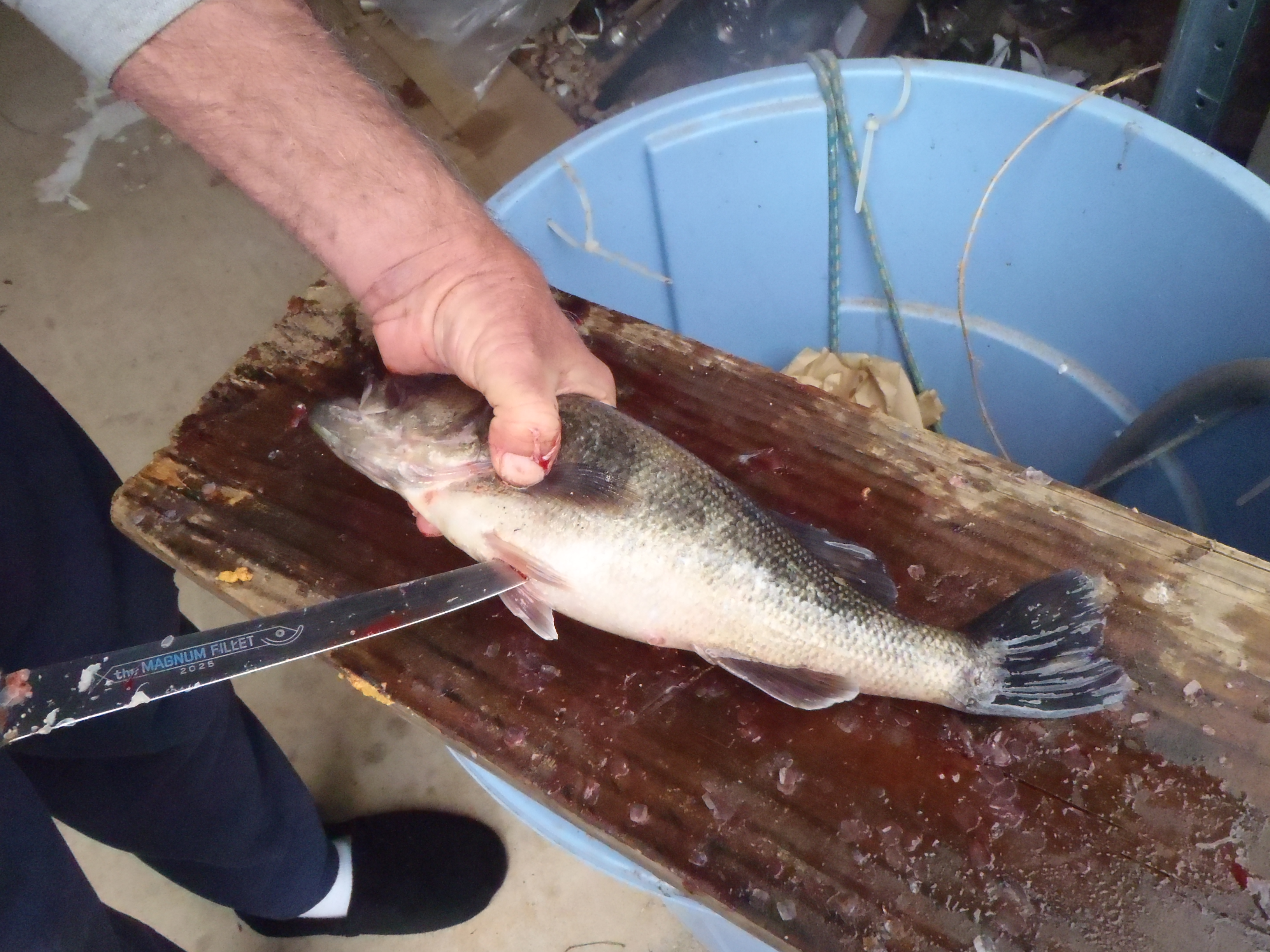 I then turn the fish so its back is toward me and cut straight down from the slice in the belly to the top of the fish. Cut as far forward as possible to get the most meat.

Cut to the backbone

Flip the filet over, place it flat on the board, and slice along the skin between the skin and meat in the opposite direction. You can make this slice if you cut through the skin at the tail but it is easier to hold if it is still attached. Keep the knife blade at a slight downward angle. 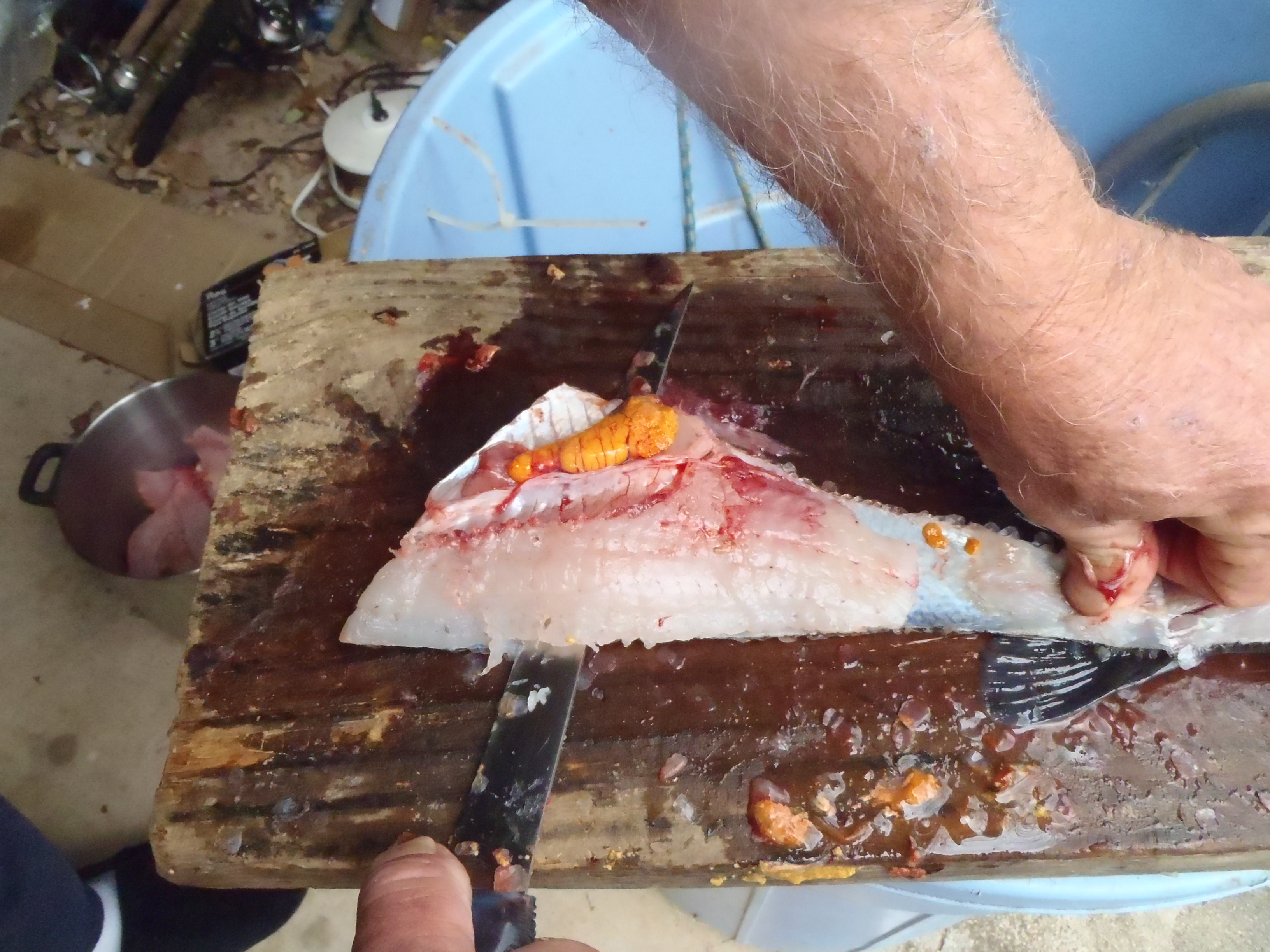 Slice from the tail to head between meat and skin

I cut the ribs out since I want a boneless filet. Unless I am planning on making fish chowder I throw them away since there is very little meat on them. 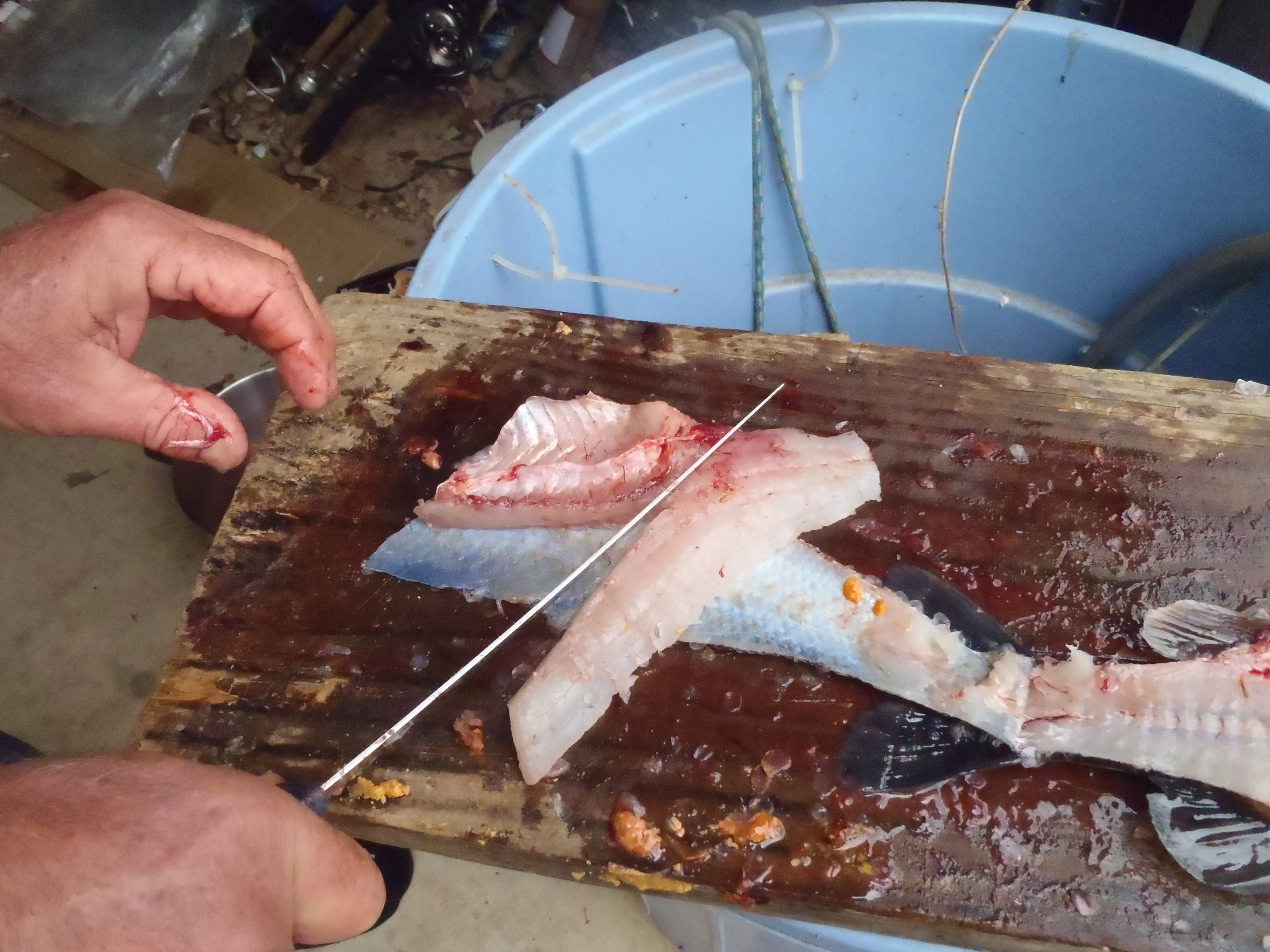 Cut out the rib cage, keeping your knife at an angle to get as much meat as possible

Flip the fish over and repeat the process

When done right, there is almost no meat left on the backbone. I throw it away unless I am making fish chowder. If I plan to make my Mahatten style chowder I cut the backbone at the head and tail and save it with the rib cages. 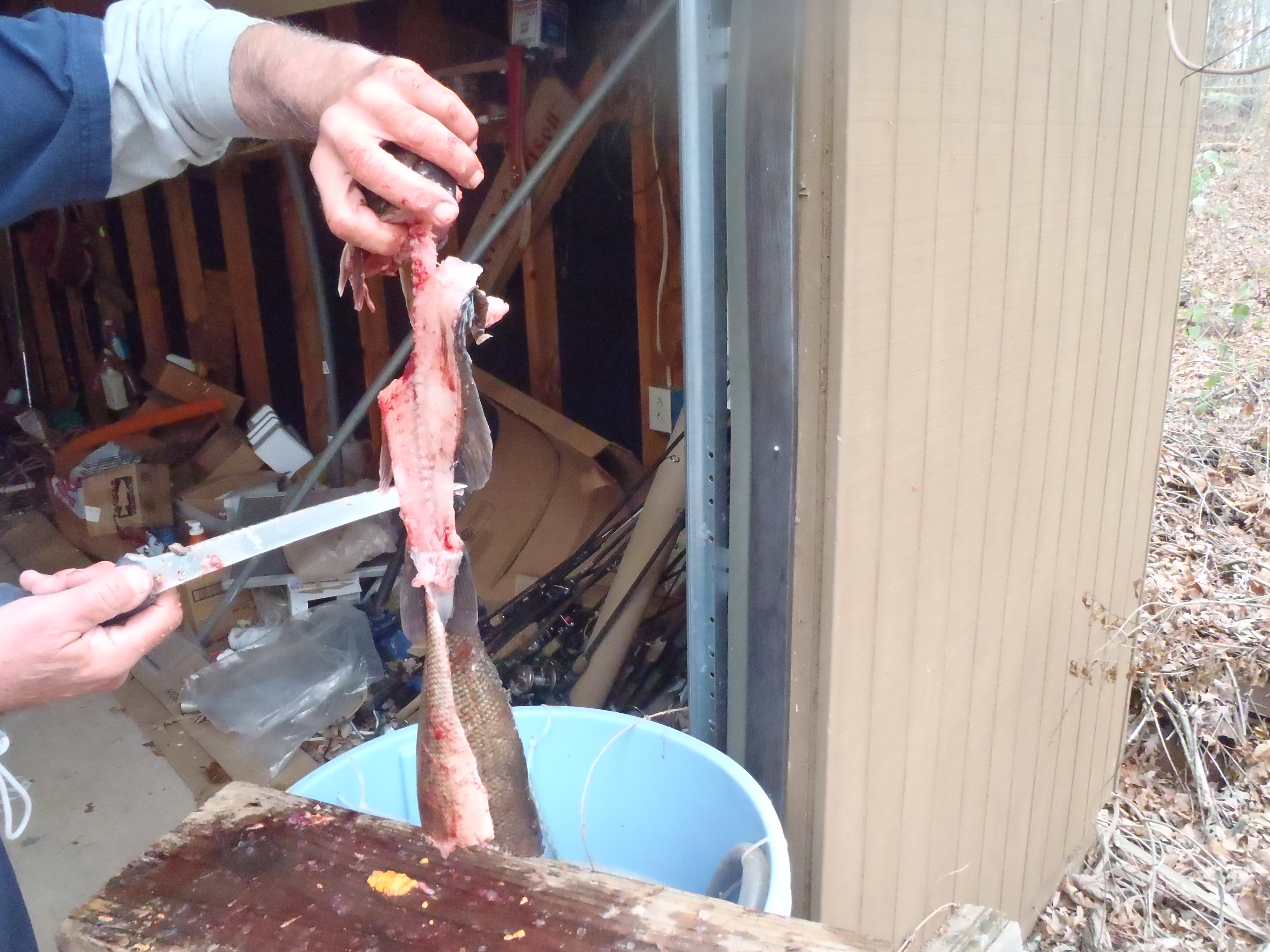 When done right very little meat is left on the bones

Wash the filets getting all blood off. Feel along the edges, especially along the top where the dorsal fin was attached, to make sure there are no small bones left.

This may sound complicated, but with a little practice it is quick and efficient. I can filet a bass, from first cut to finish, in less than two minutes, and have a bowl of delicious boneless, skinlessw filets. 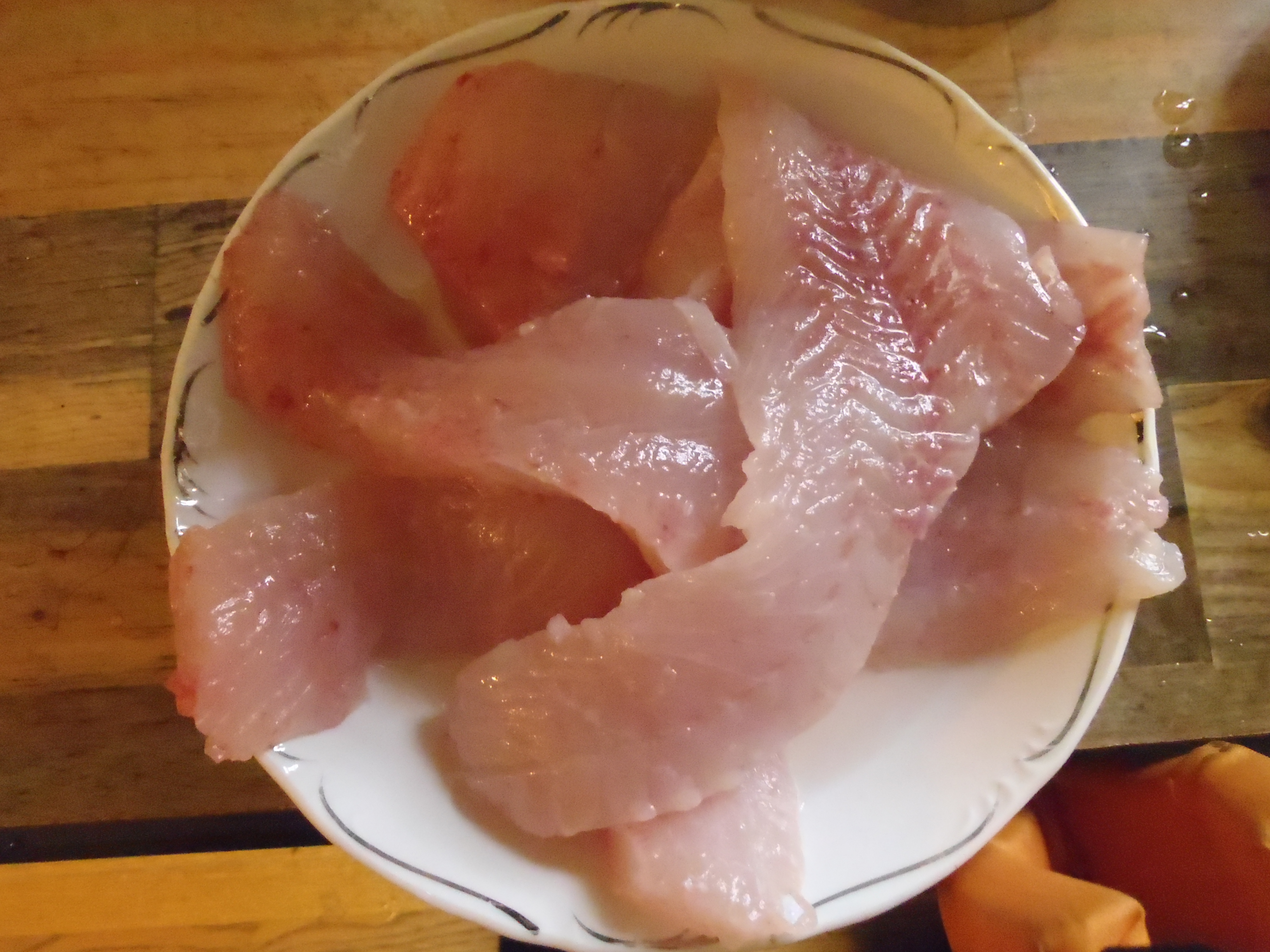