Bass On The Long Rod – Catching Bass On A Fly Rod 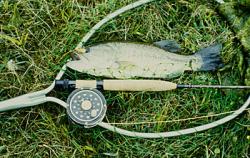 This largemouth was caught on an Eelworm Streamer, which is the fly-fisher’s alternative to a rubber worm.

Think of fly-fishing and you automatically think of trout. Fly-fishing is ideally suited to presenting tiny flies that imitate a lot of what a trout eats. But fly-fishing can be a challenging technique for targeting bass, too. And most of us have a pond or lake close by that has bass in it so they’re readily available and we don’t have to travel far to find good fishing.

Most anglers pursue bass with a spinning rod or bait-casting gear from the deck of a bass boat like the anglers they see on Saturday mornings. But there are more and more anglers trying the long rod for bass and they’re finding it both challenging and rewarding. With fly gear, you’re certainly not going to hoist a 5-pound bass into the boat and you’re going to have to fight it more than 30 seconds. An extended fight alone might be the real attraction. 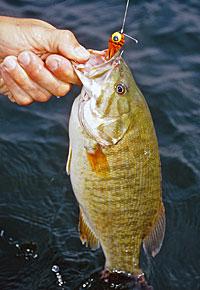 The explosion in fly tying materials in recent years has fostered even more realistic flies, many intended for bass.

The real interest in fly-fishing for bass got started in the 1980’s jumpstarted by two legends in the fishing world. Oklahoman Dave Whitlock was one of the first to design flies specifically for warm-water species and extolled the joys of fly-fishing for bass. Whitlock was a master fly tier, artist, author and fly-fishing innovator who eventually transplanted to Arkansas to be close to the White River and its fabulous trout fishing, but he never forgot about bass.

Whitlock’s innovative designs included the Eelworm Streamer, which was the fly rodder’s equivalent to the bass fisherman’s plastic worm. With heavy lead dumbbell eyes, the fly exhibited a nose-down attitude that mimicked the classic rubber worm, but with undulating feathers and mottled tones the Eelworm Streamer looked more life-like than any piece of plastic.

Whitlock continued to create bass flies that covered everything from top to bottom. Flies like the Hare Water Pup, Wiggle-Legs Frog, Dragon Flies and Sheep Minnows that look more real than any crankbait. Bass are more opportunistic than trout. Most times there’s no need to match-the-hatch when fly fishing for bass, but Whitlock’s designs opened the eyes of fly fishers who had their sights set on bass and had come from a trout fishing background. Although many of Whitlock’s flies appealed to both largemouth and smallmouth bass, his flies had a particular bucketmouth appeal. 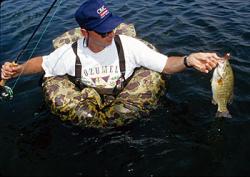 Kicking around in a float tube is a great way to target bass with a fly rod.

Larry Dahlberg grew up fishing and guiding on the St. Croix River on the Minnesota/Wisconsin border. Dahlberg was so infatuated with fishing that by the time his friends were bagging groceries at the local supermarket, he was guiding anglers on the river for good money, most with a fly rod. Dahlberg, like Whitlock, was an innovator and inventor and went about designing flies that would catch his clients more fish.

One of his creations, the Dahlberg Diver, was fly-fishing’s answer to the bass fishermen’s crankbait. The Dahlberg Diver has a cone-shaped head made of spun deer hair with a stiff collar. The idea was that when stripped hard, the cone-shaped head would act like a lip on a crankbait causing the fly to dive. The harder and more you stripped, the deeper the fly would dive. Stop stripping and the fly would swim back to the surface. It’s a triggering mechanism that most predators can’t stand. The Dahlberg Diver proved to be a killer on not only St. Croix River smallmouths, but also sizable pike and muskies. Dahlberg also tied life-like poppers and sliders that catch plenty of bass even today.

The explosion in fly tying materials in recent years has fostered even more realistic flies, many intended for bass. With a variety of synthetic furs, rabbit strips, Krystal Flash and rubber legs, pinchers and feelers, bass flies look like the real thing. Made from natural materials or synthetics, bass flies not only look real, they feel natural. When a bass chomps on a hair mouse or frog, it feels natural so that fish is less likely to let go. Undulating feathers or quivering rubber legs gives bass flies an added realism that cannot be duplicated with conventional hard baits. 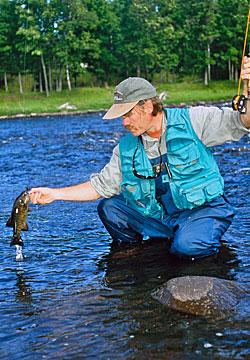 Many rivers have outstanding smallmouth populations and targeting them in the summer with the long rod can be great fun.

What kind of fly rod you choose for bass fishing depends on which kind of bass you intend to fish for. Largemouths tend to inhabit thick cover where a heavier rod can be an advantage for muscling big bass. The flies that are used to entice largemouth bass are generally larger and bulkier and more easily cast with an 8- or 9-weight fly rod. Smallmouths frequent more open structure where rocks or wood are the main habitat. Nymphs, streamers and bugs that trigger strikes from smallmouths can be easily cast with a 6-weight fly rod. The reel is relatively unimportant and is used mainly for line storage. Bass don’t run so an intricate drag system is not necessary.

Unlike when casting a lure with a spinning or bait-casting rod, when fly-fishing the line carries the lure or fly not the other way around. To throw bulky, wind-resistant frogs or poppers requires a weight-forward or bass-bug tapered line. A line like this is heavier at the forward end and is better suited to driving out-sized bugs that require more power to cast. Match the line weight to the rod. Leaders need to be nothing more than a four-foot length of 20-pound fluorocarbon when fishing largemouths. A tapered leader of no more the 7-1/2 feet is perfect for smallmouths.

Late spring and summer is primetime for fly-fishing for bass. Bass are most susceptible to fly-rod tactics when they are in the shallows. Actively spawning bass are suckers for flies twitched around beds. I’ve caught dozens of largemouths and smallmouths on rubber spiders intended for bluegills. A good pair of polarized glasses will help you spot active beds and spawning bass. This can be done from the front deck of a bass boat or out of a float tube.

Fly-rodding for bass is hot during the heat of summer. Bass take up residence in predictable locations during the summer and fly fishers can capitalize. Working minnow imitations along weed edges can be a great tactic for scoring on summer largemouths.

Use a sponge spider for bass

One of many bass the author has caught on a sponge spider intended for panfish.

Largemouths will also take up residence under mats of floating vegetation to avoid the hot sun and jet skis. Lily pads and largemouths are like peanut butter and jelly. Frogs, Divers and bugs tied with monofilament weed guards can be cast into the thickest junk without fear of getting hung up. Dropping a hair frog into the opening between pads and then causing it to twitch and skitter will bring explosive strikes from resident bass. Many times the best action is during the heat of the day.

Smallmouth thrive in cool, clear lakes and can be targeted by fly fishers with life-like imitations that simulate smallmouth fare like crayfish, minnows and gobies. In large cool bodies of water smallmouths may not spawn until July, so you’ll find them still patrolling the shallows. During the post spawn, you’ll find male bass protecting the beds. Look a little deeper for the rotund females.

Many rivers have outstanding smallmouth populations and targeting them in the summer with the long rod can be great fun. As water levels drop in the summer time bass will be highly concentrated on the pools and deeper runs. Bass will move into riffles to feed or in slack-water areas to root out crayfish.

Fly-fishing for smallmouth in rivers is a lot like fly-fishing for trout. Many of the same nymphs, Wooly Buggers, Muddler Minnows that catch trout will catch smallies. There may even be times when hatches of aquatic insects will bring smallmouths to the surface like trout.

Streams and rivers become tepid during the summer months so wading wet is an option. You can use a canoe to cover water and then get out and fish the best pools and runs. Tangling with a 3 or 4-pound bulldogging smallie on the long rod is a hoot.