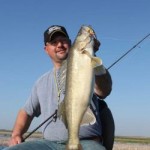 from The Fishing Wire
by Daniel Quade

Trolling, rigging and jigging are great ways to put walleyes in the boat, but when conditions are right, casting shad-bodied crankbaits to shallow structure knows no equal for racking up big numbers of early summer ‘eyes.

North Dakota guide Jason Feldner likes shallow running crankbaits for walleyes from early spring through the month of June.
Just ask Jason Feldner, proprietor of Perch-Eyes Guide Service. A veteran guide who earns his keep connecting clients with walleyes on North Dakota’s 160,000-acre Devils Lake, he casts cranks to fish-rich banks from the first warm fronts of spring throughout the month of June.

And the good news is, even though the sprawling High Plains paradise Feldner calls home is a bit unique, the tactics he employs here work wonders on a variety of other walleye waters as well.

On Devils Lake, rising water levels have in recent years created an almost endless supply of such environments. While few fisheries offer exactly the same opportunities, you can in most systems find concentrations of shallow fish feeding somewhere. Potential hotspots include necked-down current areas, emerging weedbeds and shoreline riprap.

As the water continues warming, Feldner factors the wind into his fishing locations.

“Once the water temp hits the 60s, I look for windswept areas where wave action stirs up the shallows, concentrating forage and reducing light penetration,” he says. Opportunistic ‘eyes quickly move in to scarf up shrimp and minnows, but a sustained wind lasting several days or more can really fire up a shoreline.

When planning his daily structural hit list, he always keeps yesterday’s weather in mind. A lot of times he gets a strong wind one day, then dead calm the next. The downwind bank is good when the wind is blowing, but even after it dies down, the shoreline that got pounded the day before stills hold fish.

Certain structure is central to both temperature-related and wind-driven scenarios.

“I prefer slow-tapering shorelines over banks with steep breaks,” he says. “Not necessarily because they hold more fish, but because my bait stays in the strike zone longer on a gradual slope.”

In the early season, soft muck bottoms absorb sunlight and help boost the water temperature. But later, shorelines exposed to the prevailing winds are typically dominated by gravel and rocks. Flooded woody cover-in the form of trees and brush-is also a common occurrence on Devils Lake, as it is on manmade reservoirs and flowages across the Walleye Belt. Feldner frequently plays the timber card, too, targeting walleyes in and around the shallow treeline.

“During the early season, I cruise the bank, targeting fallen trees,” he says, explaining that walleyes often tuck tight to such timber, lurking in the shade as they await passing prey. “You won’t catch a bunch of fish in one area, but you’ll get one here and one there, so it’s important to cover water and keep moving.”

Shad-bodied crankbaits are another pillar of the program. Like walleyes in most waters, Devils Lake fish eat a variety of forage, from shrimp to juvenile yellow perch and white bass. A crankbait’s deep, stout profile mimics a range of prey, and is easy for walleyes to home in on in low-visibility conditions, such as when wind and waves roil near-shore waters.

The Lindy Shadling and Bomber Flat A are two of Feldner’s go-to baits. Both the Shadling and Flat A are tight-wiggling, rattling baits capable of drawing the ire of nearby ‘eyes, even when visibility is reduced. Another key attribute-their near-buoyancy allows them to be fished with a variety of moves, without rocketing to the surface on the pause. Such versatility is critical, because Feldner’s presentations run the gamut-from a steady pull to ultra-animated retrieve-depending on the mood of the fish.

With his boat hovering in eight feet of water, Feldner makes a long cast close to shore, then works the bait along bottom back to the boat.

“Start with the rodtip high, then lower it during the retrieve, so the bait dives deeper and stays close to bottom,” he notes.

Given walleyes’ notoriously fickle nature, experimentation is key to finding the best retrieve for the situation at hand. Every day is a little different. Sometimes they want it slow and steady, other times you have to get aggressive and really pound bottom or burn it along to trigger reaction strikes.

The shallow crank-casting pattern shines through early summer, until water temperatures reach the 70-degree mark. After that, Feldner typically focuses his efforts a bit deeper, often pulling deep-diving cranks or spinner rigs along outside weed edges and deep treelines. But even then, the shallow pattern is always an option, should the right wind come up along a slow-tapering shore.