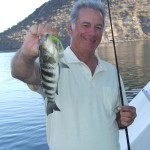 I caught this sea bass after a week of no fishing – big smile that I got to fish again!

Whats going on with the weather this year? Every spring it seems we have cold then hot then cold weather again without much in between. Bass and bream don’t know when to bed. Water temperatures go up then back down, then jump up again. Tornadoes ravage the country. Is this a new pattern, global climate change?

Here’s what Newsweek magazine has to say: “There are ominous signs that the Earth’s weather patterns have begun to change dramatically and that these changes may portend a drastic decline in food production…The evidence in support of these predictions has now begun to accumulate so massively that meteorologists are hard-pressed to keep up with it…. Last April, in the most devastating outbreak of tornadoes ever recorded, 148 twisters killed more than 300 people and caused half a billion dollars’ worth of damage in 13 U.S. states.”

Will we ever have “normal” weather again? Or is global climate change, which used to be called “global warming,” our fate. According to Newsweek it is, or was. Those quotes are from an article in the April 28, 1975 issue. Over 38 years ago. Then the great fear was global cooling. What goes around comes around.

Weather and climates change. Excuse me if I don’t go along with those scientists and politicians spending billions of dollars of other peoples’ money, your money and my money, on a problem they predict.

I think I will just go fishing, no matter what the weather.