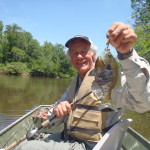 Rivers have always fascinated me. I grew up riding my bicycle to local farm ponds and creeks to fish, but the nearest river was over 30 miles away – way to far for my means of transportation. Maybe the lack of experience on rivers makes me want to be on them more.

The Flint River starts just south of the Atlanta Airport, flows about 20 miles from Griffin through Pike County, winds it way through the piedmont and Lake Blackshear to join with the Chattahoochee River in Lake Seminole. It is a beautiful river with natural surroundings for most of its length.

When I moved to Griffin in 1972 Jim Berry and Emmett Piland introduced me to wading the shoals to catch shoal bass. Shoal bass are a black bass species found mostly in the Flint and its tributaries, although it has been “stocked” by fishermen in places like the Ocmulgee River below the Jackson Lake dam.

I loved wading the shoals and catching fish. I sat down very hard on a lot of slick rocks and learned to carry a knife on my belt to reach in a hurry. Often we got caught in the current and would drift through deep pools until we could get our feet on the ground again. Problem was, trotlines crossed many of those holes and if you got caught in one you had better be able to cut yourself free in a hurry.

We caught a lot of shoalies on small crankbaits and Texas rigged worms. I learned to fish the eddies behind rocks and at the head and tail of the deeper pools. I also found out about “rockworms,” the dragonfly nymphs that lived in the moss on river rocks. Shoal bass love them and they are a great bait, if you don’t get your fingers pinched.

Last weekend the Georgia Outdoor Writers Association held our spring conference in Albany and we got several chances to fish the Flint River near there. I had fished the lower Flint a couple of times, once for a GON article with a local guide in Albany and again last summer when Niles Murray took me on a float trip starting at the Lake Blackshear dam.

Both trips were fun and we caught a lot of shoal bass. The guide showed me how well they hit topwater baits late in the afternoon. He landed a five pounder and I got one that weighed about 3.5 pounds. His hit a popper and mine hit a buzz bait. Topwater strikes make for exciting fishing.

At the conference I got to fish with fellow member Vic O. Miller, a local writer that knows the river well and loves it. But he has quite a reputation for turning over boats in the Flint so I was a little worried. He met me at the boat landing in his jon boat to go fishing.

The first thing I did after putting down my rods and tackle was to put on the life jacket he left out for me. Then he told me it didn’t float! But I still wore it all day.

We followed a pontoon boat about 45 minutes up the river. A guide there has a great set-up. The pontoon had racks on its sides for canoes and pulled his drift boat. After stopping on a sandbar the canoes were launched and two members got in each, with two more in the drift boat. They would fish back downstream with the current to the landing.

Vic and I ran on up the river for a few miles so we could fish unused water and started our drift back downstream. At one “blue hole,” a place where springs enter the river through the bedrock, we saw something chasing baitfish but we could not get them to hit.

I had carried three of my bass rods and tried a variety of baits without a hit. Vic fishes with a fly rod only and he was catching bluegill and long ear sunfish regularly. He wanted to keep some to filet for dinner and was catching a good many big enough to keep. After a couple of hours of him catching bream and me not getting any bites, I gave up and tied on a Mepps Spinner.

The bream seemed to like it and I caught a dozen or so, and the bigger ones hit the spinner. And, as luck would have it, I caught two small largemouth on it. We got him a good mess of bream before getting back to the landing and talking to the others on the trip.

The river was high and the shoal bass were not feeding. The two members with the guide fished with fly rods and caught a lot of bream and two shoal bass. One other member caught a couple of bass, one a nice shoalie, but that was it for bass. It was a great trip anyway.

Fish the Flint River if you get a chance. No matter what part you fish it is beautiful and you can catch fish. If the bass won’t bite, go for bream like we did!