Technique is highly effective, but impact on other species not fully known 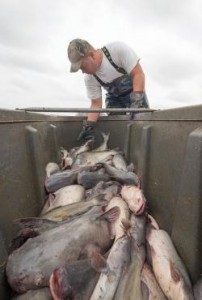 Brent Murphy, the mate aboard Rocky Rice’s boat, checks the tankful of blue catfish he and Rice caught in fish pots in the Potomac River. Some fishermen, including Rice, are interested in the potential for electrofishing to increase their harvests. (Dave Harp)

For years, George Trice watched as blue catfish numbers on the James River grew, while his blue crab catches dwindled.

The James is filled with huge numbers of catfish that are “eating the whole river up” including the crabs, the Poquoson-based waterman said.

So Trice, as he puts it, is working to get even. He does that by sticking two electrodes into the river and sending a low-frequency electric jolt through the water.

All around, stunned blue catfish pop to the surface, and Trice and his crew dip them out of the water in almost unfathomable numbers. His catches can routinely hit 6,000 pounds a day.

“The only limiting factor is what the truck will carry away,” Trice said.

Last year, he caught 170,000 pounds of blue catfish, and he expected to more than double that to 400,000 pounds by the time he pulls his electrodes out of the water in early October.

Electrofishing isn’t a normal method of commercial harvest, but Trice has a research permit from the Virginia Marine Resources Commission and is working with scientists from the Virginia Commonwealth University and the Virginia Institute of Marine Science to determine the potential of the technique to help control the rampant population of nonnative blue catfish. A grant from Virginia Sea Grant helped him purchase the equipment.

But the unconventional fishing technique has drawn the ire of some recreational anglers on the river, who prize large blue catfish. And while the VMRC has allowed him use the gear in tidal waters, where it licenses commercial fishing, another state agency is worried about the practice.

Biologists with the Department of Game and Inland Fisheries say electrofishing may have unforeseen consequences for other species in the river. While the VMRC licenses the gear, the DGIF sets catch limits for blue catfish. Right now, though, the only limit is one blue catfish larger than 32 pounds a day.

Most of the fish Trice — and other commercial fishermen — catch are small, weighing only a few pounds, so there is no limit. And there’s ample demand. “There’s people competing over them,” Trice said. “The market is definitely there.”

But DGIF staff, worried about potential consequences, are preparing a recommendation that opposes the use of electrofishing for blue catfish harvests, said Bob Greenlee, a DGIF fisheries biologist who has been working with blue catfish for years.

Greenlee said that outside a couple of counties in North Carolina, “there is no where else that I know of where electrofishing is allowed to used by anyone other than fisheries professionals.”

Biologists have long used high-frequency electrofishing, which essentially stuns everything in the water — and can be dangerous to people — to conduct fish surveys in rivers and streams.

But catfish can be stunned with less-intense, low-frequency electrofishing, which provides a mild jolt barely felt by humans. Biologists have used the technique for years to work with catfish.

When Trice shocks a section of the river, all that pops up in the surrounding water are catfish — primarily blue catfish but also flathead and white catfish. Two-man crews in two chase boats quickly go to work with dip nets to scoop fish out of the water. After about two minutes, the fish recover and begin to swim away.

Because only catfish come to the surface, the crews can selectively dip only blue catfish out of the water.

“It is a really clean fishery,” Trice said. “I have commercially fished since I graduated in ’90, and this is the best way I see to do it. You don’t have any bycatch. You don’t kill anything you don’t want.”

But there are limitations to the equipment. It can only be used in low-salinity water. Much of the lower James River — and the blue catfish living there — are off-limits to Trice. Also, water temperatures have to at least be in the low 70s for it to work, so his fishing season is limited to about four months.

But multiple fisherman may not be able to use the electrofishing gear in the same river. Trice said the fish begin to get tolerant if he shocks the same area more than once, so he has to keep moving from place to place, typically revisiting an area only after a couple of weeks. Sometimes he takes a break from the James altogether and uses the gear on the Pamunkey River.

“It is not going to be the only way to harvest blue catfish because of those limitations, but it is incredibly efficient,” said Greg Garman, director of the Virginia Commonwealth University Center for Environmental Studies, and one of the scientists involved with the project. “We think there is a huge potential here.”

Garman said electrofishing might be especially useful in smaller rivers with ecologically important species that biologists want to protect. It would be too expensive to pay biologists to try to control blue catfish populations in those places, he said, but it might make sense to let commercial fishermen do the job — and make some money.

“It’s not going to solve all of the problems out there overnight, but it could be part of the solution to a couple of problems,” Garman said.

Greenlee, though, said it’s not clear that electrofishing itself isn’t causing a problem, or that only catfish are affected. During thier own work, he said, DGIF biologists have observed other species affected by low frequence electrofishing, including longnose gar, common carp and gizzard shad.

Even if it did not harm a sturgeon directly, he said, it could have other impacts, such as causing them to abandon a spawning run.

Garman said he is skeptical that the electrofishing is having a signficant impact on other species, but said research should continue. “I hope the agencies can wait long enough so they can make decision based on good fisheries science,” he said.

Laurie Naismith, spokeswoman for the VMRC, said the commission would also like to see the electrofishing research continue. “We are eager to see what the research shows about using this methodology, because something has got to be done,” she said. “We have to somehow get control of the blue catfish population.”

Greenlee said his department does support a commercial blue catfish harvest — just not one that uses electrofishing. In fact, he said ramped-up fishing could actually be beneficial.

The James River only a few years ago was a hot spot for trophy blue catfish, some of which reached 100 pounds. But the river has become so overwhelmed with catfish that it has exceeded it carrying capacity and large fish have become scarce.

Instead of producing large trophy fish, it is increasingly filled with slow-growing small catfish, all competing for a limited food supply, rather than the large trophy size fish prized by many recreational anglers.

“If we can harvest enough small fish and get them out of there, there is that potential for the trophy fishery to sustain itself at a higher level,” Greenlee said.