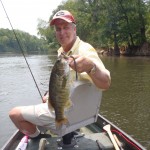 In last Sunday’s comic strip “The Lockhorns,” the wife and husband are getting out of a boat with fishing equipment in their hands. He has a very disgusted look on his face and his wife says “The fish weren’t dumb enough to go for that lure … but you were.” I know how he feels!

I have said many times that fishing lures are made to catch fishermen, not fish. Walk into Berrys Sporting Goods and there is a bewildering array of plugs, spinnerbaits and worms in any color you can imagine, in many shapes and sizes. And I have a couple of most of them in my boat.

Any lure will catch a fish. But does a fisherman really need all those different combinations? And why is a lime green plug better on any given day than a chartreuse one? It probably isn’t. But us fishermen keep hoping for some magic lure that will make us catch fish, no matter how or where we use it.

Professional fishermen hype their favorite lures and colors constantly, and many have plug series and colors named for them. They have a vested interest in those lures selling. After all, the companies making them pay the pros a good salary or stipend. And every lure company is competing with others for the fisherman’s dollar.

Don’t get me wrong. I have my favorites. And I keep trying new stuff that seems to come out every week. Some day that magic lure or worm color may be invented, but I doubt it. The place you use a lure and how you fish it is much more important than other factors.

Other members of the bass clubs make fun of me since I normally have about 20 rods and reels on the deck of my boat, all rigged with different lures. It is much easier to pick up a different rod to try a different lure than to cut the one you are using off and tie on another one. That is, it is easier and quicker if you don’t have to untangle six rods to get to the one you want.

I could probably have four rods and reels out to use in a tournament since I seldom fish more than four or five baits during a tournament. But I want to be ready just in case. In the last tournament I fished I used a spinner bait most of the day. I also fished a buzz bait, topwater popper, jig head worm and crankbait. But I had at least 15 more outfits ready just in case I wanted to try something else.

A jig head worm, or shaky head, is pretty much my “goto” bait when fishing is tough. And I use one color of worm 90 percent of the time, switching to a different color only in real clear water. But I have over 100 bags of worms in different colors in my boat. Some day I may find one of those weird colors, like Tequila Sunrise, is just what the fish want.

Bass eat a lot of kinds of food, but most are basic, subdued colors. I have never seen a bright red shad but I have bright red shad plugs. No orange worms exist in our lakes but I have bags of worms ranging from a dull, drab orange to bright, fluorescent orange. Sometimes when fishing a floating worm it helps me to see the bait if it is a bright color, and the bass will eat it, but why do they eat it? They don’t seem to care about the color at all.

I often hear after a tournament that the bass would hit only a purple worm with a pink tail and gold flakes, or some such combination. But then you can talk with other fishermen that caught just as many, or even more, fish on a completely different color. And as often as not I have been fishing the purple pink gold worm all day without a bite on it!

In any big tournament the pros do well with a wide variety of baits fished in a lot of different ways. I fished at Hartwell on Wednesday with a fisherman that had won a tournament on Clark’s Hill the previous Sunday. He and his partner had five bass weighing 22.99 pounds and had big fish with a 7.8 pounder. He told me they caught them on a small crankbait and a white jerk bait.

On Thursday I was at my boat club on Clark’s Hill and talked to a bass fishermen while we took our boats out. He said he was having a tough time catching bass but he heard about a tournament won on Sunday. The two guys were using a big crankbait and a chartreuse jerk bait and had 28 pounds, with a 7.8 pounder for big fish. After a little discussion we realized we were talking about the same tournament, but the weight had gotten heavier with the retelling.

Funny thing, he had been using a big crankbait and chartreuse jerk bait all day without a bite. But he was fishing way up Little River where the water was stained while the tournament was won further down the lake in much clearer water. But he thought the winning fishermen had discovered what the bass wanted so he fished it all day. It was a little funny that he had heard almost the right info about the baits but was convinced enough to use those baits, even if they were the wrong ones.

Us fishermen are crazy. So when you go to the store, be sure to pick up some of the newest, hottest lures and colors. The manufacturers and retailers will appreciate it. And the fish may even hit it!