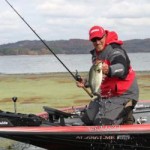 Jimmy Mason and bass caught in mats of grass

By Steven Johnson
From The Fishing Wire

Alabama guide Jimmy Mason is an expert at punch-bait fishing on the vast grass mats of the TVA lakes.

Two bass fishing tactics are commonly used to pull big bass from massive grass mats: Throwing a hollow body frog for those fish willing to smash through the “roof,” and punching through the grass for those holding below. If bass aren’t hitting the top, the choice is already made. Put up your dukes and start punchin’.

Endless grass mats make it seem like B.A.S.S. Elite pro Terry Scroggins is searching for a needle in haystack. With each pitch, Scroggins’ big weight hits the dense mat, punches a hole and pulls his Big Show Craw down beneath the grass. He lifts the bait a time or two to see if anyone is home, pulls the bait back out of the same hole and then pitches to another spot. The approach appears random, but Scroggins is highly intentional about his lure choice, the spots where he flips it and each presentation.

A Florida-groomed pro with five B.A.S.S. wins and more than $1.5 million in career earnings, Terry “Big Show” Scroggins understands the idiosyncrasies of matted grass. He knows that bass live under those mats and that the best way to get them out often is to flip a heavily weighted bait so that it punches through the cover.

Punching is a prime technique anywhere vegetation stays matted on top, and is normally most effective on sunny days when bass seek the shade of a roof overhead. During the cool season, Mason thinks punching first on post-front, bluebird-sky days because the sun heats the mat, and the water beneath the vegetation tends to be just a bit warmer.

Elite pro Terry Scroggins learned punchin’ in his home Florida waters but now uses it where ever he finds thick floating weeds.
Grass mats often are thick on top but more open under the roof, and that influences lure selection. For the easiest descent through the mats, lures should be slender without big appendages that can grab the grass and stop its descent.

Likely forage under a mat is a critical factor for Scoggins when he’s trying to decide which bait to punch. In Florida, crawfish abound beneath many mats, so his bait of choice often is his namesake Big Show Craw. Where bluegills are the main forage he’s more likely to use a YUM 2ube or Vibra King Tube. A compact creature-type soft plastic like the Wooly Bug is a blend of the two styles, and he often tries it first when he’s not certain of the preferred forage.

The size of the bass present also influences lure choice. When Mason is targeting heavyweight bass he prefers the Vibra King Tube.

“I don’t know exactly what it is about that Vibra King Tube,” he said, “but it attracts big fish.”

Other requirements for punching bass in the face include a heavy sinker (1 ½-ounce, often pegged), strong straight-shank or offset worm hooks, heavy action flippin’ rods and 60- to 80-pound braided line.

Finding bass in grass mats is a lot like locating them in other cover, look for something different.

The Big Show Craw, designed by Terry Scroggins, is one of the favorites for punch-bait fishing when heavily weighted.
“Look at the grass mat just like you’d look at a shoreline,” Scroggins said. “Look for the little points and pockets, greener spots, mixes of grass types and other cover poking through. Anything that’s different can hold fish.”

Not all distinctions are visible from above the surface, but topo maps or GPS mapping and graphs reveal bottom breaklines, ditches, points and other features that may hold fish. Mason typically approaches mats of grass methodically, beginning along outside edges and then moving to scattered mats and eventually into the thickest stuff. He watches and listens continually for movement beneath the mats that suggests feeding fish and pays careful attention to every detail every time a fish strikes.

Because mats commonly cover extensive areas, it’s critical to refine the pattern as a day progresses. Move quickly and make a lot of punches at a variety of locations until a fish hits, then slow down. Bass commonly congregate under mats, so an area that yields one bass often holds more. When one strikes, make your next pitch to that exact spot.

Mason says that a lot of his clients who are unfamiliar with punching mats miss fish all day long the first time. Detecting strikes can be tough.

“First, make sure your bait goes all the way through the mat,” he said. “When it does, let it fall to the bottom. Pay attention because aggressive fish might grab it before gets to the bottom.”

Once the bait finds bottom, both anglers advise experimenting to determine where the fish are holding in the water column. Mason hops the lure a time or two, then lifts it almost to the surface and smacks it against the top of the mat a few times before dropping it again.

“They might be on the bottom,” he said, “but they also might be barely under that mat. When that’s the case, smacking the mat with the bait triggers strikes.”