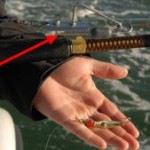 Use a planer board to get a small bait down deep

Get Down With Planers

Trolling Deep Made Easy
From The Fishing Wire

On a recent trip to North Carolina, Yamaha caught up with the charter captain brothers Brant and Barrett McMullan, highly-ranked professional kingfish tournament anglers and Yamaha Pro Team members. The McMullan family owns and operates the Ocean Isle Fishing Center in Ocean Isle Beach, home to the Jolly Mon King Mackerel Tournament. The initial plan was to run offshore to fish for tuna and wahoo, but Mother Nature was not cooperating so the brothers took the heavy tackle off their Yamaha-powered 32′ Yellowfin center console and replaced it with some light gear to fish for Spanish mackerel, bonito and gray trout inshore.

During the switch, we noticed the McMullan’s had heavy outfits with large planers coming off the boat and light outfits equipped with little tiny planers going on. So we asked them, “Why do you guys always seem to have planers on the boat?”

“It doesn’t matter what kind of fishing we are doing, or whether it’s inshore or offshore,” said Capt. Brant. “You can be sure that there are a lot more fish holding down in the water column than there are feeding on the surface. Trolling planers are the easiest way I know to get a lure or rigged bait down there to catch those fish.”

For those unfamiliar with trolling planers, they are basically weighted, stainless steel wings with a ring and wire trip mechanism. When armed, the forward motion of the boat forces the planer to dive to a predetermined depth pulling whatever lure or bait is attached along with it. As demonstrated by the McMullan’s, trolling planers come in a wide variety of sizes for covering almost any trolling situation.

“We use the smallest planers (#1 and #2) for fish like Spanish mackerel and bonito inshore, and the larger sizes (#16 and above) offshore for fish like tuna and wahoo,” Capt. Brant explained. “In recent years, the hot setup for catching big bluefin tuna around here in the winter has been using the large planers to troll rigged ballyhoo 50-to-60 feet down and about a hundred yards behind the boat. With all the different sizes available, you can find a planer that will work in almost any fishing situation.”

Planers can be used a couple of different ways depending on the size and application. The small ones are attached directly to the end of the running line on a light trolling outfit. Then a long leader is run between the planer and the lure. That day, the McMullan’s used #1 planers on light trolling outfits with a 12-foot leader running back to a tiny Clark spoon that matched the size of the baitfish the Spanish mackerel were chasing. It would be impossible to get those nearly weightless spoons down at trolling speed any other way.

The planers pulled them along at 15-to-20 feet below the surface. When a fish strikes and gets hooked, the pressure trips the ring mechanism, which allows the wing to change from a diving angle to a flat position (see figure 2) This allows the angler to play the fish back to the boat.
Once the planer is reeled to the rod tip, simply pull the fish in by hand using the leader.

“Larger planers are rigged differently,” McMullan told us. “At speed, they create so much resistance that you would have to attach them to an extremely heavy outfit just to handle the pressure. When you hooked a fish, the outfit would be so heavy you would have to fight the fish with the rod still in the rod holder, and that’s not much fun. So we attach the big planers to the line from a downrigger, and the lures or baits are fished from a separate outfit using a simple release system made up of a double snap swivel and a rubber band to link it to the planer line.”

The downrigger is loaded with 250-lb. test braided line to handle the pressure the planer generates as it digs to run deep. It is attached to the downrigger line with a 400-lb. test snap swivel replacing the downrigger ball that would normally be there. When it’s time to deploy the planer, the boat should be in gear and at trolling speed. Drop the planer in the water armed so it will dive, and lower it under pressure from the drag on the downrigger to its maximum depth, then lock it up. Next grab the outfit you’re going to fish with and release the lure or rigged bait as far back behind the boat as you want it. For some gamefish like wahoo, running it 20 or 30 feet behind the planer is fine. The planer is shiny stainless steel and can actually help attract some fish to the hook bait. For others species that tend to shy away from boats, like bluefin tuna, you will want to get the bait way back behind the boat, 50-to-100 yards or more.

To link the bait line to the downrigger line so the planer can pull it down, wrap a #64 rubber band around the line (see figure 3) and attach it to one side of a double snap swivel. The other snap is closed around the braided line between the downrigger and the planer. With your thumb on the spool of the reel, slowly let line out. The pressure of the water at trolling speed will push the swivel release down the line to the top of the planer along with the line running to the bait behind the boat. Once it reaches the planer, tighten up the line a little to take as much belly out of the length between the rod tip and the rubber band release as possible. When a fish hits, the rubber band breaks releasing the line from its connection to the planer, and you can fight the fish free and clear.

If you don’t have downriggers, you can make a simple planer line that will accomplish the same goal. Use a 75-foot length of 200-lb. test monofilament line and crimp on a 400-lb. test swivel to the end you will use to attach to the planer. Tie a large loop that will fit over the stern clean of the boat to the other end. Clip it to the planer and let it out by hand. (see figure 4)
Figure 4. These skilled North Carolina captains never leave the docks without planers in a number of sizes on board.
Once the planer is at running depth, use the same rubber band release procedure as Capt. Brant described for the downrigger and you’ll be fishing deep for cheap! When you want to retrieve the planer, slow the boat to a stop and pull it up or pull the line hard and release it quickly to trip the mechanism.

If you’re going to be in the coastal area of North Carolina be sure to check out the McMullan’s new cable television show – OIFC No Limits Fishing, which will be broadcast daily on ATNC Cable’s local access channel with support from Yamaha Marine, Yellowfin® Boats and Pelagic® clothing. It will feature Captains Brant and Barrett providing fishing reports and forecasts, phone interviews with local captains, and an action segment with on-the-water tips and techniques to help you catch more fish. You can also access the show by going to www.oifc.com and clicking the link.