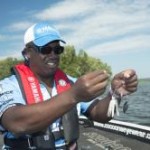 A spinnerbait is one of Is Monroe’s confidence baits 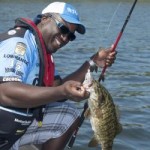 Ish Monroe caught this smallmouith on a confidence bait

Yamaha pro Ish Monroe chases bass all over the nation, and has evolved a fish-finding strategy that earns him tournament money nearly every where he goes.

Few anglers anywhere face the problem of locating bass on new lakes more often than Yamaha Pro Ish Monroe, who competes on both the Bassmaster® Elite and FLW® tours, as well as in any other events he can fit into his schedule. He doesn’t often have time for pre-tournament practice nor does he research each lake, but rather, he relies on his four ‘confidence lures.’

“At every lake I fish, I tie on a topwater frog, a square-bill crankbait, a spinnerbait, and a plastic creature bait on a flippin’ rod,” he explains, “and then I look for the places where I can use them. These are my favorite lures, and I would rather fish them than anything else.

“I have enough confidence in them so that when I find the conditions where I can use these lures I know the bass will be there. I also know through experience that somewhere on any body of water I will find the right cover and water depth where at least one of these lures will work.”

Monroe likes a spinnerbait best of all, but also relies on creature baits, frogs and square-bill crankbaits.
Of the four lures, Monroe’s favorite is the spinnerbait, either a 3/8- or 1/2-ounce model with Colorado and willow leaf blades and a white skirt. It’s a combination he’s been using nearly 30 years.

“This technique of locating bass is known as ‘fishing to your strengths’, and I certainly am not the first to use it,” continues the Yamaha Pro, “but it really does help solve the problem every fisherman has in locating bass. You always fish better and more confidently with your favorite lure or technique, and most of the time you can visually identify the water where that lure will be the most efficient.”

That’s how Monroe fished the opening event of this year’s Bassmaster® Elite Series on the Sabine River in southeast Texas. He’d never seen the water previously so he did spend three pre-tournament days looking at it. During that time he never made a single cast. He did locate the spinnerbait water he was searching for, however, some 70 miles from the launch, and he later fished it all four days of the tournament where he finished fourth.

“I really can’t stress enough how important confidence is in bass fishing,” Monroe emphasizes, “so I always tell fishermen to start every day fishing with their favorite lure. If they don’t have that confidence, they aren’t going to catch anything. What I have done personally is add three other lures I have just as much confidence in that let me expand my water selection.

Monroe says scouting until you find water where your favorite lures will be effective is key.

“The spinnerbait is the most versatile, but the square bill crankbait gives me another option for shallow brush, the frog works over thick vegetation, and with the creature bait I can penetrate any thick cover. I am essentially a shallow water fisherman, and with these lures I know I can fish any type of shallow water.”

The Yamaha Pro also points out that for him, all four of his ‘confidence lures’ are fun to fish. He is versatile and has mastered all of the various lures and presentations tournament pros use, but he doesn’t necessarily always enjoy using them.

“A bass is a bass anywhere in the world you find them,” laughs Monroe, who has not only fished for them throughout the United States but also in Spain, Japan, and several other foreign countries, “and I think we often give the fish credit for being much smarter than it really is.

“That’s why the ‘confidence lure’ system works so well. We know bass are going to be located in shallow water with cover, and we know spinnerbaits, for example, are extremely effective around shallow water cover.

“When you can look at bass fishing that way, I think the whole problem of finding bass on any lake you go to becomes a lot easier to solve.”