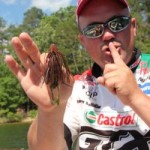 By Lawrence Taylor
from The Fishing Wire

In the summertime, if he’s not deep-cranking a Fat Free Shad BD8, he’s thinking soft plastics. Here are two of his favorite ways to fish soft plastics for hot weather bass, and two secrets he uses with those rigs to catch more, bigger bass than his competition.

If he knows bluegill and other panfish are spawning, Dudley first reaches for a 6-inch YUM Dinger and rigs it wacky, a common and effective rig for bass keyed in on the panfish activity. What’s not common is the way he retrieves the bait.

Dudley says that many anglers work a wacky-rigged worm completely wrong. They go far too slowly, giving it a couple of twitches and letting it free fall down in a more vertical-fishing style. Dudley keeps the bait moving with quick twitches of the rod so the bait moves more horizontal than vertical.

“You’ve got to keep it moving,” he said.

Dudley twitches the rod every second or less and continually collects the slack. The result is a worm that claps its two ends together and says “you…come…eat…me” to any nearby bass. He often throws the bait on spinning gear and prefers to skip it into pockets of flooded buckbrush or other cover. Preferred color patterns are the usual, with Bream and Watermelon/Red Flake getting most of the reps.

Another soft plastic he’s been throwing since it was introduced late last year is the YUM Mighty Craw. This elongated craw-imitator features a segmented body and two pairs of thin legs along the sides, and two long, maximum-action claws on the front. These long front claws are designed with extra plastic at the ends, which prompts them to “swim” with the slightest twitch of the rod or smallest breath of current.

Common Mighty Craw rigging includes the Carolina rig, Texas rig and as a trailer for jigs and bladed jigs. Dudley notched an 8-pound-plus largemouth this spring using the Mighty Craw as a trailer on a Booyah Swim’N Jig.

“I throw this rig anytime I’m around cover,” he said. “Cover can be rocks, wood, grass, docks – any type of cover.”

One key to success with the swimming jig and Mighty Craw is to select the color of the Craw depending on water clarity. If the water is clear, he suggests using greens or browns. In muddy conditions he goes with black.

If the cover he’s fishing is sparse, Dudley fishes the jig and craw quickly through the area and picks up active fish. The thicker the cover, though, the slower he works the bait.

Dudley doesn’t make many alterations or tweaks to his lures, but does make sure that the jig skirt doesn’t hang down too far and touch the arms of the Mighty Craw because it restricts the swimming action.

“Whatever gives you confidence makes you fish better,” he said, “but all I do to the jig is make sure the skirt isn’t impeding the action of the claws.”