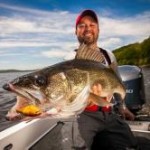 By Greg Huff
from The Fishing Wire

Goose the throttle on your next fishing trip, and you’ll be lapping other anglers as you boat walleye after walleye.

A number 5 Shad Rap is among the favorite lures for the fast troll that James Holst perfers for putting “eater” walleyes in the boat.

“This is a pattern I’ve used for many years to put numbers of eating-size fish in the boat,” says Rapala Pro-Staffer James Holst. “So make sure you try speeding up. For us, it’s just magic.”

Holst, host of In-Depth Outdoors TV on Fox Sports North, is filming a show on Lake Pepin, a wide spot on the Mississippi River south of the Twin Cities, on the Minnesota-Wisconsin border. It’s a sunny, cool late-May afternoon, and he and fellow Rapala pro-staffer Joel Nelson are loading their Skeeter MX 2025’s livewell with eater ‘eyes.

“I don’t have an answer for why these fish respond well to trolling fast, but they do,” Holst says. “We’re spending almost all of our time trolling from two and three-quarters to three miles-an-hour.”

“And we only get faster as that water temperature rises,” Holst notes.

Today, water temps are in the mid-60s. Because that’s still relatively cool for walleyes, Holst says, “the common thought would be you’re going to want to slow down.” But conventional wisdom is often wrong.

Holst trolls at up to 3 miles per hour, considered fast in the world of walleye fishing.
“You’re typically going to be able to catch a lot of fish very quickly,” Holst says.

Trophy fish are less frequent with this pattern, “but don’t be surprised if it’s a 25-, 26-inch walleye,” Holst tells Nelson, whose rod is bent in half as he reels in what both anglers suspect is a big sheephead.

But it’s not. It’s a 26-inch walleye, which Holst nets for Nelson.

“Nice work, net man,” Nelson says, before admiring the fat fish and then releasing it.

“You don’t need to keep any big fish, because by the end of the day, we’re going to have all the 16-, 18-, 19-inch fish we’re going to possibly want,” Holst explains to the camera.

“Whether you’re throwing it or trolling it, this bait is as close as you’ll get to finding a sure thing in a tackle box,” he says.

Orange craw has been the best color today. That’s one of three colors Holst calls The Trinity for post-spawn ‘eyes. Perch and firetiger are the others.

“Those three colors really stand heads and tails above everything else as producers, year after year, on this particular body of water,” Holst says.

“We’ve got sticks and stumps, rocks and bumps, and all kinds of things that we’re just bashing these crankbaits into, so that braid is great because it’s very durable,” Holst explains.

And it provides solid hooksets.

“That fish grabs that crankbait, there’s not a lot of stretch in the line, and bang, that’s a really positive hookset,” Holst says.

His Sufix 832’s test strength and diameter is a “critical piece” to Holst’s speed-trolling pattern.

“I can get a lot more dive depth out of these crankbaits if I went with a two- or a three-pound diameter line, obviously, but I don’t want to do that because we’re fishing in such shallow water,” he explains. “I want to get the baits away from the boat.”

Pulling your baits too close to the boat can spook fish.

Though most walleyes caught trolling fast are 15 to 18 inches, occasionally a whopper crashes the party.
Lake Pepin is a “troller’s dream body of water” on which to speed-troll Shad Raps, Holst says, because it features few sharp breaks and a bottom composed primarily of sand and mud.

“So it’s a really easy area to troll in one direction for a long time,” he explains. “The depths don’t change a lot and it makes this body of water perfectly applicable for trolling techniques, because … the fish are going to be very spread out due to the lack of structure.”

The pattern is not specific to Lake Pepin, however, and will work throughout the Upper Midwest.

“I’ve used this on Mille Lacs Lake, Lake of the Woods, just about everywhere you go this time of the year, after the spawn when the water temperatures start to warm up,” Holst says. “You get to that mid-65-degree water temperature, and fish – walleyes particularly – are very susceptible to a No. 5 Shad Rap trolling presentation.”

The pattern will remain effective through mid-June, when water levels generally drop and pull fish off shoreline breaks. If water levels remain high, however, the bite will persist.

As water temperatures rise through June, Holst will increase his trolling speed. By the time the pattern slows, he’ll be pulling his Shad Raps at 3.5 to 3.75 miles-per-hour.

“You’re covering water so fast that it’s incredibly efficient,” Holst says. “You’re covering so much ground at that speed putting baits in front of so many fish, you’re bound to load the boat.”

“So definitely give that some consideration,” Holst concludes. “If you want practice reeling in fish, this is the bite. You’re going to be busy.”

Greg Huff is an outdoors writer and video producer based in Minneapolis, MN. He has written for and produced videos for In-Depth Outdoors, Bassmaster.com, Fishhound.com and North American Fisherman’s FishingClub.com.

2 thoughts on “Why Should I Fast Troll Shadraps for Walleye?”