Bringing Back the Lahontan Cutthroat 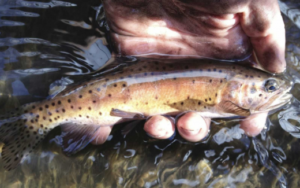 Do you know this trout?

I think it’s safe to say that rarely in my life have I been inspired performing grant reporting. But in a recent effort to compile progress toward metrics for the National Fish and Wildlife Foundation’s Lahontan Cutthroat Trout Keystone Initiative, which funds much of TU’s work on LCT, I had one of those wonderful “Wow!” moments in seeing—distilled into just a few numbers—what TU has been able to bring to the table for LCT conservation since the Initiative’s inception in 2010.

Back then, NFWF approached me to help develop a “Business Plan” to establish this new funding initiative, because they felt that the federally threatened Lahontan cutthroat trout was one at-risk trout where additional strategic funding could foster collaboration and innovation to help move the needle toward effective conservation (spoiler alert: they were right). I first worked with TU’s Amy Haak to apply the Portfolio approach she and Jack Williams had refined for inland trout to be certain we enveloped important aspects of LCT diversity, and pulled together the primary agency, university and tribal partners involved in LCT management and research to detail threats, goals and strategies for the business plan.

Once the LCT Keystone Initiative was established, I coalesced this group into a steering committee to ensure that proposals under the program hold true to the business plan and match the LCT recovery teams’ priorities. We quickly hit on an efficient and productive model where we, the steering committee, prioritize needs each year and TU writes ‘core grants’ requesting funding for all the needs in one proposal—some of the funding relates to TU’s work while much is given out to partners, but all meets the steering committee’s collective priorities for LCT conservation needs.

When I came to TU in 2006 after having completed my graduate work on LCT, I served on one of four LCT management teams (GMUs/RITs for Geographic Management Unit Teams or Recovery Implementation Teams, depending on the geography) and TU’s relationships with the LCT agencies weren’t always good. In fact, TU had previously threatened to sue over the declining state of the fish. But this collaborative process has since built a tremendous amount of trust and synergy, pushing us all to think creatively on how to get good things done for the fish—because, of course, that is the goal we all agree on.

For instance, a key need that had been identified by the agencies was developing safe harbor agreements with private landowners; these agreements provide legal assurances for landowners that encourage them to allow us to reintroduce Lahontan cutthroats to their lands. One of the steering committee’s first actions, then, was to ask for NFWF support for TU to fund a new position at the Nevada Department of Wildlife for a dedicated Lahontan cutthroat trout safe harbors biologist. The resulting private land agreements have enabled some of our most ambitious recovery work on stream-form LCT (see below).

As another example, we’d often hear from state agencies, “we would love to do that (field project) but don’t have the resources on the ground”. So, we started requesting funding for an annual ‘range-wide field crew,’ with an unusual twist: the crew is hired and run by TU’s LCT Coordinator Jason Barnes (also NFWF-funded), but their work plan is developed by the steering committee partners and they are loaned out to these partners for prioritized work across the entire range of LCT. Since 2013, they’ve worked for all three state agencies managing LCT (Nevada, California, and Oregon), the Summit Lake Paiute Tribe, The Nature Conservancy, the Forest Service, BLM, and TU; they have helped with baseline biological monitoring for safe harbor agreements in 26 streams, sampled LCT populations in 28 streams, assisted with non-native trout removal in 18 streams, monitored habitat in eight creeks, installed stream temperature thermographs in 39 streams, and sampled for non-native trout environmental DNA (eDNA) in nine streams. With NFWF funding, TU’s California and Sportsmen’s Conservation Project staff have also, among other things, run multiple youth Trout Camps in California and Nevada, undertaken a highly collaborative and successful land protection campaign that opened up new Lahontan opportunities, and outreached to thousands of people including students and veterans about LCT. We have funded several LCT displays and “Know Your Natives” day camps at Reno’s Nevada Discovery Center, which serves over 500,000 people a year, helped build barriers to protect several large existing and future metapopulations, and completed and published multiple research projects on LCT – with more in the works – that are guiding conservation planning. We are also now a member of all four LCT Recovery Implementation/Geographic Management Unit teams.

So back to those metrics: what’s the outtake of all this collaboration?

Since 2012, the GMU/RITs have reintroduced LCT to eight historical streams encompassing 65 miles; another 28 miles have been treated and cleared of non-native fish and are waiting for reintroduction/expansion. Because of successful safe harbors agreements, some of these waters include 36 miles of interconnected ‘metapopulation’ habitat, much of which is on private land. We are in the final planning phases for two more metapopulations, which will span 25 and 55 miles each when finished, and we are beginning conversations with key landowners to see if we can’t reconnect two major river basins and join a networked stream system that provides over 100 miles of some of our best LCT habitat.

There’s my “Wow!” moment on what good will, good collaboration, and a lot of hard work can do.

Helen Neville is TU’s senior scientist. She is based in Boise.