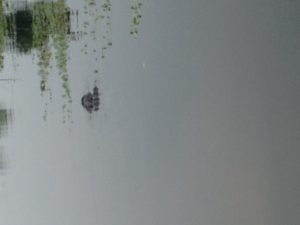 In five days fishing Lake Eufaula, I saw no soft-shell turtles and only a couple of painted turtles. There is a good reason they are not as common there as they are at Hartwell. Another resident of the lake keeps the turtle population very low.

Alligators abound at Eufaula. During my trip, I seldom fished more than an hour without seeing one, especially when near the bank. Around shoreline grass and lily pads, as my boat eased up the bank, every few minutes a log-like body would glide toward deeper water.

Alligators and turtles have inhabited our waters since long before people were around and have adapted well to man-made waters. When we build in areas where they live, they become a problem, especially when folks feed them. They get used to hand-outs and get lazy and are no longer afraid of people.

Turtles, fish, birds and anything else that gets in the water can be food for gators. And they learn where to get easy food. A few years ago, while doing an article at Eufaula, we were fishing a point early in the morning where shad were spawning. Bass and other fish were feeding on them, as were the birds. And gators were everywhere. They were eating shad, bigger fish and birds.

At Lakepoint State Park where I stayed there are tournaments every weekend and even during the week. Many weigh-ins are held in the basin where the boat ramps are located. A few bass die in tournaments and the live ones as well as dead fish are usually “released” near the ramps.

A big gator has learned there is easy food there many mornings. I was fishing under the nearby bridge and a gator slowly sawm by me headed into the boat basin. I followed it on my trolling motor. It went straight to the corner of the basin where several dead bass were floating against the bank.

I watched from a few feet away as it eased up to one, opened its huge jaws and grabbed a dead fish. It then raised its head out of the water, chomping and swallowing the fish. That gator was at least ten feet long, half as long as my bass boat, and its head was a foot wide.

After eating a couple of dead fish it slowly swam back around and under the bridge. I am sure it has a place where boat traffic is lower than it is in the boat basin, so it can doze the day away without being disturbed.

Gators are ugly and scary. The first one I saw in the wild scared me. Kenneth Hattaway and I were fishing a Flint River Club tournament at Eufaula in March 1980 and fished back into a narrow slough up the river. A gator about eight feet long was sunning on the bank about half-way back.

As we fished by it we looked at it but it did not move and did not really bother me. But after we passed it I looked back and it had eased into the water, moved to the middle of the slough and floated there watching us. We were in a 15-foot bass boat and I got real nervous.

I told Kenneth we needed to go, and he agreed. We went by the spot where the gator had been on plane!

Another time while at Eufaula I had been watching gators for two days. My boat was in the water in the campground with the nose on the bank. My battery chargers were hooked up at the back of the boat. The battery compartment was right at the back and the lid opened forward.

I went down to unhook them before the tournament that morning in the dark. To unhook them I had to squat on the very back of the boat with part of me hanging over the water as I reached inside. As I did that, I kept remembering how silently gators moved in the water, and that they liked to feed in the dark.

It was the fastest I have ever unhooked my chargers!

Gators usually won’t bother you during the day unless you bother them, or if you get near their nest or young. And they are seldom seen near Griffin, rarely moving above the Fall Line.