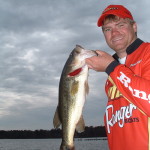 I love writing magazine articles about fishing – at least the research part of it. I always learn new things about lakes I have fished for years when I get a chance to go with other fishermen on Georgia lakes for articles for Georgia Outdoor News and Georgia Sportsman Magazine. Even more fun the past two years has been fishing Alabama lakes I have never seen for Alabama Outdoor News.

Alabama has an amazing variety and number of lakes. Last year on a Saturday I drove to Tuscaloosa and met Steven Fikes to fish Aliceville, a fairly small lake on the Tombigbee River right on the Mississippi line. It is mostly river with a lock and dam that flooded huge areas of swamp sloughs and flats.

I was surprised the water temperature was 58 and the bass were already moving in to spawning areas. Although the river was as high as Steven had ever seen it, from the torrential rains on Friday, we still found clear water in some of the backouts. We managed to catch 14 or 15 bass on spinner baits and rattle baits around grass beds. The biggest two were right at three pounds each.

The next week in March last year, I went over on Thursday and drove back to Lay Lake just south of Birmingham and met Brandon Ligon for another article. Lay is more similar to lakes here, with points, coves and big water. But unlike lakes here grassbeds are everywhere in the shallows. And the spotted bass that abound in the lake get big. Lay Lake is on the Coosa River and Coosa River Spots are known for being big and strong.

The second place Brandon and I stopped he quickly caught a three pound plus spot. I had been sitting in the bottom of the boat taking notes but that fish made me get up and start casting. I immediately hooked a strong fish that took off toward deep water. It pulled so hard I was sure it was a striper or hybrid but I never found out, it pulled off.

The next cast I made I hooked another fish that almost ripped the rod out of my hand. It made a run that made my line sing in the water. After a long hard fight I landed a spot just over three pounds. Brandon caught another spot close to four pounds and a largemouth before they stopped feeding. Those four bass weighed over 12 pounds total.

We fished the rest of the day and I landed one more big spot and Brandon got three more. The smallest bass we caught all day was the 2.5 pound largemouth. All the others weighted between three and four pounds. Brandon said it was not unusual to see a five bass limit of spots in a tournament weighing 20 pounds. Those are quality bass.

The water temperature at Lay was more like here, with most areas around 50 degrees. Of course there was still snow and ice in shady areas around the lake and one creek we went in had 44 degree water near the back. I am sure if the snow had not hit and the water had been warmer we would have caught more fish.

Georgia lakes are great but there is something special about the river lakes in Alabama.