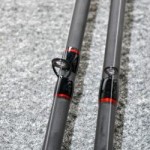 By Frank Sargeant, Editor
from: The Fishing Wire

If you’re like me, you find yourself “needing” practically everything that’s new related to fishing, whether you need it or not.

Micro-guide rods have been around for several years now, and have been a popular seller in many well-known lines. Here’s the basic pitch that has made them take off:

Micro-guides are much smaller and lighter than conventional guides and are usually “single foot”, thus do not impede the natural action of a quality rod blank.

Micro-guides keep the line closer to the rod blank than conventional guides, which results in better performance on casts as well as when fighting fish.

Micro-guides fit into rod tubes aboard a boat more readily than standard guides, thus are less subject to damage.

And here’s the biggy: Micro-guides look cool. You have to look closely to see them at all. They give the rod a sleek, modern appearance-and that’s probably the primary reason they have taken off so well.

But could it be that there’s a real performance difference?

The Falcon BuCoo Micro is a good-looking mid-range rod with the fit and finish of high-dollar sticks.
We asked Chris Beckwith at Falcon Rods to help us out on this one. Falcon makes an amazing array of rods for every purpose, and in fact in their mid-priced BuCoo Line they have a pair of baitcasters that are identical in length, action and power-except the BMC-7MH has micro-guides, the BMC-5-17 has conventional.

Both are 7 foot rods rated for 12- to 20-pound test line and lures of ¼ to ¾ ounce, in medium heavy action with medium-fast tips-like most top quality rod makers, Falcon distinguishes between the “action” or power of the rod and the tip stiffness.

Both BuCoo’s are constructed on Falcon’s FXB American-made graphite blanks with all Fuji guides. Both have exposed-blank reel seats for sensitivity, and EVA grips, with 14 ½ inch handle length which makes power casting and big hook sets easy. Weight is a near match at around 4 ounces. Both feature Falcon’s five-year warranty.

In my tests with Shimano Chronarch 200-E7 reels, the casting range was the same for both micro and standard versions throwing a 3/4 ounce weight on 12-pound mono, about 150 feet. The feel in the hand was also the same. Either is an easy stick for all-day casting.

I fished them interchangeably on several trips to Lake Guntersville in North Alabama, and had to look to tell which was which-I could feel no difference in their handling while throwing everything from topwaters to lipless crankbaits to big swimbaits and football-head jigs. Ditto on hook-setting, very similar.

I’d say the micro makes better use of the power in the rod in handling heavy fish, perhaps because of the additional guides which keep the line more closely following the spline of the graphite.

The lower height of the guides also makes them somewhat less likely to grab a loop of loose line and create a tangle, though I had no problems with this on either version of the BuCoo rods.

It is significantly harder to string up a micro-guide rod, but of course that’s a chore you don’t have to do often and shouldn’t be much of a factor in your buying decision.

However, if you are among those anglers who frequently make use of a leader, which requires a knot that slides through the first several guides, micro-guide rods may not be for you. Anglers who throw topwaters on braid, for example, frequently add 12 to 18 inches of monofilament because the slightly stiffer mono is less prone to loop back on itself and tangle the hooks as you walk the dog. And some feel a foot or two of fluorocarbon, much less visible than braid, increases the number of bites in some situations. But getting a line-to-leader knot to fit through a microguide can be a challenge, to say the least.

Other than that, there’s not much to distinguish one from the other.

Bottom line is, if you “need” a micro-guide rod, go ahead and buy one. They do look cool, and the slight bump up in price is worth it when you go strolling down the dock in front of your envious buddies. But it probably won’t make a great deal of difference on your casting or fish-fighting ability.

For more details on the whole Falcon line, visit www.falconrods.com.

3 thoughts on “Are Micro Guides On Fishing Rods Better Than Regular Guides?”