Justin Lucas: The Path to Angler of the Year
from The Fishing Wire 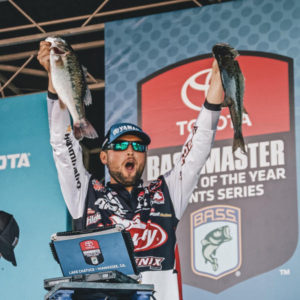 This time, just one year ago, Justin Lucas watched the Angler of the Year championship tournament come and go from the sidelines. 2017 would mark his worst year on the Bassmaster Elite Series and leave him without a bid to the following Bassmaster Classic. With only a short winter to reflect and prepare for the 2018 season, Lucas went to work.

“I had a tough year last year. I’m not exactly sure why, but I think it was because things got out of whack in my fishing,” said Lucas, referring to his season in which he finished tied for 64th place. “I put too much emphasis on practicing to win instead of practicing to do what I do best. I’d fish a technique that I wasn’t good at just because I thought that was the way to win.”

Frustration and forcefulness has proven to be the downfall of many anglers’ seasons. For Lucas, there’s no question in defining what set him free on his route to winning AOY.

“The birth of my son, Cooper Jack, had a huge impact on me. It’s unbelievable what something like that can do to your thinking. I realized that regardless of how I fished or where I finished in a tournament I had a responsibility to help take care of him and to set an example for him, even at a young age.

“Recognizing that there were other things more important in life than the tournament I’m fishing in allowed me to relax and just do my thing. In the end, that was what I needed to get things back on track.”

From the first cast of this season, it was noticeable the tides had turned. The 50th year of Bassmaster and the 2018 Angler of The Year would belong to Lucas.

With most of his focus on becoming an elite father, Lucas settled back into the zone on the water. Lucas relied heavily on a set of techniques he perfected through a childhood on the California Delta and nine years on professional tours. Whether flipping, finessing, or showing off topwater dominance, Lucas tallied five straight top 12 finishes doing what he does best.

“I had something to prove to myself this year. Nobody else. I didn’t want to be that guy who had three awesome years and couldn’t come back.”

There is no path leading to an AOY title. No formal coaching or game script that guides young anglers. Lucas was no exception to the uphill climb. He owed his introduction to the sport to his grandfather Jack, but the journey thereafter, to an internal fire. Passion and intensity fueled a progression from local tournaments through the ranks, into the forefront of the Fishing League Worldwide (FLW) tour and, ultimately, to hoisting a Bassmaster AOY trophy.

Amongst recent dramatic shifts in the professional bass fishing landscape, this victory serves as a testament to the next generation of anglers. Young and hungry, Lucas exemplifies that the baseline of a champion is a humble appreciation for sport and pursuit. But throughout each elite performance and the persistent competitive drive, the bond that tied skill and success was Cooper Jack Lucas.

“He’s not going to learn to be the man his mother and I want him to be if all I show him is that winning a tournament is what matters in life. A real man is honest and has integrity. He lives a life that makes everyone around him proud. I’d like to be the man who teaches Cooper Jack to be like that.”

Looking ahead to the 2019 season, Lucas said, “There’s no way to know what next year will bring. I hope it’s good on the fishing side of things but more importantly I’m going to do my best to make things good everywhere else.”