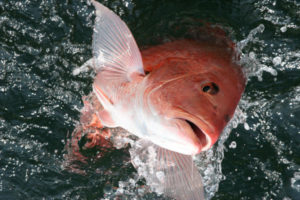 Gulf anglers who are dedicated to catching Alabama’s most popular reef fish species – red snapper – will have an opportunity to share their opinions with the policy makers at the Gulf of Mexico Fishery Management Council meeting in Mobile later this month. During the meeting, members of the Gulf Council will continue discussions on a change in red snapper management that would give the individual Gulf States more flexibility in establishing the length of the fishing season within each state.

Alabama Marine Resources Division (MRD) Director Scott Bannon and MRD Chief Biologist Kevin Anson urge all anglers who want to see the individual states manage the reef fish fishery to become a part of the process when the Gulf Council meets Oct. 22-25 at the Renaissance Battle House in downtown Mobile.

The Reef Fish Committee meets at 8:30 a.m., Tuesday, Oct. 23, to discuss Amendment 50, which deals with state management of red snapper. The segment of the Gulf Council meeting Bannon and Anson highlight as the chance for the public to participate in the process is the comment period from 1:30-4:30 p.m. on Wednesday, Oct. 24.

“In this particular Council meeting, we really need to make some decisions on the state management plans that could come into effect after 2019,” Bannon said.

Alabama’s 2019 red snapper season remains under the exempted fishing permit (EFP) that NOAA Fisheries granted for the 2018-2019 seasons. That EFP allowed the individual states to set seasons that would allow harvest of a specific number of pounds of red snapper as long as it did not exceed the overall quota.

Alabama anglers showed a renewed enthusiasm for red snapper fishing this past summer, and MRD officials were forced to close the snapper season early. The Marine Resources Division based its proposed 47-day 2018 season on the data gathered from the 2017 snapper season. That data included daily catch rate, size of the fish and the amount of angler effort (man-days fishing for snapper).

Alabama closely monitors the red snapper harvest through its red snapper reporting program, known as Snapper Check. After the data came in on July 8, MRD realized that red snapper fishermen had taken advantage of near-ideal conditions to catch fish at such a rate that the quota of 984,291 pounds of red snapper would be exceeded unless the season was closed after 28 days.

“Everything that you would be concerned about as an angler wasn’t a concern,” Anson said, explaining why angler participation and harvest rates skyrocketed in 2018. “When you go offshore, you have to make sure you have enough money to pay for fuel and supplies. The economy is good. They didn’t have to worry about the weather, as winds and seas were great this year during the snapper season days for the most part. And, the fish are there and they’re easy to catch.”

Although the 2019 snapper season will still fall under the EFP, no plan is in place for 2020 and beyond. Without a new plan, the private recreational angler would revert to a federal season, which was ridiculously short before the EFP was granted.

“If we go back to a federal season, that may not work out very well for private recreational anglers,” Bannon said. “There will be a lot of discussion on Amendment 50 at this Council meeting.”

Anson, who is MRD’s representative on the Gulf Council, said Amendment 50 is an alternative to the traditional federal form of fisheries management. “Basically, it’s a form of management that apportions a percentage of the recreational quota to each state. Then the states set their seasons based on those available pounds,” Anson said.

“Amendment 50 states that the Gulf states have a portion of the total recreational allocation, which may or may not include federal charter boats,” Anson said.

Alabama’s charter-for-hire fleet opted to abide by traditional federal management for the 2018 season, which gave them a 51-day season, fishing straight through from June 1 through July 21.

Anson said charter-for-hire vessels are included in Amendment 50, although there is discussion to exclude them from the amendment.

Anson said several options are on the table in Amendment 50 to determine what each state’s apportionment would be, including traditional harvest data and a biomass estimate.

The biomass (number of red snapper in the Gulf) estimate may not bode well for Alabama’s share.

“The assessment estimates that the majority of red snapper are west of the Mississippi River,” Anson said. “That would be Louisiana and Texas. The proportion of red snapper for the other three states is lower. Compared to historical landings data, our allocation of fish would go down in that situation.”

“Under this amendment, states could set their seasons,” Bannon said. “The seasons will be set under a total allowable catch for the entire Gulf. Probably the number one topic for Amendment 50 is can the states agree on the allocation percentage for each state and vote that forward so that everything will be done in time for the 2020 season.

Bannon said historically the private recreational anglers have been reluctant for whatever reasons to provide public testimony and participate in the process. He hopes that will change later this month.

“Red snapper fishing in Alabama is a huge deal,” Bannon said. “This Gulf Council meeting is being held in Mobile. I want to encourage people from Alabama who consider this to be very important to come and provide public comment during the process. My take is that if you can take a day off to go fishing, then you can take a day off to come to the meeting and be a part of the solution for 2020 and beyond. We get a lot of people whose response is ‘The process is stupid’ or ‘It doesn’t work,’ when they don’t know how it works. This is their opportunity to see how the Council process works.”