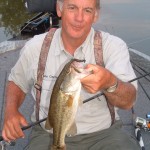 If you ask most bass fishermen how to catch suspended bass, don’t be surprised if the response is: “you can’t.” Suspended bass present fishermen with one of the most difficult problems to solve and many just give up and go look for easier fish to catch. But there are ways to get them to bite and tactics that will help you land fish that others give up on.

Bass suspend away from structure and cover for a variety of reasons. One of the most common is when lakes stratify, forming a thermocline between hot upper oxygenated layers of water and cooler, deeper layers with little oxygen. Bass can’t live in the cooler waters so they get as close to it as they can, suspending over deep water at the level where they can still find enough oxygen.

Suspended bass will often be found holding off points and humps at the most comfortable depth to them. They will be over a deeper channel but not far from the rise in the bottom where it meets the depth they are holding. That allows them to run in and feed, then move back out over deeper water.

Some lakes present a special situation where standing timber under the water rises many feet off the bottom. Bass will often use these trees as cover, relating to the trunks and limbs while holding well off the bottom of the lake.

The best way to find suspended bass where you fish is to ride the lake and watch a depth finder carefully. Follow channels and ditches while watching for fish holding between the bottom and the surface. Riding back and forth over a point or hump, not turning your boat until well past the drop of the bottom contour, will show you schools of bass suspended near them. And moving slowly over standing timber will reveal bass suspended in it if your depth finder is a good one.

Depth control of your bait is critical to catching suspended bass. They are holding at a set depth and will not move far up or down to take a bait. So finding the bass and knowing what level they are holding is just the first step. You must then find a way to put your bait at the level where they will see it.

A crankbait is a good way to catch suspended bass but you must make it work at the dept the bass are holding. There is an old tried and true method of doing this that has fallen out of favor. Trolling it a great way to get your crankbait down to a set depth and keep it there while covering a lot of water, but it is against the rules in bass tournaments so many bass fishermen have abandoned it, but it still works.

The depth varies depending on factors like trolling speed, line size and amount of line out, so you need to experiment to find out the exact combination to produce the exact depth you want. Mark a set depth on a point then troll over it varying line size, length of line out and trolling speed until your bait just ticks the bottom at the depth you want it to run, then troll through schools of bass at that depth.

You can do the same thing if you are limiting yourself to casting, but line size and the distance you cast are even more important. And boat position becomes critical. When you cast a crankbait like the Bomber or Bandit it will dive to its maximum depth as you start your retrieve then rise when it gets near the boat.

Since your crankbait will stay a the desired depth for only a short distance when casting, you must locate the schools of bass then position your boat near them so you can cast past them and work the bait back, keeping it at the critical depth as long a as possible.

Some newer baits on the market make casting and controlling your depth easier. Both the Swarming Hornet and the Fish Head Spin are lead-head baits with a small spinner under the head. When you attach a Roboworm E-Z Shad or other shad looking plastic bait, it imitates a baitfish.

Tie on one of these baits and vary the weight of the lure and the line size to match the conditions like wind, water clarity and depth you want to fish. Smaller diameter line helps keep the bait at the depth you want to fish and you can get by with lighter line since the bass are away from cover.

Position your boat near the school of suspended bass and make a long cast past it. Feed line to the bait as it falls so it drops straight down and count it down. Figure one second per foot of drop, but to be more exact cast to a known depth and count it down to make sure your are accurate.

When the Fish Head Spin or Swarming Hornet reaches the correct depth, slowly reel the lure along. A slow, steady retrieve keeps the spinner turning and keeps the bait at the optimum depth. You can cover much more water at the best depth with one of these lures than with a crankbait since the lure drops straight down to the correct depth then stays at that depth all the way back to the boat.

One of the easiest and most effective ways to control the exact depth you want to fish is by using a drop shot rig. A drop shot rig is one where the lead is tied to the very end of your line and a hook tied on up the line. Special hooks and sinkers are designed for drop shotting and make it a more efficient way to fish, but you can use any sinker and hook as long as the hook is very sharp.

Gamakatsu hooks are known to be super sharp and they make a Drop Shot/Split Shot hook that comes in a variety of sizes and you can choose red or black hooks. These hooks are relatively small and are perfect for nose hooking small plastic bait like a Slider Worm, Roboworm or Gulp Minnow Grub.

A soft, straight worm like the Slider or Roboworm is the usual choice for drop shotting, but experiment with other shapes of baits, too. Some days the bass might like a fat Gulp Grub with a quivering curly tail over a thin straight worm.

Choose one of the plastic baits that match the size of the baitfish the bass are eating, and use a color based on water color. Clear water is usually best for drop shotting so line choice is critical, too. Fluorocarbon line is the standard for drop shotting and Sunline is invisible in the water and holds up well. The lack of stretch of fluorocarbons like Sunline also help with hooking fish on light line.

This may sound strange but, since the sinker is at the end of the line, when you hook a bass and reel it in, there is nothing to get in the way of landing it. You may have a lot of line trailing the bass but you can land the fish without reeling it all in.

Get your boat right on top of the school of bass and hold over them watching your depthfinder. Let the sinker on your drop shot rig hit the bottom and you know your bait will be at the exact depth you tied it above the sinker. Twitch your rod tip, making the worm or grub dance right in front of the bass’s mouth.

Drop shotting is the best way to catch bass suspended in timber, too. For these bass, tie a hook a few inches to a foot above a sinker and get right on top of the fish. A good depth finder will allow you to watch your bait as it falls and you can stop it right in front of the bass and shake it. You are usually targeting a single bass in timber rather than a school. A drop shot rig moves the sinker away from the bait while still giving ou exact depth control.

Don’t let suspended bass ruin your day. Try these techniques to land them when others are just shaking their heads.