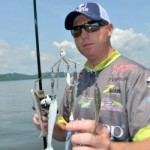 Casey Martin On The Umbrella Rig

It ain’t as easy as it looks.

Though he wins plenty of money with the umbrella rig, he says he’d prefer not to throw it any more than he has to. That’s the message from FLW pro Casey Martin about flinging the notorious umbrella rig, AKA the “Alabama Rig”, on the waters of the southeastern U.S. in pursuit of tournament-winning largemouth bass.

“It can be really effective and catch fish that other lures won’t, but you’ve still got to get in the right places for it to work,” says Martin, who lives south of Huntsville, AL, near his favorite lake, Guntersville. “It’s no miracle rig, for sure.”

Martin said that, contrary to popular belief, he doesn’t consider the A-Rig to be primarily a winter rig, either.

The five-armed wire rig allows creating the illusion of a baitfish school running through the water. It has proven amazingly effective on big fish in deep water.

“I throw it pretty much year around, except during the peak of the spawn,” says Martin. “If you’re fishing tournaments you pretty much have to have 5 pound fish to be in the money, and the umbrella rig gives you the best shot at those fish in most lakes most of the time.”

The big chore in success with the multi-lure rigs, says Martin, is studying charts and then idling along and watching your sonar. If you don’t put in your time finding the offshore areas likely to hold schools of fish, the A-Rig won’t bring you much success. 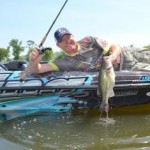 Casey Martin lands a nice bass on the umbrella rig

“There have been tournament days when I’d go all day long without putting one fish in the boat, and then find a school on a main river ledge and catch a limit in five casts-in fact I once caught a limit of five-pounders in two casts, three on the first cast and two on the second.”

Martin primarily throws the Picasso School-E-Rig Bait Ball, a five wire rig with added spinners, to which he adds jig heads from 1/8 to 3/8 ounce and shad tails 3 to 6 inches long.

He fishes this where he finds a set of conditions that usually spell success.

“I want to be on a hump that’s near the main channel or a deep creek drop-off, I want to see a lot of shad on the sonar, and I want some trash on the bottom, rocks or stumps or mussel shell. If you hit enough spots that look like that in 15 to 25 feet of water, you’re going to find a school of big fish sometime during the day,” says Martin.

Martin says that fish of this size are a must to place well in large tournaments, and the umbrella rig is one of the easiest ways to connect with them.
He said his side-scanning sonar/GPS units, two on the console and one up front, are an important part of his strategy.

“A lot of times you’ll see bait or cover out to the side that you’d miss completely if you’re just looking straight down with conventional sonar,” says Martin. “You really have to have the structure-scanning electronics to be competitive in tournaments these days.”

Martin said he lets the umbrella rig do most of the work once he heaves it out to where the fish should be.

“I let it sink to bottom, and then I crank it back steadily just fast enough to make the tails on the soft plastics swim,” says Martin. “You don’t have to add any extra action-there’s enough going on with all the spinners and shad tails.”

Unlike many anglers, he fishes the rigs on 25-pound-test fluorocarbon rather than on 65-pound-test braid.

“I just don’t like the way braid casts, so I stay away from it unless I’m fishing where there’s a lot of wood cover,” says Martin. “I lose a few rigs, but I think I get more hits than I would with braid.”

PROS AND CONS OF UMBRELLA RIGS

Casey Martin readily admits he’d rather not throw the umbrella rig ever again-but he has to if he’s going to make a living as a pro angler.

“If you’re fishing a tournament where it’s legal, 90 percent of the time you have to fish it or you don’t finish in the money,” says Martin. “I’d just as soon see it banned for all competition, but as long as it’s legal I’m going to throw it.”

He said he does not agree with some anglers who say the extra hooks on the rig cause lasting injuries to fish, however.

“It does stick them sometimes and you’ll see some fish with sores, but they’re minor and they heal up fast,” says Martin. “The reason I don’t like the rig is that it’s murder to cast all day, and it takes some of the interest out of trying to figure out a pattern that you’d be fishing otherwise.”

To learn more from Casey Martin, visit his website www.caseymartinfishing.com.