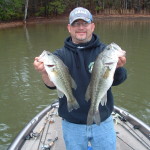 It is great to go to full lakes this summer, the first time in several years. But all the rain sure is a mixed blessing. It fills the lakes but fills my yard with mosquitoes and I think it encourages fleas that continue to be a problem.

The rain also makes it so humid it is hard to fish during the day. Even when it is not raining I sweat so much I stay wet. And the clouds will fool me every time. I don’t think I need sunscreen until I realize, too late, I am getting blistered.

Wednesday I went to Jackson Lake and met Jason Williams to get information for a Georgia Outdoor News article. He got there that morning and fished until he met me at Berry’s Boat Dock at 1:00 PM. I was disappointed when he told me he had caught some small bass but nothing over two pounds, what we needed for pictures.

The night before Jason and his partner had come in second in the Tuesday night Berrys tournament. They had 7.5 pounds and it took only nine pounds to win. That is a low weight for one of their tournaments and shows how tough fishing is right now.

Jason showed me ten spots to put on a map where he catches bass in the summer. Unfortunately, all ten were spots I already knew about and fish often. But that just shows they are good spots – when a fishing spot is good it seems a lot of fishermen find the same place.

We didn’t fish much since it was so hot. I was very glad to get back in my air conditioned truck at 4:00 to head home. I would much rather fish at night this time of year.

Last Sunday nine members of the Flint River Bass Club fished our July tournament at West Point, and the fishing was tough there, too. Several people stayed home because we figured the lake would be a madhouse since it was a holiday week, but the all-day rain kept most pleasure boaters off the water. We didn’t see a single skier and only a couple of skidoos all day.

After fishing from 6:00 AM to 2:00 PM we brought in 34 bass weighing about 41 pounds. There were only four largemouth weighed in. Five people had limits and there was only one fisherman without a keeper.

Al Rosser made it two in a row, winning with five weighing 7.02 pounds. Chuck Croft had five at 6.72 pounds for second and his 2.63 pound largemouth was big fish. Third went to Roger Morrow with five at 6.09 pounds and Don Gober’s limit weighing 5.93 pounds was good four fourth.

It seems the smaller fish bite better right now at West Point and Jackson than the bigger fish. And most of the fish caught at Jackson were spots, too. They are more aggressive and feed more than largemouth in any kind of weather.

The old saying “If it wasn’t for bad luck I wouldn’t have any luck at all” seems to be my motto lately. I keep shooting myself in the foot, losing bass I hook in a variety of ways. First thing that morning I had a strong fish pull off a chatter bait. That is a bad way to start the day. Then I missed a couple of hits on a topwater bait.

Al fished with me and caught a keeper at about 8:00, on the next cast after I saw a spot about the same size chase my jig and pig back to the boat without hitting it. Then I hooked and lost a bass in the same place on a jig head worm.

I did land one keeper from that point before we left. Then Al got another keeper off the next point we fished. A little later he got his third, then I caught a spot on a jig and pig from a brush pile.

The next rocky point we fished I felt a hit and missed the strike. As I reeled in I saw a bass weighing at least five pounds chase my bait almost to the boat and turn away without hitting it. Al got two more off the next point we fished, filling his limit.

A big school of fish came up and started feeding on top and Al and I had fun catching a some three pound hybrids. We kept two to eat but went back to trying to fill my limit. I got hung on a rock and as I eased the boat over to get it, shaking my rod tip trying to get it loose, a fish grabbed it and took off. I missed it but Al’s worm was right beside mine and he caught his sixth keeper. I finally got my third with just a few minutes left to fish out of a brush pile but that was it.

An even worse way to start happened at 5:15. We started down the road to Pyne Park ramp but a pickup was blocking it. I called the campground and woke the manager up and he said the ramp was blocked off because of all the vandalism in the park over the weekend.

Al and I got on the phone and called everyone in the tournament and changed to Horace King Ramp nearby. As we turned around in the campground, not easy in the dark with a boat, the campground manager came out and said he was moving his truck and opening the ramp, but it was too late.

The least they could have done was put up a sign at the highway saying the ramp was closed!