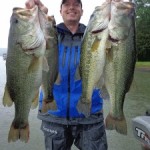 One of the most overlooked patterns by Bass Anglers in early summer is the “Mayfly Hatch” On lakes and rivers across Alabama in the Mid South, such as Wheeler, Wilson, Guntersville, Lake Lanier and Nickajack Lake the peak of the hatches occur during the months of June and July.

Anglers that have not taken advantage of the hatch are missing out on some of the summer’s best action. How do you know when? Well, if you drive near a lake or stream in June or July and you need to wash the truck after doing so…the hatch has started. On the water, look for overhanging tree and boat houses to become covered with millions of tiny mayflies.

They seem to appear from out of the blue and literally every species of fish benefits from this annual buffet. Triggered by the warmer weather, rising surface temperatures around 72-75 degrees, the larva wiggle from the substrate and emerge, leaving a floating husk on the lake surface. The adult takes to the air for a short life span which last only a day or two. Once in flight the adults mate and eggs are dropped into the water where they may lay dormant until the following year.

Every species of fish will come to the table and partake of these abundant morsels that fall from the overhanging trees, brushes and docks. This is a dock and brush flippers dream…the mayflies bring smaller pan fish such as bluegill and crappie; right behind them will be bass following the food source!

Area trout fishermen have long taken advantage for this pattern with fly rods catching everything from trout to walleye. Meanwhile, some bass anglers have learned to take advantage of the summer seasonal patterns where currents wash flies or larva against banks or submerged sandbars, it is here where hefty largemouth or illusive smallmouth can be found.

Bass anglers should target areas such as steep banks with over hanging trees or docks…docks with a night light source can be extremely productive. Flipping and creature bait such as a D-bomb from Missile Baits or a ½ ounce Jig from Tightline Jigs is a fast way to load the boat with hefty bass. Crank Baits such as a SPRO Little John which dives 2-5 feet on deep channel bends use a SPRO Little John DD to get under the schools of smaller fish. Punisher and Assassinator Compact Spinner Bait can be extremely effective as well. Let’s not forget about the early morning top water bite. This is one of the most vicious hits know to anglers, navigate a 3/8 Assassinator Buzz Bait or SPRO Dawg 100 around over hanging trees or docks and hold on.

Lures for May Fly Hatch

Anglers can eliminate unproductive areas by employing their electronics such as Humminbird Side Imaging and Down Imaging. Cruse by docks and overhanging trees scanning under them and watching for large concentrations of bream and crappie located on the outside edges of the structure.

In the weeks ahead look for some great action around boat houses and steep banks on the main lake shoreline offer the best bets for success. Early morning and late afternoon seem to see increased mayfly activity.

If you’ve never witnessed a feeding frenzy beneath the spell of a mayfly hatch then grab a youngster and head out. It’s a great way to introduce someone to the sport while keeping even the veteran anglers amused as well. After all, catching fish stills brings out the kind in all of us and there’s no better way or time than during the summer season and mayfly madness.