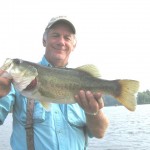 I can catch a bass!

I had a two day club tournament at Clark’s Hill this past weekend and it was fun but frustrating, and several problems about drove me crazy to start.

Went over on Thursday afternoon and got to my place at Raysville Boat Club. Got unloaded and started to get dishes out of dishwasher – i usually start the dishwasher when I leave on the previous trip. It was full of dirty dishes from last summer! The pump had frozen up and tripped the circuit breaker.

Friday morning got up to go out and check some fishing spots and battery was dead in the van. Got my charger I had used the day before and hooked it up, and it had died. Got a battery out of the boat and tried to jump the van off but the van battery was too dead. Took me a couple of hours to do all that and finally get side post van battery out and top post battery from boat hooked up with vice grip pliers to get it started. Let it run an hour to charge the van battery. By then it was raining so didn’t even get out.

Al got to the lake late that afternoon and we got tackle ready. I was worried about the rain, daddy had put gravel down in front of the carport where I parked the boat but mud had washed in over it over the years and it was an uphill pull leaving. Sure enough, we got up the next morning and the van would not move. I had asked Al to bring a chain and we managed to get the van and boat out of the mud after a long scary pull that ended up throwing mud all over the boat.

We launched and made the 15 minute ride down to Mistletoe where the tournament started. We took off and ran to the bridge to see if shad were spawning – no activity. When running to our second stop my butt seat came apart, the seat hit the windshield and went into the lake. The post stayed in the boat, fortunately, and the seat floated. Got it and stopped on a wind blown gravel point.

One thought on “Fishing Clark’s Hill”