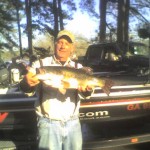 After all the problems, finally my luck changed. As we fished down a wind blown point I picked up a Shadrap and quickly caught two keepers. Then Al got one. We kept working the point and I got my limit by 9:00 and Al had his by 10.

I switched to a jig and pig and got my best keeper of the day, close to 3 pounds, and a couple of fish on a Carolina rigged lizard. We fished some spawning pockets but saw nothing. The water temperature had dropped several degrees and the air was cold – 39 degrees when we took off, so I guess the fish had backed off.

We started hitting different places. On one wind blown point Al got a nice bass on a Carolina rigged lizard It ended up weighing 3.77 pounds and being big fish. In the back of a pocket he got another one almost the same size on a Zoom Fluke. We tried a lot of different things and caught a few fish but they were very scattered. I ended up with 11 keepers, Al had 7, but he had two bigger than my biggest.

We rode back to the boat club to eat supper and get ready for day two. I made sure we parked out of the mud!

Sunday morning was cold when we left before daylight for the 15 minute ride to the tournament blast off, about 39 degrees. There was some breeze so the fog was only back in the creeks and we had ho problem, I was worried about the fog, it would be a long ride in the fog going by my GPS.

When we blasted off we ran straight to the point where we had caught so many the day before and I managed two on the Shad Rap and Al got one but that was it We fished the area and I got one more small keeper on the crank bait but that was it. The wind got stronger and stronger as we hit several places trying to find something.

At about l1 we stopped on a rocky point behind an island where we were protected from the wind and I got another keeper. After working it hard with no more bites I went out in the wind and got a bite and broke my line setting the hook. It broke way up near the rod. I guess a loop in the line had “burned” as I cast and I did not realize it was weak. I use ten pound Sun Line and it is tough. That was two on a jig head worm so I picked up another rod and kept casting. The very next cast I got my fifth keeper on the jig head off the same wind blown point. The wind was so bad we tried to hold and fish it but it was tough.

We hit a couple more places out of the wind and went back behind the island and I got another keeper. That was it for the day. At weigh-in I held on to third with 17 pounds, Al dropped to fourth with 15 pounds. First was 23 pounds, second was 18 pounds. We had 13 people and there were 15 limits in two days. Al’s 3.77 tied for big fish.

We managed to get back to the boat club and get home without any more problems.

One thought on “Fishing A Clark’s Hill Club Tournament”