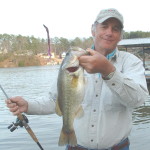 I was happy with this keeper bass

Week before last was a good week in this area of Georgia for big bass. A young man from Griffin caught a 7.53 pound bass at High Falls Thursday afternoon that week and a fisherman from the Oconee Lake area got a bass weighing just under 12 pounds there the same day.

Peyton James was fishing at High Falls Thursday afternoon when the 24 5/8ths inch bass hit a Pop R. Any fish caught on topwater is exciting but one this size will make your heart stop. He also got a 2.5 and a three pounder soon after the big one hit.

At 15 years old Peyton is just getting started bass fishing and he was mentioned here when he did well in his youth bass club tournament at Lake Sinclair a few weeks ago. Peyton is a member of the Jr. Bass Procasters Club in Macon and he made that club’s state team this year.

Congratulations to Peyton – many of us adults fish for years without catching a bass that big.

I was on the way to Clark’s Hill last Thursday when Peyton’s father called me about the big bass. Soon after that I got a call from Jeremy York, owner of Anglers Warehouse in Athens. A friend of his had caught a huge bass that afternoon at Lake Oconee that they thought would weigh 14 pounds, a new lake record.

I told them they needed to get it weighed on certified scales with at least two witnesses just in case it was a lake record. Turns out the bass weighed just under 12 pounds – you know how we fishermen exaggerate! – just under the state record. It is still a great catch. I didn’t get any info on how it was caught.

This is a great time of year to catch a big fish since the females are shallow looking for beds. There are many ways to catch them.

Last Saturday and Sunday 13 members and guests of the Spalding County Sportsman Club fished our April tournament at Clark’s Hill. We caught a lot of bass even under the cold, windy conditions that surprised us.

There were 103 bass weighing about 174 pounds brought to the scales. We had 15 limits weighed in during the two days and everybody caught some fish. Bass were caught on a wide variety of baits, from topwater to jig head worms.

Kwong Yu won with ten weighing 22.30 pounds, Raymond English was second with ten at 18.84 and I was third with ten weighing 17.06. Al Rosser was forth with six weighing 15.05 and his 3.77 pound bass tied one the same weight caught by Billy Roberts for big fish. Niles Murray came in fifth with nine bass weighing 14.64 pounds.

After a disastrous practice day Friday when I never got my boat in the water, Al and I both had limits before 10:00 AM Saturday. We found fish feeding on some rocky points and caught most of them on Shadraps but also got fish on a jig and pig, Carolina Rig and jig head worm.

Al had two big ones, almost the same size. One hit a Carolina rigged lizard on a wind blown point and the other smashed a Fluke back in a pocket. He had seven keepers that day and I had 11, but his two big ones put him in first for the day and I was in third.

Sunday we ran to those points and caught three on Shadraps but that was it. I managed to scratch out three more keepers over the next six hours, all on jig head worms, for a limit but Al was not able to catch another keeper.

The wind was awful. One point I like to fish we had to crank the gas motor and move upwind of it, make a few casts as we blew backwards by it with the trolling motor on high, then crank up again. I could not keep the trolling motor in the water the waves were so bad. That kind of fishing is miserable!