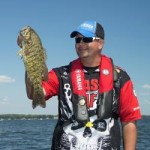 Jeremy with smallmouth bass that hit a vibrating jig

From The Fishing Wire

Of all the lures Yamaha Pro Jeremy Starks normally stocks in his boat and truck, his supply of vibrating jigs always gets packed within easy reach. They’re not just his “go-to” lures if fishing gets tough, they’re his “anytime, all the time” choice.

“Honestly, I don’t think there’s a wrong time to fish a vibrating jig,” explains Starks, winner of the Bassmaster® Elite Series event on Tennessee’s Douglas Lake last season. “My favorite time to fish them is right now where water temperature is still in the 40’s on many lakes, but these lures are so versatile you can really use them anytime.”

Vibrating jigs look like normal jigs, except they have a small, rectangular shaped vibrating blade attached to the front of the jighead. As the lure moves through the water, the blade swings from side to side, often ticking the head – thereby adding sound – and also causing the jig to vibrate and wobble from side to side.

Rip-rap, docks and other cover are ideal cover for the wobbling lures, which are nearly snag-proof.

“Vibrating jigs are a relatively new design in lures,” continues Starks, who first began fishing them in competition in 2006, “and even today they’re not that widely used simply because a lot of bass fishermen don’t really understand them. Vibrating jigs are most often compared to spinnerbaits, but they have more vibration than a spinnerbait although not as much flash. They’re far easier to fish through submerged vegetation than spinnerbaits and have a smaller profile, but they’re not weedless.”

The Yamaha Pro’s favorite fishing technique with vibrating jigs is working them in clear water over and through submerged vegetation like hydrilla or milfoil in depths of 10 feet or less, places bass will not only be staging now in preparation for spawning, but also the same areas they usually return to for much of the remainder of the year. He retrieves slowly so the jig swims just over the top of the vegetation, then stops reeling to let the lure sink into the greenery. Then he rips it free and starts slowly reeling again.

“A vibrating jig comes out of the vegetation much easier than a spinnerbait,” Starks explains, “which is why it’s so effective for this type of fishing. Even lipless crankbaits get snagged in the grass, but the jigs come through without any trouble.

Starks sometimes changes the size of the blade or switches to heavier jig bodies, depending on conditions.

“At the final Elite tournament at Lake Oneida last summer, I fished a vibrating jig over hydrilla that had grown to within about three feet below the surface and caught smallmouth bass all day long. I ended up giving lures to some of my competitors who were fishing beside me because they couldn’t catch anything with their spinnerbaits.”

Starks adds a soft plastic fluke-style trailer to his vibrating jigs to enhance the lure’s visual appeal, as well as to add more action. He also occasionally changes blade colors to add or reduce flash, depending on water conditions.

“Vibrating jigs are not weedless,” he cautions, “but that doesn’t mean you can’t fish them around or through wood cover. I like to twitch my rod or change retrieve speeds around wood so the jig has a more erratic action. I think it helps compensate since I can’t really fish through thick limbs and brush. If I see flooded brush along a shoreline or off the end of a point, I’m definitely going to cast to it, just a little more carefully.”

Other places Starks regularly fishes vibrating jigs are over and around rocks, along riprap walls, and underneath boat docks and piers. For these types of places, he normally fishes 1/2 or 5/8 oz. vibrating jigs, rigging with 15 or 20 pound fluorocarbon line and a medium action rod, using a slow, steady retrieve. When he specifically targets thicker vegetation, he changes to 30 pound braided line and a stiffer rod for his ripping presentation.

“Vibrating jigs are excellent big fish lures, too,” the Yamaha Pro concludes. “Although I haven’t caught any real monsters, I have caught a lot of fish in the five to six pound class. There’s just something about the lure’s different type of vibration and its light ticking sound that seems to trigger big bites.”