Decline in population raises concerns over how much and how quickly to reduce the harvest. 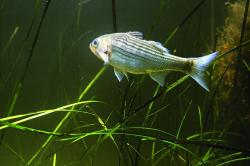 The striped bass population along the East Coast has been declining in the last decade. (Dave Harp)

For years, striped bass were a textbook example of successful fishery management.

After a dramatic population crash in the early 1980s, a painful harvest moratorium was put in place. As hoped, the population rebounded. By 1995, it was declared “recovered” – and even then the population continued to climb.

By the early 2000s, commercial fishermen and recreational anglers were seeing more large striped bass than at any time in recent memory.

Fast forward another decade, to 2014, and the picture is starkly different. The spawning population is at about the same level it was in 1995, when it was declared recovered, but instead of trending upward, it’s been declining for a decade.

It is expected to drop below the “recovered” threshold level next year.

The Atlantic States Marine Fisheries Commission, which regulates the management of migratory fish species and includes representatives from all East Coast states, is weighing options that range from a 25 percent harvest reduction next year to phasing in a smaller, 7 percent annual reduction over three years – or even doing nothing at all.

“This is the premier fisheries management success story,” said John M.âR. Bull, commissioner of the Virginia Marine Resources Commission. “I don’t think anybody wants to jeopardize that success.”

But, views about what the ASMFC should do to maintain that success when it meets in late October – and even the seriousness of the current situation – vary widely.

Some groups representing recreational anglers are leading the charge for aggressive, and quick, action.

Tony Friedrich, executive director of the Coastal Conservation Association in Maryland, said he supports a 25 percent reduction, but only because the ASMFC’s options don’t include a greater cut.

The fish “are in a lot of trouble,” he said, citing angler surveys showing that interactions with fish – basically how often they catch a striped bass – have fallen 75 percent since 2006.

“If you talk to a lot of people on the East Coast, they are up in arms,” Friedrich said. “They want to go a step beyond 25 percent.”

In comments to the ASMFC, the group Stripers Forever contends “the signs of diminishing abundance have been ignored for years.” It calls for a 25 percent harvest reduction effective next year, but said even that is “too little too late.”

On the other hand, Billy Rice, a commercial fisherman who has worked 46 years on the Potomac River and Maryland tributaries, said striped bass will soon become more abundant in the Bay as a result of a strong reproduction in 2011. Fish born that year will soon reach legal size in the Chesapeake, and shortly thereafter along the coast.

“We need to keep a close eye on it, but I wouldn’t even come close to calling it a crisis,” said Rice, who is a member of both the Potomac River Fishery Commission and an advisory panel to the Maryland Department of Natural Resources.

Absorbing a 25 percent reduction in a single year, he said, “would virtually cripple our commercial fishing industry.”

Rice contends that, given time, striped bass will bounce back, and that it’s not realistic to think that any stock can be consistently maintained at record-high levels. “Fish naturally go through cycles, no matter how well you manage them,” he said. “We are not going to stop the natural cycle that has been going on since the beginning of time.”

The different perspectives reflect, in part, longstanding tension between recreational and commercial interests, which compete for the same fish.

Commercial fishermen, equipped with large boats, nets and often decades of individual and community knowledge, are efficient. They typically can catch their given quota despite competition from recreational anglers, as long as the stock is at a healthy level.

Recreational fishermen do best when fish are very abundant. The fish are more easily found, and the commercial quota typically takes a smaller portion of the available population. As the population declines, recreational anglers with fishing lines are less efficient than watermen with nets, and have a harder time finding fish – even if the stock is still considered to be at a sustainable level.

That’s reflected in ASMFC figures which show spikes in recreational harvests when the striped bass population hit its peak in the early 2000s. In fact, the estimated dead discards from the recreational fishery along the coast – those fish that are caught and released, but die anyway (about 9 percent of the released fish) – exceeded the entire commercial catch as recently as 2006.

As abundance has declined, though, the commercial catch – which is based on a quota and therefore fluctuates less from year to year – has overtaken the recreational catch in the Bay and in some other states that have a commercial striped bass fishery.

So, for recreational fisheries, the situation can look bleak – but the stock itself is not in peril, Goldsborough said.

“From a biology standpoint, I think we are OK,” he said. “We do need to tighten the belt and ensure that we turn that trajectory back up for the spawning stock biomass. I don’t think it is a crisis, but there definitely is a need to act..”

The more difficult question, said Goldsborough, who is also a member of the ASMFC, is weighing management impacts on commercial and recreational sectors.

The reason for the decline in striped bass abundance over the last decade, scientists say, has been a series of years with poor reproduction.

In the 13-year span from 1993 through 2005, reproduction was at or above the long-term average 10 times, including the three best years on record in 1993, 1996 and 2001, as measured by the Maryland Department of Natural Resources Young-of-Year index. The Chesapeake Bay is where the vast majority of striped bass found along the East Coast are spawned.

Successful reproduction typically requires two things: lots of eggs produced by females and weather conditions that promote the survival of their young.

Because they can’t control the weather, fishery managers try to keep the abundance of adult female fish high with the hope that when the spawning fish mesh with the right conditions, they will produce a large “year class” of young fish. With striped bass, above-average year classes have been particularly important for overall abundance.

But the significance of crossing that threshold is less clear. In fishery management, such thresholds are typically a biologically established minimum. Falling below that number risks a stock crash.

In the case of striped bass, the spawning stock biomass is not set at a danger level. Rather, it is set at its 1995 level, when the stock was declared recovered by ASMFC. It is about 12 times higher than the population’s low point in the early 1980s.

The higher threshold, fishery managers say, reflects the fact that striped bass are considered a marquee species both in the Bay and along the coast.

As a result, O’Connell and some other fishery managers say, the question is not whether something should be done, but rather how much – and how quickly.

While reproduction in most recent years has been low, the 2011 year class was the fourth strongest since Maryland’s Young-of-Year index began in 1956. Those fish will soon reach catchable size – 18 inches – in the Bay, and will shortly thereafter migrate to coastal waters where they typically need to be larger before they can be caught.

“If we did nothing, but we kept fishing mortality at the current level, we would probably see that population come back up, but it may take three, four, five, six years,” O’Connell said.

“We should react, because the management plan and the stakeholders prefer that this species be at a higher abundance level,” he said. But, he added, “we don’t have to react in one year.”

Some recreational anglers, like Friedrich, worry that delaying or spreading out cuts only delays the potential comeback. Friedrich also contended that managers are putting too much stock on the 2011 year class which, he said “are about to go into the meat grinder” as they hit legal catch sizes in the Bay and along the coast.

“That 2011 class is where all the fishing pressure is going to fall,” he said. “It may be the most pressured year class in history.”

But sharp, single-year cutbacks would hit the commercial fishery hard, particularly in the Bay: Maryland and Virginia have the highest commercial quotas of East Coast states.

“In one year, that would be devastating,” said Bull, the VMRC commissioner. “I believe that it is very important, for the commercial fishery here in Virginia, to phase in the impact.”

Fishery managers from the Bay states also contend that new regulations could unfairly hit the Chesapeake.

After spawning, the Bay serves as a nursery for striped bass before they migrate to the coast. Fishery managers say females – which make up the spawning stock – leave the Bay earlier than males, so most of the Bay catch consists of male fish. Sharply reducing the catch on those males does little to boost spawning stock biomass, they say.

For years, harvest levels for striped bass in the Chesapeake were set separately from those along the coast. That was reflected in 2013, fishery managers said, when catch limits in the Bay were 14 percent below those in 2012, reflecting a decline in larger fish in the Bay.

But after a recent stock assessment, the ASMFC failed to set a Bay specific target, citing a lack of adequate information, even as it acknowledged differences between the Bay and coastal stocks.

If the Chesapeake is subjected to the same across-the-board reduction as the rest of the coast, managers say, it will not only hurt the fishing industry, but provide little benefit to the spawning stock.

“It is really misleading to the public to think that this level of reduction in the Chesapeake Bay is going to rebuild the female spawning stock biomass, because our fishery is predominantly males outside the spring trophy season,” O’Connell said.