Today’s feature, on efforts to restore shortnose and Atlantic sturgeon in Connecticut, comes to us from NOAA.
from The Fishing Wire 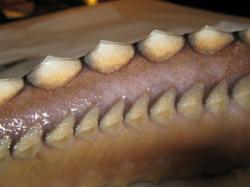 Closeup of sturgeon scutes. Remarkable scales on the sturgeon’s back protects like a suit of armor. Photo credit: NOAA Fisheries

Sturgeon in the Connecticut River

Poor water quality remains a continued threat to sturgeon health on the Connecticut River. Sewage outflow, Polychlorinated Biphenyls (PCBs), and coal tar deposits, are the types of contaminants most prevalent in the river. Another major threat is dams. 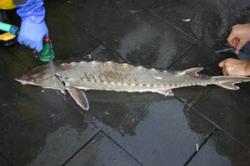 Even though sturgeon are remarkable jumpers, the Holyoke Dam, built in 1869, is 30-foot high and poses a significant barrier between the fish that reside upstream and those below the dam. This is of particular concern because the primary spawning areas for shortnose sturgeon in the Connecticut River lie upstream in the Turners Falls region. The limited exchange between these two areas is hindering population recovery on the river. The Holyoke Dam is not a complete barrier to fish passage. There is a fish ladder that lets some fish move upstream or downstream. However, some sturgeon have trouble finding the fish ladder when trying to move upstream or are injured by turbines when they pass through the power generating units as they head downstream.

Turners Falls and Cabot Station hydroelectric facility are located at a natural falls. This is thought to be the upstream extent of the range of shortnose sturgeon in the Connecticut River. Facility operations change the natural river flow – both how much water is available and how fast it flows. Irregular flows and water that flows too slowly or too fast, affect the ability of shortnose sturgeon to spawn and for their eggs and larvae to develop successfully. 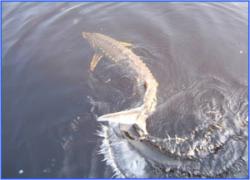 Federal agencies, in this case the Federal Energy Regulatory Commission, must consult with NOAA Fisheries if they plan to conduct projects or allow activities that could potentially affect a listed marine or anadromous species’ long-term survival or habitat. At the end of these consultations, NOAA Fisheries issues a Biological Opinion. Biological Opinions often include recommendations and requirements to minimize or, if possible, remove risks to both habitat and the long-term survival of the listed species. The goal is to allow activities and projects to move forward, but to do so in a manner that still protects vulnerable species.

We’ve been collaborating with the Federal Energy Regulatory Commission on studies to examine the impact of the Turners Falls/Cabot facility operations. We are interested in learning more about how facility operations may impact spawning and development of early life stages. With the help of various partners, we are also making sure that the studies being conducted are done in such a way to minimize potential impacts on sturgeon. If we determine there is a risk to sturgeon from the continued operations of this facility, we will conduct a formal consultation. 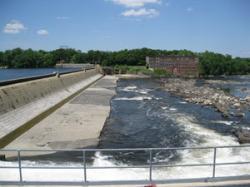 Holyoke Dam on the Connecticut River

For many years, we also have been actively working to improve fish passage at the Holyoke facility. In 2000, we concluded that the ongoing operation of the facility was likely to jeopardize the continued existence of shortnose sturgeon. Based on a subsequent settlement agreement, the dam owner is now required to make major changes to the fishways to improve the ability of shortnose sturgeon to pass upstream of the dam and to provide safe passage downstream. Once work is complete, the lower river population should be able to complete their spawning run to the Turners Region and upstream fish should be able to migrate to rich foraging areas in the estuary.

We also have supported lab work to study

movement and behavior of early life stages and juveniles;
spawning behavior;
use of a prototype fish ladder that was designed specifically for sturgeon because they have trouble navigating up commonly used fish ladders; and
the reactions and behaviors of downstream migrants as they encounter obstacles, so we can make it easier for them to continue their movements unimpeded.

We developed an educational/outreach program about sturgeon called SCUTES (Students Collaborating to Undertake Tracking Efforts for Sturgeon). The SCUTES program is an initiative that involves NOAA Fisheries staff, students, teachers, and sturgeon researchers working together to learn more about the movements, behavior, and threats to shortnose and Atlantic sturgeon. We collaborate with various informal education centers along the East Coast of the United States to provide schools with sturgeon educational kits that are available on loan.

The SCUTES program also works with sturgeon researchers to provide sturgeon tracking data for teachers to use in the classroom as part of the Adopt-a-Sturgeon program. Our staff also regularly give talks about sturgeon at local New England classrooms. This fall, the SCUTES team plans to reach out to teachers in western Massachusetts and provide permanent educational kits to the Great Falls Discovery Center in Turners Falls, MA.

We remain committed to working with our partners to ensure the recovery of shortnose sturgeon both in the Connecticut River and throughout its full range. We are hopeful that with continued progress at addressing the primary threats on this river, shortnose sturgeon can increase in abundance as they have in other river systems.

Prehistoric looking with five rows of bony scutes1 along the length of its body
Vacuum-like mouth, used to suck in food because it doesn’t have teeth
Tail similar in appearance to a shark tail
An “anadromous fish,” migrating between freshwater for spawning and saltwater for feeding
Found in major rivers, estuaries, bays and coastal waters along the eastern seaboard of the United States and into Canada.

1. Sturgeons have five rows of bony scutes along the length of their body. Scutes are a modified scale. They can help serve as protection for the fish like armor and make sturgeon distinct from other fish.