By Chris Wood, President
Trout Unlimited
from The Fishing Wire 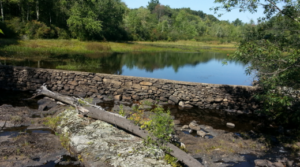 Last week, I saw a video celebrating the removal of the Tack Factory Dam on Third Herring Brook in Massachusetts. Like all dam removals, it involved many partners especially the North and South Rivers Watershed Association, local TU chapters, the MA/RI Council, NOAA, and Steve Hurley of the Massachusetts Division of Fisheries and Wildlife, an unsung hero in the effort to protect salter brook trout—a unique form of brook trout that often occupy saltwater habitat.

What makes the story of what happened on Third Herring Brook so cool is its now commonplace nature. Rivers in the East are riddled with dams that were built for long-forgotten purposes. Some dams are important for power generation or flood control. Some make awesome tailwater fisheries for wild trout. But many are deadbeats, liabilities for their owners—serving only to to pond water, warm streams, and block passage for migrating fish.

Ten years ago, I remember walking along the Musconetcong River in New Jersey, and looking at a dam adjacent to a restaurant, and asking Agust Gudmundsson, then the New Jersey council chair, “what is the dam for?” He said, “who knows? That’s why it is coming down.”

Most TU members and supporters are aware of TU’s role in re-opening over 1100 miles of the Penobscot River in Maine, and our contributions to reopen more than 500 miles of the Klamath River on the California and Oregon border. Across the eastern United States, TU, and its chapters, councils, and partners, have become quietly expert in working together to remove old and obsolete dams. This work is particularly vital as trout and salmon need to move in response to flood, fire, and drought. Dams also block access for spawning and rearing habitat for trout and salmon.

The Squanatissit and Boston chapters removed a dam on the Nissittissit River, a gorgeous trout stream that flows into the, once blighted but now cleaned up, Nashua River. The Nor’east chapter is working on dam removals on the Shawsheen and the Ipswich Rivers.

On the Boardman River TU is working with an array of partners on a series of dam removals that will reconnect over 160 miles of rivers and streams.

In the Adirondacks, the Lake Champlain chapter is working with the Tri-Lakes chapter and using funding from a variety of sources, including Embrace A Stream to remove the Quarry Dam, which will open the upper West Branch of the Ausable to spawning and as a summer refuge.

TU removed a dam, and is replacing two culverts on Kinne Brook in Massachusetts— an area that TU scientists call a brook trout portfolio stronghold.

In Pennsylvania, we worked with American Rivers to remove an old stone dam and open up nearly 100 miles of ChestCreek, a priority for native brook trout recovery.

My favorite dam removal story comes from the Sebago Chapter in Maine. They worked with several other chapters, the Nature Conservancy, and others to remove the Swett Brook Dam in 2013. The chapter then set a goal to remove at least one dam or culvert that blocks fish passage every year through 2020!

Every one of these dam removals, and the dozens more that are happening around the nation, share a common theme—local people working together to improve the places they fish, live and love. The same combination of pluck, ingenuity, and smarts that led us to build dams to allow a young nation to prosper are helping to remove them today, and we are a richer country for it.

Chris Wood is the president and CEO of Trout Unlimited. He lives in Washington, D.C., and works from TU’s Arlington, Va., headquarters.