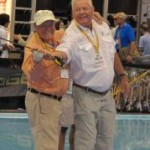 From The Fishing Wire Editor’s Note: During ICAST, Etta Pettijohn, J.R. Absher and I received a rare treat: nearly 90 uninterrupted minutes of conversation with “Lefty” Kreh. While J.R. and I were fortunate enough to be interlopers, Etta’s telling of the story allows you to share the conversation as well. Enjoy!

Many Outdoor Wire readers know Bernard “Lefty” Kreh as the legendary man who changed the fly fishing world with his casting techniques, and as the man who taught countless anglers to fish for saltwater species on TV and through his newspaper and magazine articles and books.

He invented a saltwater fly called “Lefty’s Deceiver,” which is so famous that no saltwater fly box is without one, and the U.S. Postal Service has featured it on a stamp. He has been inducted into three fishing halls of fame.

Millions have developed a love of fly fishing reading his work and watching him, and when his book “Fly Fishing in Saltwater” appeared in 1974, he became a worldwide phenomenon. At least two books have been written about him, and he penned an autobiography, “My Life Was This Big: And Other True Fishing Tales.”

He is largely responsible for the development of modern light-tackle, big game fly fishing, and his name is revered among fly anglers across the globe. He has spent an impressive number of decades as a journalist for the St. Petersburg Times, Baltimore Sun, and other publications.

But there is much more to this unpretentious man with a perpetual smile and quick joke.

The 88 year-old Kreh was born in Frederick, Md., during the Great Depression. His father died in 1932, leaving his mother with four children, him being the oldest at age six. Back then, said Kreh, there was no actual money involved, but “They (government) put us in public housing in the ghetto.”

“My mother was a proud woman,” said Kreh. “But she had no choice.” He said some childhood friends in the ghetto nicknamed him “Lefty” because he played sports left-handed.

“When I became a teenager my mother told me I could go to high school if I could find a way to make money for clothes and shoes,” said Kreh.

He found a way – fishing a nearby river, limb-lining for catfish.
“At night I’d push myself along the bushes on a makeshift pole boat, using a coal oil lantern for light. I sold catfish at the local market for 10 cents a pound, and I was a ‘fat cat,'” he laughed.

Kreh speaks proudly about his brothers and sister, who all went on to achieve remarkable success in their lives and careers.

When WWII was underway he volunteered to serve at 17 years of age. He ended up as a forward observer in the Battle of the Bulge and was at the Elbe River in Germany where the Russian and Americans first joined together to drive back the Nazis. Along the way his unit, the U.S. Army’s 69th Artillery Division, earned the distinction of being tough, as he and his comrades liberated a concentration camp, fighting battles pivotal to the allied victory.

After returning to the U.S. he, in his own words, marked his greatest achievement, by marrying Evelyn, his wife and best friend for more than 60 years. They had two children together and Kreh said above all they were best friends. She passed away in 2011.

In 1948 Kreh worked at Fort Detrick, where the military kept biological weapons like Anthrax. When his biohazard suit leaked and he was hospitalized, Kreh spent a month in isolation for exposure to the deadly virus, and today there is a strain named for him, called BVK-1. In 2011, after terrorists attacked the World Trade Center and the Pentagon, killing about 3,000 people in one day, someone mailed the Anthrax virus to a newspaper publisher in Florida and others, proving fatal. At that time the New York Times wrote an article mentioning Kreh as the only person to have survived such exposure.

“Millions of men came home with a guarantee of home ownership, and more money to spend on leisure activities, where before most people rented, and the disparity between rich and poor, and those with or without property, was greater. More people were fishing, hunting and traveling and reading about these.”

He liked to fish, and secured a job as an outdoor columnist for his local newspaper, and a few years later was syndicated in almost a dozen newspapers. His marksmanship abilities led to a Remington Arms Company contract as a shooting showman, when he would routinely shoot an aspirin out of the air at events and promotions.

In 1947, Joe Brooks, the fishing editor for Outdoor Life, brought his fly rod to fish for bass with Kreh in a nearby fishery. Brooks pulled in as many bass as Kreh, who was using a plug-casting outfit, turning Lefty to fly fishing for good.

The next decade he began experimenting with flies for striped bass in saltwater, and thus invented Lefty’s Deceiver, a big heavy lure for long casts. In addition, his reporting in magazine and newspapers, about saltwater fly fishing was turning millions of people onto the relatively new sport that was traditionally achieved with baitcasting equipment.

“I am always learning,” he said. “Adversity makes you think harder about what you are doing, and I love to solve problems. I try to share my knowledge of fishing and am deeply concerned whether or not I am making my advice clear and understandable.”

Indeed, his instructional writing and casting lessons are what have led many thousands to pick up their first fly rod, as he makes it less mysterious to the novice.

He’s been doing it for decades, but every minute of one-on-one instruction from Kreh makes you a better fisherman- and person. J.R. Absher photo.
In 1950, five days after the U.S. sanctioned Cuban government fell to revolutionaries led by Fidel Castro, Lefty said he went fishing with the Cuban leader.

“Ev (wife Evelyn) almost had a cardiac arrest,” he said. “(Cuban president) Batista left with all the money in the treasury,” said Kreh. “So Castro paid Joe (Brooks) to send outdoor writers to Cuba to advertise the good fishing there.”

Kreh, while fishing with Hemingway, winner of the Pulitzer Prize for Literature and author of The Old Man and the Sea, once asked him, “What is good writing?”

Kreh continues to travel, giving casting seminars and promoting water and fish species conservation. He represents many tackle companies and has equipment named after him.

Despite his advanced age, Kreh is always willing to stop and show someone at a trade show his casting technique, or share his life story with an admirer. And there always seems to be a long line of such admirers wherever you find Lefty. One can’t spend time with Kreh without laughing, listening and admiring the man.

Indeed his life looms large, like title of his autobiography, and if kindness, brilliance, attitude and achievement count, his life is tantamount to a world record.