There are dozens of books on the subject of tying knots and hundreds of knot variations – some basic and some for special purposes. Some are easy to tie. Others are so complex you could go through a spool of line just trying to get it right sitting at a table; and then you have to duplicate it when you’re on the water. Trying to memorize techniques for tying a bunch of different knots is confusing. That confusion can lead to mistakes and ultimately knot failure.

Any knot that is poorly tied can slip or cut into the line causing a failure under considerably less pressure than the breaking strength of the line. When a knot fails, fish get away and all that’s left is a curl at the end of the line and a sinking feeling that the fish was lost due to angler error.

There’s a simple knot that typically tests out to 90 percent or better than the breaking strength of the line and is capable of handling a wide variety of connections. It’s actually more then just a knot; it’s a knot system, and once you get a little practice, it’s easy enough to tie in the dark. It is appropriately called the Uni-Knot.

In its most basic form, the Uni-knot is excellent for connecting snaps, swivels and lures, and pretty much any kind of terminal tackle, using monofilament, fluorocarbon and even most braided lines of any pound test. The drawing shows how the knot is wrapped, but here’s how to tie it in detail. 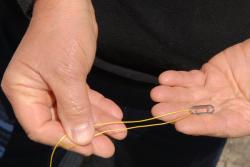 Picture 1: Start by running about 12 inches of line through whatever you’re tying on and put it in your hand like this. 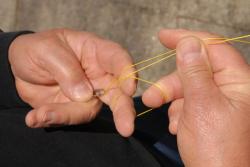 Picture 2: Bring the two segments of the line parallel and create a loop around your pointer and middle fingers. 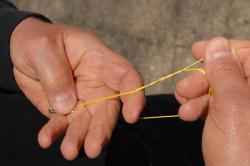 Picture 3: Wrap the tag end of the line through the loop and around both standing lines at least five times. When using braid, increase the number of wraps to six or seven. 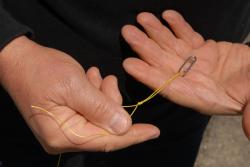 Picture 4: Slowly pull on the tag end until the knot cinches up, but don’t pull it tight. 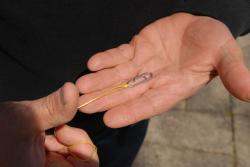 Picture 5: Wet the knot and pull firmly on the standing line until the knot slides into place and tightens around the eye. Then clip off the excess tag.

Practice it at home and you will be able to tie it in 15 seconds or less, even on a rocking boat. This knot is the foundation for several other knots, making it the most versatile fishing knot you can learn.

Some lures, like jigs, work better when attached using a loop knot. The loose connection allows the lure to swing more freely at the end of the line. Nothing could be easier than using a Uni-Knot for this purpose. Tie the knot exactly the same way, but do not cinch it down to the eye of the lure. Leave it an inch or two away and using a pair of pliers, pull the tag end of the knot very tight to lock it in place.

Bait hooks with offset eyes are designed to be attached using a snell. This type of attachment allows for a straight pull from the line to set the hook. The Uni-knot can be used for this purpose and doesn’t require you to learn a totally new knot. Simply pass the line through the eye of the hook, make a loop with the tag end, and make the five wraps around the line and the shank of the hook. Then pull the tag end, wet the knot, and complete the knot by pulling on the standing line.

There are many occasions where an angler has to join two pieces of line together. Adding a heavier shock leader to your running line and connecting a length of fluorocarbon or monofilament to the end of braided line ensure the fish won’t see the line connected to your bait or lure. With a Uni-to-Uni connection, it doesn’t matter if the lines are of different types or vastly different diameters. All you do is place the two lines alongside each other, and tie a basic Uni-Knot in one, cinching it up lightly, then turn them around and tie another Uni-Knot in the other exactly the same way. Wet both knots and pull firmly on both standing lines until the two knots come together. A final hard pull seats them together for a strong connection.