Collegiate Bass Fishing is on a Roll 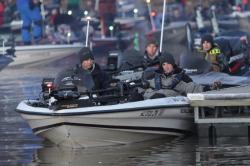 Collegiate bass fishing may never approach the interest levels generated by college football, but there’s evidence that competitive angling is following the footsteps of other popular NCAA sports as more and more colleges around the southeast add tournament fishing teams to their rosters, and a few even offer scholarships to attract young anglers who have already proven their skills competing at the high school level.

The Bassmaster College Series Southern Regional, fished this past week at Lake Martin in central Alabama, drew an amazing field of 225 boats, one of the largest fields at any level ever attracted by a B.A.S.S. event, and by far the largest college event.

“The College Series tournaments have seen growth each year,” said Hank Weldon, senior manager of the college, high school and youth tournament series at B.A.S.S., which is headquartered in Birmingham. “But this year’s field is more than 80 percent higher than the 124-boat field we had at last year’s Southern Regional. This surpassed any of our expectations and is a clear indication of how desirable the Carhartt Bassmaster College Series is.”

Most of the young anglers competing in the college events got their start in high-school level competitions, which are also booming around the nation. B.A.S.S. coordinated high school events are now available in every state except North Dakota, and there’s even a team in South Africa. (For information on starting a high school bass fishing club, contact the Alabama state director, Darrel High at highdar@aubrun.edu, 334-707-7355. Full information on high school events nationwide is available at http://www.bassmaster.com/high-school .)

The high school events have become a bit of a proving ground for young anglers, just as high school ball sports are for NCAA competition. B.A.S.S. has set up an All-American program that honors the top young anglers not only for their success in competition, but also for their character, leadership, and maintaining solid grades–a 2.5 average on a 4-point scale is required. Nominations are accepted from coaches, school administrators and parents, with the open period this year continuing through Feb. 15.

Dave Precht, Editor in Chief of Bassmaster Magazine and Vice President of Publications for B.A.S.S., said there was a pent up desire for a college level circuit.

“Once a few states made it a team sport and high schools started offering fishing clubs, it grew itself naturally into college teams,” said Precht. “It’s a great opportunity for young men and women to get out in the outdoors with people of their own age and compete in a sport they can follow their whole lives, and just like in athletics, a select few will make it on to the ranks of the pros.”

He said several former All American high school competitors have quickly advanced through the college and regional tournament circuits to become members of the Elite Tour, generally recognized as the NFL of bass fishing, where a few of the most successful anglers earn six-figure incomes.

“Bringing these young people in is also good for the industry,” says Precht. “It results in boat and tackle sales, and for the ones that go on to the pro level, they become great spokesmen for their sponsors. They’re well educated, well-spoken and some of them have marketing or business degrees that let them step right into the industry.”

For more information on the College Series, visit Bassmaster at http://www.bassmaster.com/college