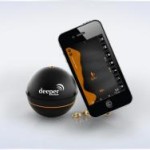 Sonar you can cast

We get an remarkable assortment of information on amazing new goodies to make your fishing better, sometimes dozens in a day, but one that caught our eye recently was the “Deeper” castable sonar-a tennis-ball sized depth-finder you can carry with you anywhere, reading the data on your smartphone or tablet. The rig has some interesting possibilities.

The “Deeper” transducer is encased in a composite ball and weighs 100 grams-3.5 ounces. Where ever the Deeper sonar unit lands or drifts, it reads water depth and temperature, and also marks fish suspended off bottom as well as structure.

It sends this via Bluetooth wireless to your properly-equipped Apple or Android phone or tablet with the free downloadable app which also gives moon phases, air temp, solunar “best times”, Internet sharing of fish photos and other useful tools and info.

It reads to depths of 130 feet and has a Bluetooth range of about 150 feet. It has three line-ties so that you can cast it, troll it or lower it straight down from a dock, bridge or pier.

For kayak and canoe anglers, wade fishermen, shore anglers and bridge and pier anglers, the “Deeper” could be a big help. If you can drift your bait down that break line on every cast, it gives a huge advantage in many areas. You could also use them to avoid brushy snags. Plus, you don’t need a hookup to a 12-volt power source.

You can also probe the depth around a weedbed or dock without actually running your boat close to it and spooking the fish.

And there are some neat new mounts from RAM (www.rammount.com) and other companies for both cell phones and tablets used on kayaks and other small boats.

The Deeper system runs on a rechargeable lithium battery that functions for about 6 hours straight between recharges. The housing is watertight to 1 meter and shock-resistant. The system works with most phones and tablets, but be sure to see their website for compatibility. Price is $229. For details, visit www.buydeeper.com.