Try this Simple Solution for Barotrauma in Fish 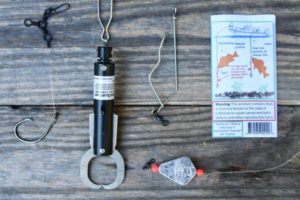 Recently on the blog we looked at a few misconceptions surrounding barotrauma, which occurs when fish reeled in from deep waters experience injuries due to the rapid change in pressure. Barotrauma, which can range from invisible injuries to bloated organs, can kill fish both directly and indirectly, as when they’re unable to escape predators such as sharks or barracudas.

There’s increasing consensus that descending devices are the best way to address this issue, giving released reef fish the greatest odds of survival.

Descending devices can range from the low-tech and DIY (a simple hook or basket set-up with a weight attached) to more expensive, commercially developed tools. But all serve the same purpose: to return fish to a safe depth where they can recover from any ill effects of barotrauma. The use of all descending devices follows the same basic procedure:

Angler reels in a fish from >30 feet of water and may or may not observe signs of barotrauma in the fish.

After deciding to release fish, angler works quickly to dehook the animal.

Angler attaches descending device to fish (either through the hole made by hook, by attaching to lip, or by placing fish in a basket).

Using a hand reel or heavy-duty rod, angler lowers fish back into the depths from which it was caught.

Angler triggers the release mechanism, freeing the descending device from the fish so it can re-acclimate to its environment.

In 2015, the FishAmerica Foundation began working with anglers in the Gulf of Mexico to improve the survival of fish caught in deep waters (such as red snapper) and learn more about the potential for widespread use of descending devices. By asking over 1,100 anglers to test Seaqualizer descending devices, the project ‘saved’ an estimated 3,000-9,000 red snapper that, based on previous research, would otherwise have died due to their barotrauma injuries.

Based on their early success in the Gulf, the FishSmart project has now expanded to look at the impacts of using descending devices by offshore anglers in the South Atlantic. That’s how the South Carolina Department of Natural Resources (SCDNR) came to be a partner on this project.

An Opportunity to Try This Yourself Right now, SCDNR is recruiting volunteer anglers who regularly fish for species such as snapper, grouper, or red drum in deep waters. If you’re an offshore angler who cares about improving the survival of reef fish, consider taking part in this program. Anglers who participate in the program will be provided with educational materials and tools for decreasing barotrauma effects, and will be asked to complete two brief surveys over the coming year about how often they used descending devices, how they worked, and whether they have any recommendations for improvement on provided information.If you’re interested in helping conserve deepwater fish by participating in this program, please contact SCDNR’s Morgan Hart at HartM@dnr.sc.gov.