A Fishing Hideaway on Tampa Bay
By Frank Sargeant, Editor
from The Fishing Wire 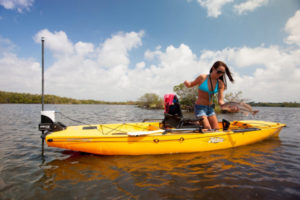 It’s no secret that Florida is being overwhelmed by new residents—the population now approaches 22 million—as well as by the 124 million who visit there annually. Roads are jammed, housing developments are gobbling up thousands of acres of natural habitat each year and finding locations where you can “get away from it all” is growing way more difficult.

As the song goes, we have paved paradise and put up a parking lot.

But there are still a few hideaways left that reflect a time when this state truly was a natural paradise and the weather, let’s face it, is unbeatable, especially when the snow flies up north. I was reminded of that by a visit back to Tampa Bay’s South Shore region not too long ago.

The South Shore, stretching down the southeast side of Tampa Bay roughly from the town of Apollo Beach to Terra Ceia, has no white sand beaches and no emerald green sea, and that is essentially what has saved it so far.

It’s a land of coastal creeks and estuaries, mangrove and saltmarsh shores, and through the heart of it runs the appropriately-named Little Manatee River, a designated “Outstanding Florida Water” that is home not only to lots of manatees, but also plenty of snook, redfish, tarpon, largemouth bass, alligators, otters, bald eagles and a bit of everything else that used to make Florida, Florida. There are three state aquatic preserves here—the wild lands and estuaries will remain that way, permanently.

As with most areas where there’s good habitat, the fish and wildlife thrive here; the South Shore is one of the premiere fishing areas on all of Florida’s west coast. It’s home to the “big four” of Florida inshore fishing, snook, tarpon, trout and redfish, sometimes in amazing numbers. And it’s far enough inland that it was minimally affected by the long-lasting red tide that devastated many coastal areas last year.

Because it’s Florida, there’s good fishing every month of the year, though the mix of species and their locations change with the seasons. Tarpon and snook are primarily tropical fish and action for them is best April through October, while trout and redfish like cooler water—best times are typically October to March, though spawning reds sometimes make a push in late August and September.

This is all inshore action, which means you can get at the fish in a skiff, a bassboat, even a kayak if you keep an eye on the weather. And if you don’t have your own boat, there are rentals available.

At Little Harbor Watersports in Ruskin, for example, you can rent a center console for $225 for a half day, $325 for a full day, and head out on the bay with a very good shot at catching plenty of spotted sea trout, simply by drifting over grass flats at depths of 4 to 10 feet and bouncing a quarter-ounce shrimp-tail jig on bottom or drifting along with a DOA Shrimp (or a live shrimp) suspended 3 feet under a popping cork that you give an occasional “chug” to stir up interest. You’ll catch plenty of ladyfish, black sea bass and assorted other critters to keep up your interest, as well.

Another alternative is to rent a kayak at Little Harbor and explore the canals that lead back into the development. In winter, these canals are sometimes loaded with redfish, trout and the occasional snook, while in summer they are home to baby tarpon anywhere from 1 to 3 feet long. (It can be buggy back here on a calm summer morning, though—load up with high-DEET repellent.)

Snook can be a challenge to locate and catch, but there are lots of them in the South Shore area and those who fish live sardines regularly connect with big ones.

If you’re more serious about fishing, you can hire a guide—rates around $500 for two–who will put you on the area’s premier gamefish, the snook. These fish have been described as “largemouth bass on steroids” (by me, among others) and they really put on a show in the mangrove creeks and oystery potholes where they’re often found. Size ranges from 3 pounds upward . . . way upward. It’s not uncommon to hook up with a fish weighing 10 to 15 pounds while fishing with a guide who uses live sardines to fool the lunkers, and trying to control one of these beasts in the confines of a narrow creek overhung with mangrove trees and surrounded by sharp oyster shells is the angling experience of a lifetime.

Or, if you’re into big game fishing, you can also enjoy that experience without ever leaving sight of shore here—from late April through October, South Shore waters are loaded with tarpon ranging in weight from 50 to 150 pounds. You might get lucky and connect with one on your own by fishing deep bends in the river or in the canals around Little Harbor (fish where you see them rolling with live pinfish or sardines) but best bet is to hire a guide, who will know where the schools are hanging out, usually south of the river.

Jumbo tarpon are abundant in Tampa Bay from April through October, including lots of fish weighing 100 pounds and up. Best way to connect is to hire a guide, who has the right gear and knows where to find them. (Frank Sargeant Photo)
You can catch the juvenile tarpon on heavy bass tackle in the rivers, but for the adults, heavy spinning gear and 50-pound-test braid is the minimum—your guide will have the appropriate gear, and will also take the worry out of handling one of these silver giants at boatside. (Tarpon are a catch-and-release species, but you’ll have a chance for plenty of photos with your trophy before she swims away free to fight again.) One of my favorite guides for this pursuit is Captain Chet Jennings, who has been at it for decades. His website also has some interesting video showing the backcountry here; www.fishintampa.com.

Accommodations on the river are understandably scarce—the terrain and environmental regulations limit development beyond basic residential properties—but one first-class location is Harborside Suites, at Little Harbor just north of where the Little Manatee runs into Tampa Bay.

Little Harbor is a good home base for a South Shore visit not only because it’s in the heart of some of Tampa Bay’s best fishing, but also because it’s got all the amenities to keep the rest of the family happy while you fish. Tennis courts, swimming pools, fitness centers, several waterfront restaurants, hiking areas, SUP, kayak and jet ski rentals plus a half-mile of sand beach should keep the crew well entertained.

The live music at the Tiki Bar overlooking the bay is a big draw at sundown every evening, and if you’re so inclined they even have karaoke nights on occasion. There’s also a waterfront firepit for after-sundown partying. And the waterfront rooms all have full kitchenettes, equipped right down to that all important coffee maker.

Sundowns at Little Harbor are not only beautiful, but they mark a good time to slip out on the water for a few casts — there’s always a bite at sunrise and sunset. (Frank Sargeant Photo)
It’s not uncommon for manatees to swim right into the harbor in front of the resort and nibble at moss on the boat fenders, and on my last visit a mother bottle-nosed dolphin was training her offspring to catch mullet among the docked yachts, as well. If you’re into bird watching, there’s a large preserve less than a mile down the shore where you’ll see just about every shorebird Florida has to offer, including the strikingly pink roseate spoonbills, sometimes by the dozens, plus lots of ospreys, egrets, great blue herons and in winter the occasional bald eagle.