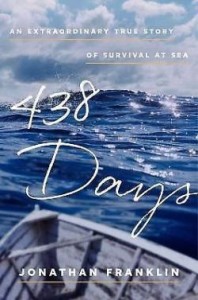 Most of us who spend time at sea like stories of sea survival—you always have it in the back of your mind that it could happen to you, someday, if the stars aligned just so. One of the more intriguing is detailed in the book “438 Days” by Jonathan Franklin, the story of Salvador Alvarenga’s incredible survival while drifting some 9,000 miles across the Pacific, from the coast of Mexico to the Marshall Islands.

The writing is a bit choppy and interspersed with information that’s interesting regarding survival, but that breaks the mood of the story, and yet I found the book a compelling read—I finished it in three nights, which is fast for me. For those who thought, when this story broke in the news in 2014, that it described an impossible feat–that somehow the fix was in–this book and the photos included should allay those suspicions. Here’s the gist of it:

On November 17, 2012, Salvador Alvarenga left the coast of Mexico for a two-day fishing trip. A vicious storm killed his engine and the current dragged his boat out to sea. The storm picked up and blasted him west. When he washed ashore on January 29, 2014, he had arrived in the Marshall Islands, 9,000 miles away—equivalent to traveling from New York to Moscow round trip.

For fourteen months, Alvarenga survived constant shark attacks. He learned to catch fish and birds with his bare hands. He built a fish net from a pair of empty plastic bottles. Taking apart the outboard motor, he fashioned a huge fishhook. Using fish vertebrae as needles, he stitched together his own clothes.

He considered suicide on multiple occasions—including offering himself up to a pack of sharks. But Alvarenga never failed to invent an alternative reality. He developed a method of survival that kept his body and mind intact long enough for the Pacific Ocean to toss him up on a remote palm-studded island, where he was saved by a local couple living alone in their own Pacific Island paradise.

Based on dozens of hours of interviews with Alvarenga and interviews with his colleagues, search and rescue officials, the medical team that saved his life and the remote islanders who nursed him back to health, this epic tale of survival by Jonathan Franklin is a true version of the fictional Life of Pi. With illustrations, maps, and photographs throughout, 438 Days is a study of the resilience, will, ingenuity, and determination required for one man to survive fourteen months, lost at sea. List price is $26.00, from Atria Books, less on www.amazon.com. 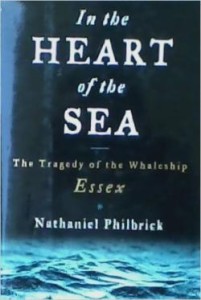 In the Heart of the Sea

Also in this vein, I recently read “In the Heart of the Sea” by Nathaniel Philbrick, which has been around for a while, but was recently released as a major motion picture. This is also a story of sea survival, based on the story of the whale ship Essex out of Nantucket in 1819.

The Essex was rammed by a giant sperm whale far off the coast of South America and sank, leaving 20 men in three small whaleboats. (Yes, the tale was the basis for Herman Melville’s Moby Dick, written in 1851.)

Over the next three months, the men sailed all over the South Pacific, frequently driven in the wrong direction by prevailing winds, storms and currents. As their food disappeared, they turned to cannibalism, first of those who died from duress, and later by drawing straws and killing each other so that a few might survive. In the end, only eight were left, including two who were found in one of the surviving boats sucking on the bones of their deceased shipmates.

It’s a fascinating look at survival, at the limits of human endurance, and at the historic whaling industry. It’s from Penguin books, and available on www.amazon.com.