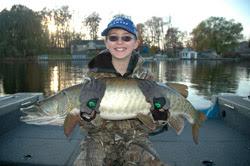 Catching a big muskie will put a smile on your face.

Michigan’s Great Lakes muskellunge are most common in Lake St. Clair and the Detroit River, which feature world-class fisheries for the large, toothy predators. Lake St. Clair has a fairly large fleet of charter boats that target muskellunge by trolling, and a growing contingent of small boat anglers that cast or jig for them as well. Because the St. Clair system is fed by cold, Great Lakes water, the muskellunge season does not open until the first Saturday of June and runs through Dec. 15. Photo of muskie lures This season is being considered in other locations where muskellunge spawning occurs in May and June. Elsewhere, the fishing seasons mimic walleye seasons.

Often called “the fish of a thousand casts,” muskellunges are hard to come by; they are slow to mature and take many years to reach the minimum legal size of 42 inches. Legal-sized muskellunge are rarely caught by anglers who are not fishing specifically for them; Man with muskybecause of their large size and sharp teeth, they often break lines. Usually found with shallow weedy lakes and rivers with log jams and fallen timber, muskellunge retreat into deeper water during the heat of the summer. They can be caught by casting or trolling with very large plugs, spoons and spinners — usually behind a wire leader — that are retrieved or trolled at a fast rate or by bait anglers using large suckers. Though primarily fish eaters, muskellunge will take waterfowl or rodents when available.

While muskellunge can be taken by hook and line or spearing, there are special regulations on a number of inland lakes. Lake Hudson in Lenawee County, Thornapple Lake in Barry County, and Big Bear Lake in Otsego County are the state’s brood stock lakes and are closed to spearing.