Stirring bass out of their lethargy when water temperature is in the low 40’s, as it is now across much of open-water territory in the south and west, can be a challenge, no doubt about it. But making use of the fast-sinking lures known as lipless crankbaits or sometimes as “rattle-baits” because all have some sort of metallic beads inside to produce noise is one proven tactic that consistently produces. 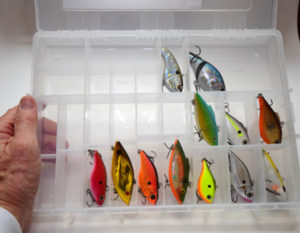 Rattlebaits Picture from The Fishing Wire

The lures sink as fast as jigs or weighted plastic worms, but can be fished considerably faster, and the noise they generate seems to wake up the fish in a way that others do not in cold water.

Among the many versions is the Cordell Spot, perhaps the original, and the Bill Lewis Rat-L-Trap, now the most widely-known and used. Other good ones include the Strike King Redeye Shad, Rapala Rippin Rap, Yo-Zuri Vibe, X-Calibur Xr 50 and many more.

The lures suitable for bass fishing weigh anywhere from 1/4 to 1 ounce, with the heavier ones usually preferred for winter fishing because they stay deeper when activated.

The lipless lures go through the scattered grass left by winter’s cold easily in most cases despite their treble hooks. In fact, the favored fishing tactic at this time of year is to find scattered grass in 8 to 12 feet of water and fish the lures with a sort of lift-and-drop retrieve that is somewhat similar to fishing a jig.

The lure is allowed to sink to bottom, then pulled upward with the rod 2 to 3 feet, which causes it to vibrate and activate the rattles inside. It’s then allowed to flutter back toward bottom. The strike often comes on this drop, much like in vertical jigging. (It requires a finger on the line and a sensitive rod to sense the bite many times, since it’s only a light tap.)

Experts in the tactic say it simulates a cold stunned shad trying to maintain equilibrium. When the bite comes, the hooks are set and it’s game on.

To be sure, the lures frequently pick up dead grass, but this can often be felt as the action of the lure stops, and can sometimes be cleared by “ripping” the lure upward very hard for a pull or two before going back to the lift and drop retrieve.

Best locations are often on the edge of submerged creek channels, where the dead grass stands on the shoulder of a deeper drop. Old road beds with ditches a few feet deeper than the roadway can also hold fish, as do shell bars off the larger channels. Use of a big-screen sonar and GPS mapping system makes it easy to scout out likely areas. Creek channels coming out of shallow flats that are spawning areas in late March and April can be particularly productive. As in all bass fishing, it’s a matter of doing a lot of scouting before the serious casting begins.

Most anglers fish the lures on 12- to 15-pound test fluorocarbon, which gives a better feel for the lure than more stretchy monofilament. Some of the lures give better action if an added snap swivel is added above the split ring; otherwise, a turtle-style loop knot is best for allowing maximum movement. Most anglers use a medium action rod, relatively slow, so that the hooks are more likely to stay put–glass composite rods, rather than pure graphite, are favored by serious rattlebait fans.

Favorite colors include silver, white and pearl, which imitate shad, as well as a brownish orange that some anglers believe looks somewhat like crawfish. Whatever the bass might think it is, the lipless crankbaits clearly look like food–they’re one of the best offers you can make until things start to warm a bit towards spring.