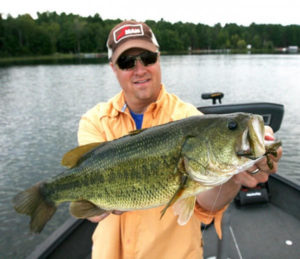 The legendary Ned Kehde isn’t likely to utter the phrase that’s made him famous; the term for the rig that’s forever transformed the bass fishing landscape. Actually, the chances of Kehde going third-person like some Prima donna wide receiver are roughly the same as his odds of playing in the NFL. That’s just Ned being Ned: the fact the humble Hall of Fame angler would rather credit those other fathers of finesse—Chuck Woods, Guido Hibdon, Harold Ensley, etc.—than acknowledge his own momentous role in bass fishing’s backstory.

Such modesty can be misinterpreted, but in Kehde’s case simply underscores the exceptional skill with which he practices the method known more broadly as ‘Midwest Finesse.’ Friend and former NASCAR driver Terry Bevins says, “Ned’s one of the best finesse anglers in the country. Put him in the back of the boat with one of his finesse jigs, and he’s likely to whoop your butt.”

To hear Kehde tell it, the bass-catching power of his “little jig” is so great there’s simply no reason to change it. “In years past, we’ve experimented with just about every new rigging refinement you can think of.” notes Kehde. “In the shallow impoundments we fish, none have been so fruitful as an exposed-hook, mushroom-style jig dressed with half a ZinkerZ or other finesse worm. Day after day, season after season, it inveigles dozens and dozens and dozens of bass.” 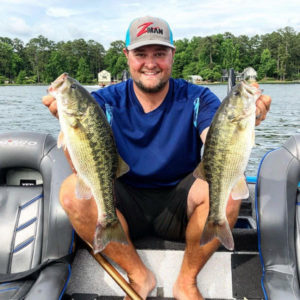 The ‘Ned-Miki Rig’ has scored big bags of largemouth, spotted and striped bass for pro angler and guide, Joey Nania.

Interestingly, the same simple motivation to catch more bass has inspired anglers across America to create unique and individualized versions of the Ned Rig framework—both in retrieve and the way they fasten a finesse bait to a hook.

Longtime Ned Rig fan Joey Nania, professional angler and Alabama based fishing guide, has devised a couple key mods to the presentation. Recently, he’s guided clients to loads of spotted, largemouth and striped bass, wielding a concoction he calls the Ned-Miki Rig. “As bass fans know, the Damiki Rig has been a money presentation for enticing shad-focused bass suspended in 15 to 30 feet,” says Nania. “But you need a really well-balanced, 90-degree jighead and a compact shad-shaped bait to pull it off. Having fished the Z-Man NedlockZ HD jighead for a lot of my regular Ned Rig fishing, I realized this head would really shine for ‘video-game’ fishing—working individual bass on sonar, vertically, playing cat-and-mouse. It’s versatile enough that you can cast the bait to suspended fish, too, just letting it glide and pendulum as you work it back to the boat.”

A 1/10- or 1/6-ounce NedlockZ HD, says Nania, melds perfectly with a Z-Man StreakZ 3.75, a bait he calls “one of the best small shad imitations ever. And because it’s made from ElaZtech, the bait’s super buoyant. When you pause and let the Ned-Miki soak, the bait maintains a natural horizontal posture. Similar fluke-style baits aren’t buoyant, making them ride tail-down, rather than hovering horizontal like a live shad.”

Northern anglers fish a similar method, keying on suspended or rock-hugging smallmouth bass. The Ned-Miki has even evolved into a superlative substitute for a dropshot rig, which isn’t quite so precise for big sluggish smallmouths hunkered down between boulders.

“Watch the bait drop on the sonar screen until it’s about 1 foot above the fish’s head,” Nania explains. “Hold the bait still. When a bass begins to rise and chase, lift the bait to take it away. Sometimes, a bass will chase the Ned-Miki up 15 or 20 feet, absolutely crushing it on an intercept course. Other times, you have to entice them a little, using the bait’s super-soft, high-action tail to close the deal. Almost like a dropshot, but even more dead-on.”

Going where no Ned Rig has gone before, Nania is ecstatic when he mentions another new finesse device. “What can I say about the Finesse BulletZ, man? This jighead is off-the-charts cool. Rig one with a Finesse TRD, MinnowZ or TRD CrawZ and fish simply can’t tear it off. I’ve had the same bait on the same jighead for the past week, and dozens of bass later, it’s still going strong.”

Made to snake Ned Rig style ElaZtech baits through the thickest cover, the Finesse BulletZ sports a subtle bullet-shaped head and a slender keel weight molded precisely onto a custom, heavy-duty size 1 VMC EWG hook. “People look at this jig and wonder how the heck you rig a bait without tearing it. It’s funny because it’s actually a non-issue with ElaZtech, which is pretty much tear-proof. And once the bait’s in place, it’s there until you take it off.

“Goes without saying that the bait’s weedless,” says Nania. “But I’m also just discovering how well the little jig skips under docks,” he adds. “Regardless of the cover— rocks, brush, grass, manmade structures, etc.—this is one incredible jig-bait combo for finessing big bass in places you couldn’t previously throw a Ned Rig.

“I like to rig a 1/10-ouncer with a TRD MinnowZ—Smelt and Hot Snakes are two of my favorite patterns—and skip it under docks. Rigging the same bait on a 1/6-ounce Finesse BulletZjig also shines for casting into deeper schools of bass.”

Nania notes how the jig’s keel weight makes the bait glide and slide horizontally, rather than nose-down. “It’s like some radical, improved version of the slider head, except this jig perfectly matches 2- to 4-inch finesse-style baits. And you can pull it right through the thickest brush piles with no problem at all.”

From southern impoundments to northern lakes and rivers, the Finesse BulletZ jig may be at its best when rigged with Z-Man’s authentic mini-crayfish bait, the 2.5-inch TRD CrawZ. “The TRD CrawZ is a subtle, unassuming little critter,” says professional angler Luke Clausen. “But rigged with the Finesse BulletZ jig, the bait rides in this freakishly lifelike, claws-up posture. Put it in the water and its buoyant little claws flap and wave, virtually taunting bass to bite—and they do,” Clausen laughs. 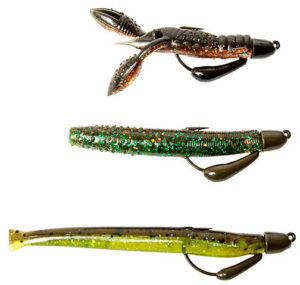 Blurring boundaries between Ned-style and other finesse presentations, creative anglers have concocted what we’ll call the Ned-Neko Rig. Coupling a Finesse TRD, Hula StickZ or other buoyant finesse bait with a Neko hook and Neko weight yields astonishing action, and an intriguing underwater posture.

Hooking configurations depend on cover and bass activity level. The simplest is to Texas-rig your chosen finesse bait onto a #1 to 2/0 Neko style hook. Finish the Neko-Ned Rig by inserting a 1/32- to 1/8-ounce Neko weight into the bait’s tail-end, resulting in a compelling pogo-stick-action along bottom. Also effective is a drag-and-deadstick retrieve, particularly in small, high-percentage zones.

Or, you can get extra wacky (pun intended), and hook the worm right through the middle, leaving the Neko weight in the tail. The toughness of ElaZtech even eliminates the need for an O-ring; just a 1/0 Gamakatsu Finesse Wide Gap hook, your favorite TRD and another alluring look bass can’t say no to. Ned inspired. Ned approved. 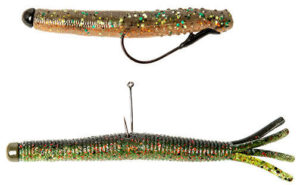