Editor’s Note: Today’s feature on the Electronically Aided Collision designation isn’t a joke. As pilots and long-distance truckers have long known, too-much attention to the electronics and too-little situational awareness can have horrible consequences.

by Frank Sargeant, Editor
from The Fishing Wire 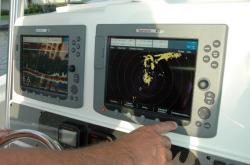 A ‘glass cockpit’ like this one is a wonderful asset to offshore fishing and navigation, but boaters can sometimes be seduced into watching the screens more than they keep a lookout ahead.

“Electronically Aided Collisions”, EAC’s, sounds like a joke, but they’re an actual new designation of Coast Guard accident descriptors. USCG says so many accidents are occurring as a result of the electronics many of us now have aboard–ostensibly to help us avoid accidents–that it made sense to set up a category for it, and of course this being the Coast Guard, they gave it an acronym.

The issue is basically the same as for those ashore who are unable to restrain themselves from texting while driving a vehicle–distracted attention has unfortunate results when you are responsible for piloting several tons of moving mass.

Afloat, though, there is some reason for us to be playing with our electronics–they are usually our only means of navigation offshore, as well as our all-important fish-finding tool–absolutely critical in reef fishing, and very helpful too with pelagic species that often hang around major bottom breaks, sea mounts and other structure. 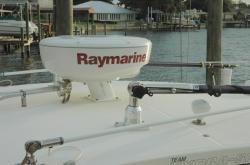 Radar makes it possible to operate safely after dark and in fog and rain, but a sharp eye ahead is always required when the boat is underway.

We depend on them for weather, for operation in low light and fog, to help us in locating aids to navigation (i.e. buoys), hazards and lots more–basically most offshore anglers would prefer to stay at the docks these days rather than attempt to fish or travel long distances without their electronic nav and sonar systems.

But in all this dependency, it’s easy to forget that the electronics are not a video game at home in the man-cave. A real-time lookout ahead every minute the boat is moving is a must to avoid consequences that range from just dumb–like running over a log and wiping out prop or lower unit–to catastrophic, like striking another boat or a fixed object.

The danger goes up exponentially with autopilots linked to the electronics. We quickly come to depend on them, in combination with the GPS, to drive the boat for us, avoiding the struggles with maintaining course that sometimes come in rough seas.

Radar overlaid on a GPS screen provides loads of information to the modern boater who can afford the full electronics package.

But, as an old skipper told me once, an autopilot has no brain, no eyes and no conscience–it will happily drive your boat right over a fleet of whale-watchers peacefully paddling their kayaks or a family pontoon boat out for a sight-seeking trip.

Don’t forget, too, that if you set the exact location of a marker as a waypoint, and then punch that waypoint into your autopilot and let the boat take you to it, the boat will very likely HIT the marker when you get there if you’re not alert.

Radar identifies ships and piers clearly, but may not mark–or may return a very dim echo–from a kayak–or a floating log.

Texting is less of an issue offshore where cell phones won’t work–but working to label a fishing site can also be an issue–best to simply “save” and then put in the descriptors when you’re safely shut down.

It’s also wise to remember that all electronics sooner or later break down. Constant exposure to the vibration, humidity and corrosion present around marine venues means they have a limited lifespan, and if you are depending on the unit to drive the boat at the moment when it gives up the ghost, you and your crew may be in big trouble.

Radar can also alert boaters to bad weather ahead, but there’s no substitute for eyes-on real-time information.

Sometimes, even when they’re working, they’re just plain wrong. My GPS invariably used to show me traveling right THROUGH a mile-long island when I drove down the Little Manatee River just off Tampa Bay.

They don’t keep track of their masters, either. Recently, former Miami Dolphins player Rob Konrad fell off his boat while fishing in South Florida. The boat was running on autopilot and promptly left Konrad behind. Fortunately, he was still a pretty athletic guy–he swam the 9 miles back to shore, arriving at 4 a.m.! The Coast Guard found his boat many miles away, still chugging along happily on autopilot.

Even far offshore, you can never take your eyes off the course ahead–boats show up out of nowhere. So do large chunks of floating debris, big enough to destroy your lower units.

Night operation is particularly hairy. I used to fish offshore occasionally with a great commercial reef fisherman who ran out there in a Cigarette type boat at 40 to 50 mph–at night! While he was perfectly happy to sit in the cabin and watch the radar at that speed, I was always a nervous wreck by the time we got to the ledges about dawn. (The decks would be littered with flying fish by the time we got there–they hit the cabin like baseballs as we sped along!)

Bottom line is that a “glass cockpit” is a wonderful thing, but our electronics are not yet even close to being set-and-forget; you are obligated, both morally and legally, to keep a lookout every moment your boat is underway, if you don’t want to become one of the Coast Guard’s EAC’s.