Trout Ulimited Looks Back on Successes and Challenges of 2018

By Chris Wood, President
Trout Unlimited
from The Fishing Wire 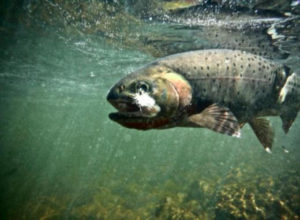 Conservation is a long game, so it is especially important to celebrate successes.

After decades of decline, 2018 may mark the year that we turned the corner on the recovery of Yellowstone cutthroat trout in Yellowstone Lake. The world’s first national park had lost more than 95 percent of its native cutts, and their path to extirpation looked as close as the mouth of the nearest non-native lake trout. Working with the park, and Yellowstone Forever, TU began supporting the commercial-grade fishing of lake trout in Yellowstone Lake (although the trapped lake trout have never been used for commercial purposes). Dave Sweet of Wyoming, who led our efforts, fished the park’s streams this past summer, and said cutties are everywhere. “The biggest fish caught was pushing 25 inches, healthy and fat. The average fish was 20-23 inches.”

TU-supported science helped to identify the best places to target invasive lake trout. TU scientists are also helping to revolutionize the recovery of imperiled native trout species. With support from NASA, TU worked with partners to develop a new spatial analysis that allows managers to determine extinction risks for Lahontan cutthroat trout. This tool could be a game-changer in helping move the conversation from stopping extinction of native trout to promoting recovery.

As state and federal agency commitments to science decline, the investments of TU and our partners in fisheries science become ever more important. For example, our partners at the USGS Leetown Science Center discovered that almost all brook trout populations in the eastern U.S. have a unique genetic signature. In the Southeast, almost all populations are isolated from one another, with essentially no gene flow. This makes the work of chapters and staff to remove obsolete dams and fix perched culverts more essential to the long-term health of brook trout and other wild and native trout.

Recovering the natural resiliency of rivers and streams is a top priority in the face of increased floods, fires and drought associated with climate change. The Big Wood River in Idaho has suffered through devastating fires and a massive flood in recent years. TU worked with the local flood control district to reconstruct a major irrigation diversion that was blown out by the flood, and in so doing they recovered the river’s natural floodplain and made future irrigation on the river much less ecologically damaging.

When volunteers and staff work together, magic happens. Consider the fact that advocacy efforts in Pennsylvania by TU staff and volunteers enabled us to secure wild trout status for 476 stream sections in the commonwealth totaling nearly 1,000 miles.

The future of conservation depends on engaging more kids, and the future of Trout Unlimited lies in our ability to diversify the organization. STREAM Girls, a program TU developed in partnership with the Girl Scouts USA, helps us to accomplish both objectives. The program employs STEM-education (science, technology, engineering, math) plus recreation and arts to engage girls while exploring their local streams. STREAM Girls grew into new regions in the last year, and the curriculum expanded to include exciting new technologies and elements of citizen science.

Not a lot happened in Congress in 2018, but a major win was reauthorization of the Farm Bill. This is a major bipartisan victory for private land conservation. Among other things, the Farm Bill cuts red tape to enable more and larger landscape-scale conservation; improves irrigation efficiency and watershed health; and funds restoration of small watersheds.

To be certain, we have our challenges in 2019. Chief among them are improving a backward-looking proposal to remove the protections of the Clean Water Act for 20 percent of the nation’s streams and 50 percent of its wetlands; continue the fight to protect Bristol Bay from industrial-scale mining; and pass an Omnibus Public Lands Bill to fully fund the Land and Water Conservation Fund and pass the Frank and Jeanne Moore Wild Steelhead Sanctuary Act.

Henry David Thoreau once wrote: “Though I do not believe that a plant will spring up where no seed has been, I have great faith in a seed.”

Your work in thousands of communities across America to protect, reconnect and restore the lands and waters that sustain us are seeds of hope. Your efforts to help a veteran to heal through time on the water or to teach kids about the wonders of the Lord’s creation are seeds to a better future.

Thoreau concluded: “Convince me that you have a seed there, and I am prepared to expect wonders.”